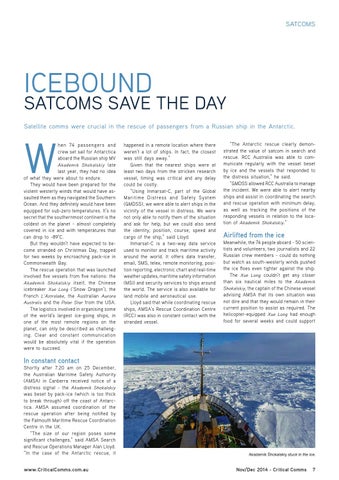 SATCOMS SAVE THE DAY Satellite comms were crucial in the rescue of passengers from a Russian ship in the Antarctic.

hen 74 passengers and crew set sail for Antarctica aboard the Russian ship MV Akademik Shokalskiy late last year, they had no idea of what they were about to endure. They would have been prepared for the violent westerly winds that would have assaulted them as they navigated the Southern Ocean. And they definitely would have been equipped for sub-zero temperatures. It’s no secret that the southernmost continent is the coldest on the planet - almost completely covered in ice and with temperatures that can drop to -89°C. But they wouldn’t have expected to become stranded on Christmas Day, trapped for two weeks by encroaching pack-ice in Commonwealth Bay. The rescue operation that was launched involved five vessels from five nations: the Akademik Shokalskiy itself, the Chinese icebreaker Xue Long (‘Snow Dragon’), the French L’Astrolabe, the Australian Aurora Australis and the Polar Star from the USA. The logistics involved in organising some of the world’s largest ice-going ships, in one of the most remote regions on the planet, can only be described as challenging. Clear and constant communication would be absolutely vital if the operation were to succeed.

happened in a remote location where there weren’t a lot of ships. In fact, the closest was still days away.” Given that the nearest ships were at least two days from the stricken research vessel, timing was critical and any delay could be costly. “Using Inmarsat-C, part of the Global Maritime Distress and Safety System (GMDSS), we were able to alert ships in the vicinity of the vessel in distress. We were not only able to notify them of the situation and ask for help, but we could also send the identity, position, course, speed and cargo of the ship,” said Lloyd. Inmarsat-C is a two-way data service used to monitor and track maritime activity around the world. It offers data transfer, email, SMS, telex, remote monitoring, position reporting, electronic chart and real-time weather updates, maritime safety information (MSI) and security services to ships around the world. The service is also available for land mobile and aeronautical use. Lloyd said that while coordinating rescue ships, AMSA’s Rescue Coordination Centre (RCC) was also in constant contact with the stranded vessel.

“The Antarctic rescue clearly demonstrated the value of satcom in search and rescue. RCC Australia was able to communicate regularly with the vessel beset by ice and the vessels that responded to the distress situation,” he said. “GMDSS allowed RCC Australia to manage the incident. We were able to alert nearby ships and assist in coordinating the search and rescue operation with minimum delay, as well as tracking the positions of the responding vessels in relation to the location of Akademik Shokalskiy.”

Airlifted from the ice Meanwhile, the 74 people aboard - 50 scientists and volunteers, two journalists and 22 Russian crew members - could do nothing but watch as south-westerly winds pushed the ice floes even tighter against the ship. The Xue Long couldn’t get any closer than six nautical miles to the Akademik Shokalskiy, the captain of the Chinese vessel advising AMSA that its own situation was not dire and that they would remain in their current position to assist as required. The helicopter-equipped Xue Long had enough food for several weeks and could support

In constant contact Shortly after 7.20 am on 25 December, the Australian Maritime Safety Authority (AMSA) in Canberra received notice of a distress signal - the Akademik Shokalskiy was beset by pack-ice (which is too thick to break through) off the coast of Antarctica. AMSA assumed coordination of the rescue operation after being notified by the Falmouth Maritime Rescue Coordination Centre in the UK. “The size of our region poses some significant challenges,” said AMSA Search and Rescue Operations Manager Alan Lloyd. “In the case of the Antarctic rescue, it

Akademik Shokalskiy stuck in the ice.