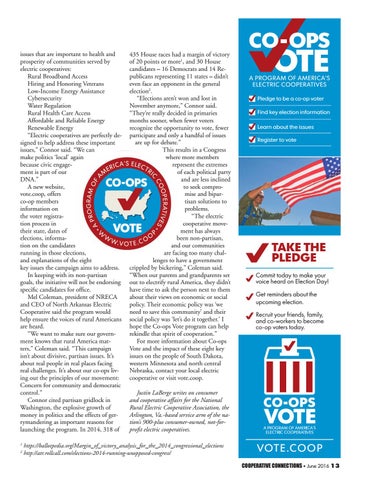 issues that are important to health and prosperity of communities served by electric cooperatives: Rural Broadband Access Hiring and Honoring Veterans Low-Income Energy Assistance Cybersecurity Water Regulation Rural Health Care Access Affordable and Reliable Energy Renewable Energy “Electric cooperatives are perfectly designed to help address these important issues,” Connor said. “We can make politics ‘local’ again because civic engagement is part of our DNA.” A new website, vote.coop, offers co-op members information on the voter registration process in their state, dates of elections, information on the candidates running in those elections, and explanations of the eight key issues the campaign aims to address. In keeping with its non-partisan goals, the initiative will not be endorsing specific candidates for office. Mel Coleman, president of NRECA and CEO of North Arkansas Electric Cooperative said the program would help ensure the voices of rural Americans are heard. “We want to make sure our government knows that rural America matters,” Coleman said. “This campaign isn’t about divisive, partisan issues. It’s about real people in real places facing real challenges. It’s about our co-ops living out the principles of our movement: Concern for community and democratic control.” Connor cited partisan gridlock in Washington, the explosive growth of money in politics and the effects of gerrymandering as important reasons for launching the program. In 2014, 318 of 1 2

435 House races had a margin of victory of 20 points or more1, and 30 House candidates – 16 Democrats and 14 Republicans representing 11 states – didn’t even face an opponent in the general election2. “Elections aren’t won and lost in November anymore,” Connor said. “They’re really decided in primaries months sooner, when fewer voters recognize the opportunity to vote, fewer participate and only a handful of issues are up for debate.” This results in a Congress where more members represent the extremes of each political party and are less inclined to seek compromise and bipartisan solutions to problems. “The electric cooperative movement has always been non-partisan, and our communities are facing too many challenges to have a government crippled by bickering,” Coleman said. “When our parents and grandparents set out to electrify rural America, they didn’t have time to ask the person next to them about their views on economic or social policy. Their economic policy was ‘we need to save this community’ and their social policy was ‘let’s do it together.’ I hope the Co-ops Vote program can help rekindle that spirit of cooperation.” For more information about Co-ops Vote and the impact of these eight key issues on the people of South Dakota, western Minnesota and north central Nebraska, contact your local electric cooperative or visit vote.coop.

Commit today to make your voice heard on Election Day! Get reminders about the upcoming election. Recruit your friends, family, and co-workers to become co-op voters today.