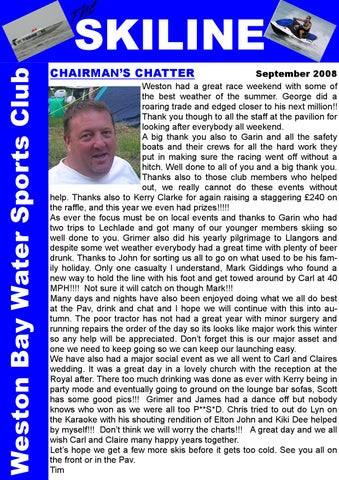 September 2008 Weston had a great race weekend with some of the best weather of the summer. George did a roaring trade and edged closer to his next million!! Thank you though to all the staff at the pavilion for looking after everybody all weekend. A big thank you also to Garin and all the safety boats and their crews for all the hard work they put in making sure the racing went off without a hitch. Well done to all of you and a big thank you. Thanks also to those club members who helped out, we really cannot do these events without help. Thanks also to Kerry Clarke for again raising a staggering £240 on the raffle, and this year we even had prizes!!!!! As ever the focus must be on local events and thanks to Garin who had two trips to Lechlade and got many of our younger members skiing so well done to you. Grimer also did his yearly pilgrimage to Llangors and despite some wet weather everybody had a great time with plenty of beer drunk. Thanks to John for sorting us all to go on what used to be his family holiday. Only one casualty I understand, Mark Giddings who found a new way to hold the line with his foot and get towed around by Carl at 40 MPH!!!! Not sure it will catch on though Mark!!! Many days and nights have also been enjoyed doing what we all do best at the Pav, drink and chat and I hope we will continue with this into autumn. The poor tractor has not had a great year with minor surgery and running repairs the order of the day so its looks like major work this winter so any help will be appreciated. Don’t forget this is our major asset and one we need to keep going so we can keep our launching easy. We have also had a major social event as we all went to Carl and Claires wedding. It was a great day in a lovely church with the reception at the Royal after. There too much drinking was done as ever with Kerry being in party mode and eventually going to ground on the lounge bar sofas, Scott has some good pics!!! Grimer and James had a dance off but nobody knows who won as we were all too P**S*D. Chris tried to out do Lyn on the Karaoke with his shouting rendition of Elton John and Kiki Dee helped by myself!!! Don’t think we will worry the charts!!! A great day and we all wish Carl and Claire many happy years together. Let’s hope we get a few more skis before it gets too cold. See you all on the front or in the Pav. Tim

Presidents Prattle. The Chairman and I have been ordered and Chris, we all know, must have loads of pics to put in this issue, so how could we refuse, As I write this it's p.......ing it down outside and I guess that sums up the summer so far. The lucky ones who have been out during the week have had the best of this years weather, albeit our National was the only flat one all season. Even Hunstanton called theirs off! Hopefully Rob's got the current standings but they show the youngsters getting better and our stalwarts having a good year. Doubt if we will be close to the Team Trophy this year but with one race left at Stone on 14th September who knows. Plenty of fun a frolics at the two lakes this year and they have both been used for improving and teaching newcomers and I'm sure we all thank John and Garin for organising them. Can't deny I've stood back this year to let Tim and the committee get on with it and looks like we are having a good year. Nice to just turn up and enjoy rather than missing everything. In fairness the only thing I missed this year so far is 3 hours of my life at the wedding reception for Carl & Claire. Probably a bad barrel of Strongbow and the fact that no one else on the table drank wine. Still plenty of time left this year for boating and maybe we'll get and Indian Summer (sunshine not Brum visitors) so make the most of it and look after the Tractor,

2008 Weston National. The sun was out, the sky was blue and the crowds turned out in their hundreds, the Club’s annual water ski race went off without a hitch, as usual. I only attended several pre race meetings so I cannot claim to have helped organise this years event, I know that with the absence of a sponsor the whole thing was organised on a shoestring, but other than the absence of the trimmings you would not have known. Everything started with the Press day on the Friday and HTV amongst others were down to give us some free publicity, The reporter fancied himself as a skier ad Rob Strick obliged towing him behind Tim’s new boat, Rob was interviewed from the boat in an amusing scene that saw James sitting in the observers seat perfectly still and still wearing his helmet, cue the “Stig” jokes! Amy was also interviewed and got much ribbing for the answer to the question of what would you like achieve with her answer of “not falling in” The video clip is on the club’s website. The Saturday saw quite a few boats out on the water practising for the race with some of the rescue boats

2008 Weston National. taking the chance for an early ski/wake board, I have never seen the water so busy pre race before, the evening saw plenty of drinking and eating with lots of sunburnt faces from the last two days (mine included). Sunday morning arrived and a later start was welcomed by all of the drinkers from the night before, We seemed to be extremely well organised and the water was reluctant to come in, waiting was the order of the day and so we waited, the races all went off without a hitch and I personally managed to rattle off over 2,500 photographs with the new camera, These are on the website in a low quality format, DVD’s are available from the website for £15 each, any club member that wants a copy can have one for a fiver (cost price), let me know if you do. A long weekend that saw Rob’s ankle swell up to twice it’s original size and Tim spending his Sunday doing the poster run on his own. Hopefully the results are in the newsletter well done to all involved yet another excellent event, here’s to next year.

Llangors. Tony celebrated his 40th birthday whilst visiting Llangors this year, the Grimers had already laid the camp out for him with a Burberry folding chair and a bottle of bubbly all sectioned off in an exclusion zone, some of Tony’s presents were enjoyed by all on the site, the 300 foot water balloon launcher went down well at our end of the camp, I’m not so sure that the receivers were best pleased (I Know John wasn’t). The weather it’s fair to say was not kind to us, this was for only the second time in nearly twenty years according to John, we did manage one full day on the lake and nearly all the camp ventured out, even Lucy and Dawn came over to the beach. Mark damaged his ankle trying to pull up on a mono but has vowed to try again once recovered and Pete pulled a muscle trying to mono ski as well, the lake isn’t always unkind, Ben managed to pull up on a mono whilst on the rope, well done Ben you looked great skiing and the grin on your face speaks volumes, shame about the tumble but at least the camera captured every moment of your flight!

Every picture tells a story.

Yet another bad hair day for the oldest swigger in town

Smiling for the camera has never been Tony’s strong point.

WESTON BAY WATER SPORTS CLUB The Skiline is the newsletter for members and is compiled every other month with contributions from the committee as well as members. If you would like to include anything in “The Skiline” drop an email to chris@westonski.co.uk and I will include it in the next issue. To keep costs down this e-newsletter is emailed for members to print if they wish or to save the environment, view online. Any member who does not have access to email or a PC can still receive “The Skilne” in print form by letting Chris know on 01934 511354.