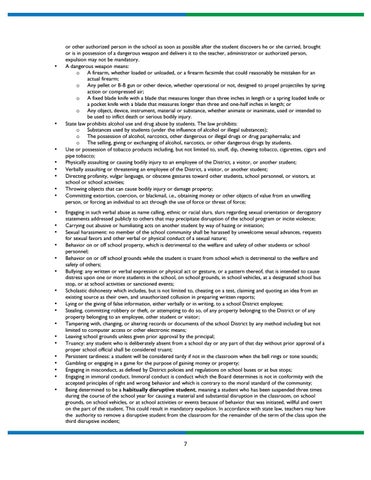 or other authorized person in the school as soon as possible after the student discovers he or she carried, brought or is in possession of a dangerous weapon and delivers it to the teacher, administrator or authorized person, expulsion may not be mandatory. A dangerous weapon means: o A firearm, whether loaded or unloaded, or a firearm facsimile that could reasonably be mistaken for an actual firearm; o Any pellet or B-B gun or other device, whether operational or not, designed to propel projectiles by spring action or compressed air; o A fixed blade knife with a blade that measures longer than three inches in length or a spring loaded knife or a pocket knife with a blade that measures longer than three and one-half inches in length; or o Any object, device, instrument, material or substance, whether animate or inanimate, used or intended to be used to inflict death or serious bodily injury. State law prohibits alcohol use and drug abuse by students. The law prohibits: o Substances used by students (under the influence of alcohol or illegal substances); o The possession of alcohol, narcotics, other dangerous or illegal drugs or drug paraphernalia; and o The selling, giving or exchanging of alcohol, narcotics, or other dangerous drugs by students. Use or possession of tobacco products including, but not limited to, snuff, dip, chewing tobacco, cigarettes, cigars and pipe tobacco; Physically assaulting or causing bodily injury to an employee of the District, a visitor, or another student; Verbally assaulting or threatening an employee of the District, a visitor, or another student; Directing profanity, vulgar language, or obscene gestures toward other students, school personnel, or visitors, at school or school activities; Throwing objects that can cause bodily injury or damage property; Committing extortion, coercion, or blackmail, i.e., obtaining money or other objects of value from an unwilling person, or forcing an individual to act through the use of force or threat of force; Engaging in such verbal abuse as name calling, ethnic or racial slurs, slurs regarding sexual orientation or derogatory statements addressed publicly to others that may precipitate disruption of the school program or incite violence; Carrying out abusive or humiliating acts on another student by way of hazing or initiation; Sexual harassment: no member of the school community shall be harassed by unwelcome sexual advances, requests for sexual favors and other verbal or physical conduct of a sexual nature; Behavior on or off school property, which is detrimental to the welfare and safety of other students or school personnel; Behavior on or off school grounds while the student is truant from school which is detrimental to the welfare and safety of others; Bullying: any written or verbal expression or physical act or gesture, or a pattern thereof, that is intended to cause distress upon one or more students in the school, on school grounds, in school vehicles, at a designated school bus stop, or at school activities or sanctioned events; Scholastic dishonesty which includes, but is not limited to, cheating on a test, claiming and quoting an idea from an existing source as their own, and unauthorized collusion in preparing written reports; Lying or the giving of false information, either verbally or in writing, to a school District employee; Stealing, committing robbery or theft, or attempting to do so, of any property belonging to the District or of any property belonging to an employee, other student or visitor; Tampering with, changing, or altering records or documents of the school District by any method including but not limited to computer access or other electronic means; Leaving school grounds unless given prior approval by the principal; Truancy: any student who is deliberately absent from a school day or any part of that day without prior approval of a proper school official shall be considered truant; Persistent tardiness: a student will be considered tardy if not in the classroom when the bell rings or tone sounds; Gambling or engaging in a game for the purpose of gaining money or property; Engaging in misconduct, as defined by District policies and regulations on school buses or at bus stops; Engaging in immoral conduct. Immoral conduct is conduct which the Board determines is not in conformity with the accepted principles of right and wrong behavior and which is contrary to the moral standard of the community; Being determined to be a habitually disruptive student, meaning a student who has been suspended three times during the course of the school year for causing a material and substantial disruption in the classroom, on school grounds, on school vehicles, or at school activities or events because of behavior that was initiated, willful and overt on the part of the student. This could result in mandatory expulsion. In accordance with state law, teachers may have the authority to remove a disruptive student from the classroom for the remainder of the term of the class upon the third disruptive incident; 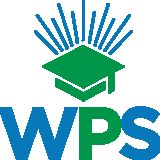