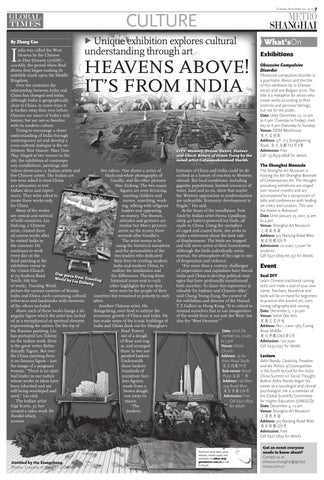 ndia was called the West Heaven by the Chinese in Han Dynasty (206BC– 220AD), the period when Buddhism first began making its indelible mark upon the Middle Kingdom. Over the centuries the relationship between India and China has changed and today, although India is geographically close to China, in some ways it is further away than ever before. Chinese are aware of India’s rich history, but are not so familiar with its modern culture. Trying to encourage a closer understanding of India through contemporary art and develop a cross-cultural dialogue is the exhibition West Heaven: Place Time Play. Staged at two venues in the city, the exhibition of contemporary installations, paintings and two videos. One shows a series of videos showcases 12 Indian artists and five Chinese artists. The Indian artblack-and-white photographs of ists were asked to treat China Gandhi, and the other pictures as a laboratory to test Mao Zedong. The two major Indian ideas and experifigures are seen lecturing, ences. They were asked to meeting children and create these works only nurses, marching, workfor China. ing, talking with religious Many of the works leaders and appearing are cynical and satirical on money. The themes, of both countries. Liu attitudes and gestures are Dahong, a Chinese similar but Mao’s pictures artist, created three arrive on the screen three oil canvas works after seconds after Gandhi’s. he visited India in The artist seems to be the summer. He using the historical narratives continues to work and the personalities of the every day on the two leaders who dedicated third painting at the their lives to creating modern exhibition venue in India and modern China, to the Union Church outline the similarities and One pie at 79 Suzhou Road the differences. Placing these ce from Travelin World b g y Liu Da South. His trio historical icons next to each hong. of works, Traveling World, other highlights the way they picture the various societies of Russia, were seen by the people of their India and China, each containing cultural countries but remained in polarity to each references and landmarks with elements other. of the others included. Another Chinese artist, Hu Above each of these works hangs a triXiangcheng, uses food to satirize the angular figure which the artist has includeconomic growth of China and India. He ed as a metaphysical or spiritual element has made some of the iconic buildings of representing the nation. On the top of India and China (look out for Shanghai’s the Russian painting, Liu Pearl Tower) has portrayed Leo Tolstoy; out of a dough on the Indian work, there of flour and sugis the great writer Rabinar, and arranged dranath Tagore. But over these in two susthe China painting there pended baskets. is no famous figure – just Underneath the image of a pregnant these baskets woman. “There is no spirihundreds of tual leader in our nation miniature facewhose works or ideas have less figures, been inherited and are made from a still being worshiped and brown dough, used,” Liu said. run away en The Indian artist masse. Gigi Scaria, 37, has “The created a video work No modern Parallel which screens

HEAVENS ABOVE! IT’S FROM INDIA

histories of China and India could be described as a history of reaction to Western stimuli. But local conditions, including gigantic populations, limited resources of water, land and so on, show that maybe the Western approaches to modernization are unfeasible. Economic development is fragile,” Hu said. At the heart of the installation Twin Souls by Indian artist Hema Upadhyay, chirp 40 battery-powered toy birds, all made in China. Using the metaphor of caged and crazed birds, she seeks to make a statement about the dark side of displacement. The birds are trapped and will never arrive at their hometowns. Although the birds individually seem normal, the atmosphere of the cage is one of desperation and violence. “For more than a century, challenges of imperialism and capitalism have forced India and China to develop political strategies that have profoundly transformed both societies. To share this experience is valuable for Indians and Chinese alike,” said Chang Tsong-Zung, the curator of the exhibition and director of the Hanart T Z Gallery in Hong Kong. “It is critical to remind ourselves that in our imagination of the world there is not just the West, but also the ‘West Heavens’.” Date: Until December 20, 10 am to 7 pm Venue: Union Church Address: 79 Suzhou Road South 南苏州路79号 Sub-venue: Novel Plaza 永新广场 Address: 128 Nanjing Road West 南京西路128号 Admission: Free Call 6327-2829 for details

What’sOn Exhibitions Obsessive Compulsive Disorder Obsessive compulsive disorder is a psychiatric illness and the title of this exhibition by 12 Chinese artists and one Belgian artist. The title is a metaphor for artists who create works according to their instincts and personal feelings, but not for the public. Date: Until December 12, 10 am to 6 pm (Tuesday to Friday), midday to 6 pm (Saturday to Sunday) Venue: DDM Warehouse 东大名创库 Address: 3/F, 713 Dongdaming Road, 东大名路713号3楼 Admission: Free Call 135-8573-0808 for details

The Shanghai Biennale The Shanghai Art Museum is hosting the 8th Shanghai Biennale of Contemporary Art. The thoughtprovoking exhibitions are staged over several months and are accompanied by a symposium of talks and conferences with leading art critics and curators. This year the theme is Rehearsal. Date: Until January 23, 2011, 9 am to 4 pm Venue: Shanghai Art Museum 上海美术馆 Address: 325 Nanjing Road West 南京西路325号 Admission: 20 yuan, 5 yuan for students Call 6327-2829 ext 257 for details

Lecture Ashis Nandy: Creativity, Freedom and the Politics of Cosmopolitan is the fourth lecture for the IndiaChina Summit on Social Thought. Author Ashis Nandy began his career as a sociologist and clinical psychologist. He is a member of the Global Scientific Committee for Higher Education (UNESCO). Date: December 4, 10 am Venue: Shanghai Art Museum 上海美术馆 Address: 325 Nanjing Road West 南京西路325号 Admission: Free Call 6327-2829 for details Got an event everyone needs to know about? Contact us at whatsonshanghai@globaltimes.com.cn