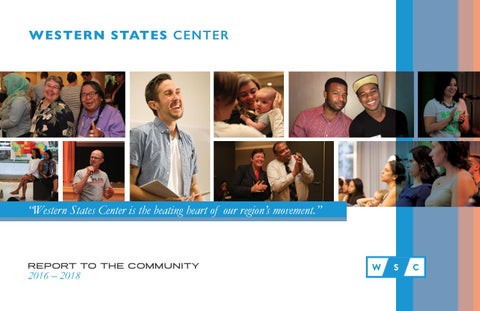 “Western States Center is the beating heart of our region’s movement.”

WESTERN STATES CENTER BY THE NUMBERS

Since founded to build progressive movement in the West

14 Graduates of our 11th cohort of WILD: Western Institute for Leadership Development

A MESSAGE FROM WESTERN STATES CENTER BOARD & STAFF

JULY 2018 FOR 30 YEARS, Western States Center has worked with you – our dedicated partners and donors – to build progressive movement in the West. Together, we’ve accomplished so much. But with the rise of white nationalism and regressive Trump administration actions threatening all the gains we’ve made, we knew we needed to do more. Over the past year we’ve been retooling Western States Center to meet the

extraordinary challenges of this moment in time. We’ve reorganized our work into four areas of strategic focus that position us to work simultaneously on two fronts: challenging the terrain upon which white nationalists are building their movements, while strengthening our own movements to withstand this attack.

Thank you for your dedication to this work. The need has never been greater.

Please read on for details of what we accomplished with your support over the past two years, and the innovative strategies we’re now piloting.

BASED IN THE PACIFIC NORTHWEST & MOUNTAIN STATES, WE WORK NATIONWIDE TO STRENGTHEN INCLUSIVE DEMOCRACY. THERE ARE FOUR PILLARS OF OUR WORK...

We strengthen the organizing capacity of often-marginalized communities, with a particular emphasis on gender justice, racial justice, and tribal sovereignty work.

We provide training, leadership development, and organizational capacity support to social movements and leaders committed to diversity, equity, and inclusion.

We convene culture makers to shift the narrative and use culture as a vehicle for base- and power-building in non-traditional social change spaces.

We assist communities and civil society to uphold the rule of law by effectively responding to social movements that exploit bigotry and intolerance.

WHILE THERE ARE FOUR DISTINCT PILLARS TO OUR WORK, OUR PROGRAMMING BRINGS ALL OF THESE STRATEGIES TO THE TABLE.

Our Movement Building work makes sure the communities most directly affected by inequities are at the head of the table. Leadership Development teaches the nuts and bolts of how to build the table.

Shifting Culture transforms what’s served at the table, and the story that’s told about it. And Defending Democracy compels us to build a new table, one in which everyone has a stake in a truly inclusive democracy where all people can live, love, and work free from fear.

Oregon Governor Kate Brown with members of Western States Centerâ&#x20AC;&#x2122;s We are BRAVE program after signing the Reproductive Health Equity Act into law in 2017.

VICTORIES & FUTURE DIRECTIONS FOR 30 YEARS, OUR WORK HAS ADVANCED SOCIAL, RACIAL, AND ECONOMIC JUSTICE BY CONVENING, DEVELOPING, ORGANIZING, AND SUPPORTING THE COMMUNITIES MOST AFFECTED BY INEQUITIES. WE’VE PLAYED A CATALYTIC ROLE, WORKING WITH COMMUNITY PARTNERS TO BUILD PEOPLE-CENTERED MOVEMENTS, DEVELOP NEW LEADERS, AND SHIFT CULTURE - WITH OUR EYES ON THE PRIZE OF AN INCLUSIVE DEMOCRACY WHERE PEOPLE CAN LIVE,

People don’t move towards a future they cannot conceptualize, particularly one where they are unable to see their own place as a respected part of it. I don’t know what Martin Luther King Jr. saw when he told us ‘I’ve been to the mountaintop’ but you can tell by the tone of his voice, it’s something beautiful and breathtaking. I want to see it for myself. Don’t you? But to really get to that mountain top, we can’t leave anyone behind who wants to come.”

LOVE, AND WORK FREE FROM FEAR. 7

LANDMARK GENDER JUSTICE VICTORY Grassroots leaders in our gender justice program, We are BRAVE, won a landmark policy victory, securing essential reproductive health care for all Oregonians, regardless of gender identity, immigration status, or income. The culmination of seven years of organizing, our approach is now a model for other campaigns across the nation.

TWO-SPIRIT INCLUSION + K-12 REFORM Our tribal sovereignty program brought together six northwest Tribes and tribally affiliated organizations to adopt more inclusive policies honoring Two-Spirit and LGBTQ tribal citizens. And we engaged a range of education and community organizations to secure unanimous passage of a new law requiring that Tribal history and sovereignty are taught in all Oregon schools.

RESISTANCE ACROSS THE WEST We supported organizers across the West to strengthen movement capacity in the face of regressive policies, including convening 20 organizations in Idaho in the wake of the 2016 election; providing strategic and financial support to the WyoSayNo! coalition opposing private immigration prisons; and helping Arizona’s Repeal Coalition make regional connections among organizations working on immigration issues.

NOW, IN 2018, WE’RE BROADENING OUR FOCUS TO BRING THE MOVEMENT-BUILDING LESSONS FORGED IN THE PACIFIC NORTHWEST AND MOUNTAIN STATES TO COMMUNITIES AROUND THE COUNTRY. PARTNERING WITH LOCAL, STATE, AND NATIONAL ORGANIZATIONS, WE’RE BEGINNING TO BRING NEW CONSTITUENCIES TO THE TABLE, WHILE ENSURING THAT THE COMMUNITIES MOST AFFECTED ARE CENTRAL TO BUILDING SOLUTIONS. 9

DEVELOPING LEADERS OUR TRAINING AND LEADERSHIP DEVELOPMENT PROGRAMS HAVE BECOME THE GOLD STANDARD IN THE REGION, SERVING COMMUNITY-BASED ORGANIZATIONS, LABOR UNIONS, AND TRIBAL AND MUNICIPAL GOVERNMENTS:

REGIONAL CONVENING We brought together 562 community leaders and organizers from over 250 organizations in 19 states for our three-day biennial conference, AMP: Activists Mobilizing for Power.

GENDER JUSTICE LEADERS We are BRAVE worked intensively with program leaders to design and implement organizing campaigns, and the BRAVE cohort in Oregonâ&#x20AC;&#x2122;s Marion County, seat of the state capitol, developed a 14-piece gender justice training curriculum, mostly in Spanish.

TRAININGS WITH TRIBAL LEADERS We worked with the Potlatch Fund to lead trainings in Tribal communities in Idaho, Montana, Oregon, and Washington.

ADDRESSING INTERNAL DIVISION We helped equip leaders in communities across the country and in our region to strengthen their own practices and prevent internal movement division by honing their analysis and skills around antisemitism, sexual harassment, and sexual assault.

" I can’t imagine where Idaho’s progressive community would be without the care and support of Western States Center, and their willingness to ensure we have the tools we need to keep oppression and injustice at bay." ~ Kathy Griesmyer, WILD Class of 2011-2012

MOVING TOWARDS 2019, OUR TRAINING AND LEADERSHIP DEVELOPMENT PROGRAMS WILL EXPAND TO NEW CONSTITUENCIES TO BROADEN THE BASE OF RESISTANCE TO SYSTEMIC BIAS AND WHITE NATIONALISM, WHILE CONTINUING TO INVEST DEEPLY IN SUPPORTING SOCIAL MOVEMENTS AND LEADERS COMMITTED TO DIVERSITY, EQUITY, AND INCLUSION. 11

SHIFTING CULTURE THE STORIES WE TELL ARE CRITICAL TO HELPING PEOPLE ENVISION A PLURALISTIC WORLD IN WHICH EVERYONE CAN LIVE, LOVE, AND WORK FREE FROM FEAR. AS DIVISIVE NARRATIVES REINFORCE A FEAR OF THE OTHER, WE’RE PARTNERING WITH ARTISTS AND CULTURE MAKERS TO TELL A DIFFERENT STORY, ONE IN WHICH EVERY ONE HAS A STAKE. OUR WORK TO SHIFT CULTURE INCLUDES:

A CULTURE-SHIFT MODEL A shared histor y is our most important currency in today’s classroom. Honoring and recognizing the histor y and contributions of all Americans. Creating civic leaders for the future by teaching our shared histor y today. Our success with Tribal History: Shared History, the campaign for Oregon Senate Bill 13 led out of Western States Center to establish a new statewide curriculum, was cited by Reclaiming Native Truth as an example of how to do culture-shift work.

AMPLIFYING UNHEARD VOICES Within a pro-choice movement historically seen as led by white, middle-class women, We are BRAVE has elevated the voices of women of color, immigrants, and transgender and gender-nonconforming people through art projects, staff assistance at youth summer camps, videos, workshops, policy campaigns, and national news media.

90K MILES OF SKIN IN THE GAME After publishing Skin in the Game: How Anti-Semitism Animates White Nationalism and As White Supremacy Falls Down, White Nationalism Stands Up, Executive Director Eric K. Ward logged over 90,000 miles speaking to dozens of gatherings of human rights, Jewish, Muslim, anti-hate, philanthropic, media, and civic leaders to advance a deeper understanding of today’s culture war.

“This Toolkit provides a powerful lantern that will help light the way. It now awaits your courage, political will, and perseverance to make the change that will create a community that embraces equality and freedom.” ~ From Tribal Equity Toolkit 3.0: Tribal Resolutions and Codes to Support Two Spirit and LGBTQ Justice in Indian Country, co-edited by Se-ah-dom Edmo, Sovereignty Program Director, March 2017

IN THE COMING MONTHS, WATCH FOR INNOVATIONS IN HOW WE CONVENE CULTURE-MAKERS TO SHIFT THE NARRATIVE AND USE CULTURE AS A VEHICLE FOR BASE-AND POWER-BUILDING IN NON-TRADITIONAL SOCIAL CHANGE SPACES. 13

DEFENDING DEMOCRACY OUR MOVEMENT-BUILDING, LEADERSHIP DEVELOPMENT, AND CULTURE SHIFT WORK HAS ALWAYS BEEN IN SERVICE OF A FULLYINCLUSIVE DEMOCRACY. NOW, WITH ONE-THIRD OF AMERICANS SUPPORTING THE CORE IDEAS OF WHITE NATIONALISM, WE’VE LAUNCHED A NEW PROGRAM TO PROVIDE STRATEGIC SUPPORT TO COMMUNITIES RESPONDING TO FEAR-BASED SOCIAL MOVEMENTS THAT EXPLOIT BIGOTRY AND INTOLERANCE, INCLUDING: RN

MURDERS ON THE MAX TRAIN After two intervening bystanders were murdered, and another seriously injured, in a racist, Islamophobic attack by a white nationalist on two young women on a Portland MAX train, we partnered with local and national groups to provide training on hate violence and the roots of white nationalism at several large events; we then convened a regional strategy session with leaders from five states to counter this growing threat.

PUSH BACK ON PROUD BOYS When an African-American teenager was arrested and charged with felony assault in Vancouver, Washington after being attacked by members of the Proud Boys,

a white nationalist gang, Western States Center called on the prosecutor to drop the charges. Four days later he did.

SHUTTING DOWN A BIGOT We worked with the Southern Poverty Law Center to support local groups in shutting down the remaining four stops on anti-Muslim bigot John Guandolo's Midwest tour less than 24 hours after it began. We also succeeded, with Muslim Advocates and other partners, in getting a Texas law enforcement agency to rescind the accreditation it provided for Guandolo’s training

A NATIONAL VOICE To stem the influence of anti-immigrant, white nationalist policies that harm communities, we organized dozens of national civil rights and community groups calling on Governors to reject President Trump’s plans to deploy the National Guard to the southern border by declining to send state troops. And we joined with partners across the country to call on U.S. Senators to deny confirmation of an anti-immigrant State Department nominee.

“Governors must speak out and condemn bigotry-driven vigilantism before it turns into tragedy. Hate violence poses a serious threat to asylum-seekers, immigrants, and U.S. citizens alike.”

WITH SIGNIFICANT NEW FOUNDATION INVESTMENTS IN OUR WORK TO COUNTER WHITE NATIONALISM, WE ARE ENGAGING WITH ACTIVISTS FROM AUTHORITARIAN REGIMES AROUND THE WORLD TO LEARN AND APPLY LESSONS FROM THEIR RESISTANCE THROUGH A DEEP DIVE IN OREGON AND PARTNERING WITH COMMUNITIES ACROSS THE COUNTRY. 15

OUR WORK WAS CITED IN:

THANK YOU, FU NDERS THESE FOUNDATIONS AND ORGANIZATIONS HAVE INVESTED IN OUR WORK THROUGH GRANTS AND SPECIAL GIFTS:

The DBEK Fund of the Common Counsel Foundation

“IT’S INSPIRING TO HEAR FROM ORGANIZERS WHO HAVE BEEN DOING MOVEMENT-BUILDING WORK FOR DECADES. WE NEED EXAMPLES OF HOW THIS WORK AND OUR RELATIONSHIPS CAN BUILD AND SUSTAIN MOVEMENTS OVER THE YEARS.” 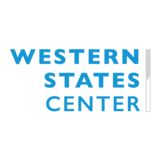 For 30 years, Western States Center has worked with you – our dedicated partners and donors – to build progressive movement in the West. Tog...

For 30 years, Western States Center has worked with you – our dedicated partners and donors – to build progressive movement in the West. Tog...