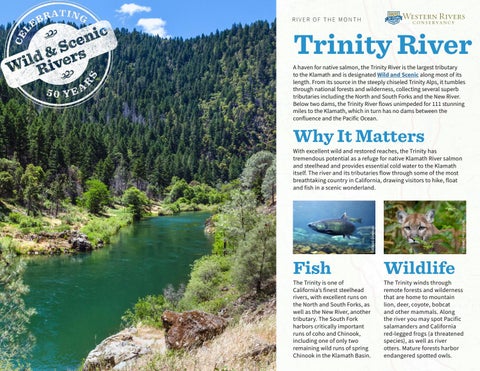 A haven for native salmon, the Trinity River is the largest tributary to the Klamath and is designated Wild and Scenic along most of its length. From its source in the steeply chiseled Trinity Alps, it tumbles through national forests and wilderness, collecting several superb tributaries including the North and South Forks and the New River. Below two dams, the Trinity River flows unimpeded for 111 stunning miles to the Klamath, which in turn has no dams between the confluence and the Pacific Ocean.

With excellent wild and restored reaches, the Trinity has tremendous potential as a refuge for native Klamath River salmon and steelhead and provides essential cold water to the Klamath itself. The river and its tributaries flow through some of the most breathtaking country in California, drawing visitors to hike, float and fish in a scenic wonderland.

The Trinity is one of Californiaâ&#x20AC;&#x2122;s finest steelhead rivers, with excellent runs on the North and South Forks, as well as the New River, another tributary. The South Fork harbors critically important runs of coho and Chinook, including one of only two remaining wild runs of spring Chinook in the Klamath Basin.

The Trinity winds through remote forests and wilderness that are home to mountain lion, deer, coyote, bobcat and other mammals. Along the river you may spot Pacific salamanders and California red-legged frogs (a threatened species), as well as river otters. Mature forests harbor endangered spotted owls.

Much of the Trinity River basin lies within the Shasta-Trinity National Forest and Six Rivers National Forest, which provide plentiful ways to fish, boat, hike, backpack and ride horses. Several highways and a network of unimproved roads lead to riverside access and trails that thread from the high elevations to the river corridor.

The main-stem Trinity is a rafter’s and kayaker’s playground, with Class III fun from Pigeon Point to Cedar Flat (Class V below this). On the South Fork, experienced boaters revel in the scenic Class-IV “Three Bears” run, starting below Big Slide Campground. Outfitters include Bigfoot Rafting and Trinity River Rafting.

The rugged, alpine paradise of the Trinity Alps is a bucketlist experience for many hikers, with wildflowers peaking in July and August. The South Fork National Recreational Trail traces remote, wild stretches of the South Fork for eight miles. Other trails abound within national forests and wilderness.

THE WRC STORY The largest and wildest arm of the Trinity, the celebrated South Fork Trinity River once boasted incredible runs of native steelhead, Chinook and coho salmon, but logging, road-building and sedimentation have reduced wild fish returns. Today, the South Fork is still home to one of only two remaining native runs of spring Chinook in the Klamath basin, and is the subject of extensive restoration efforts. To bolster these efforts, Western Rivers Conservancy bought 170 acres along the river’s most productive spawning reach for steelhead and Chinook. In 2009, we conveyed this land to the surrounding Shasta-Trinity National Forest to prevent logging and landslides and help ensure clear, healthy waters for the Trinity’s imperiled fish.

Getting there Highway 36 provides access to the South Fork and more remote upper river reaches and the Trinity Alps.

River of the Month - Trinity River

River of the Month - Trinity River