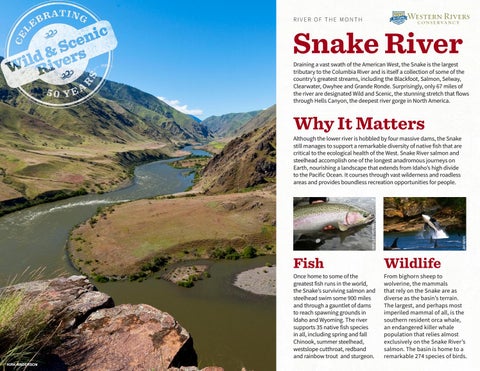 Draining a vast swath of the American West, the Snake is the largest tributary to the Columbia River and is itself a collection of some of the country’s greatest streams, including the Blackfoot, Salmon, Selway, Clearwater, Owyhee and Grande Ronde. Surprisingly, only 67 miles of the river are designated Wild and Scenic, the stunning stretch that flows through Hells Canyon, the deepest river gorge in North America.

Once home to some of the greatest fish runs in the world, the Snake’s surviving salmon and steelhead swim some 900 miles and through a gauntlet of dams to reach spawning grounds in Idaho and Wyoming. The river supports 35 native fish species in all, including spring and fall Chinook, summer steelhead, westslope cutthroat, redband and rainbow trout and sturgeon. KIRK ANDERSON

Although the lower river is hobbled by four massive dams, the Snake still manages to support a remarkable diversity of native fish that are critical to the ecological health of the West. Snake River salmon and steelhead accomplish one of the longest anadromous journeys on Earth, nourishing a landscape that extends from Idaho’s high divide to the Pacific Ocean. It courses through vast wilderness and roadless areas and provides boundless recreation opportunities for people.

From bighorn sheep to wolverine, the mammals that rely on the Snake are as diverse as the basin’s terrain. The largest, and perhaps most imperiled mammal of all, is the southern resident orca whale, an endangered killer whale population that relies almost exclusively on the Snake River’s salmon. The basin is home to a remarkable 274 species of birds.

With so much river to explore, fish to catch, trails to hike and rapids to run, the only problem will be choosing your adventure. In Idaho, plentiful access to the Snake River and its tributaries exists on public lands including the Salmon-Challis, Bitterroot, Nez Pierce-Clearwater, Sawtooth, and Payette National Forests. Oregon’s Wallowa Whitman National Forest is home to the Hells Canyon National Recreation Area.

Capture the sprawling beauty of Hells Canyon— and some great photos—at roadside overlooks like Hat Point and Buckhorn Tower Viewpoint, which showcase the knife-edge ridges of Imnaha River country.

The wild and scenic reach within Hells Canyon is a stunning setting for chasing steelhead, sturgeon, trout and non-native bass. Anadromous fish (including salmon and steelhead) are cut off from the upper Snake River and its tributaries by Hells Canyon Dam. The upper basin is mostly about trout, especially on storied Snake River tributaries like the Henry’s Fork and the South Fork Snake.

Hells Canyon is famous for its long wilderness floats through a veritable geologic cathedral towering 5,000 to 8,000 feet overhead. Boaters put in below Hells Canyon Dam for a three- to seven-day trip, with multiple takeout points before Heller Bar. For a fun four-day trip, put in at Hammer Creek, on the Salmon River, and experience the lower Salmon River canyon for 50 miles before encountering its spectacular confluence with the Snake. Permits are required (self-issued at Hammer Creek; lottery elsewhere). Outfitters include Winding Waters River Expeditions and Canyon Outfitters.

Hells Canyon is best reached from state routes 82 and 86 (off of Oregon I-84) or from Idaho Route 95. To reach the upper basin and tributaries, you can follow various state routes from of I-84, I-15 and I-90.

THE WRC STORY Western Rivers Conservancy has worked throughout the Snake River basin to protect critical fish and wildlife habitat and provide new public access for recreationists. These efforts include permanent protection of prime salmon rearing habitat on the Upper Salmon River; a game-changing project for Chinook on Catherine Creek; protection of the popular Minam River boater put-in at the Minam/Wallowa Confluence; the recreational gateway into Hells Canyon; and the Snake River/Grande Ronde confluence. Together, these projects have preserved popular recreation sites, conserved habitat for Snake River salmon and steelhead and key habitat for elk, deer, eagle, bear and bighorn sheep. Currently, WRC is acquiring a ranch along four miles of the Snake River near Lewiston, Idaho, to protect crucial lambing habitat for upwards of 50 to 80 percent of the Hells Canyon herd of bighorn sheep.

River of the Month - Snake River

River of the Month - Snake River