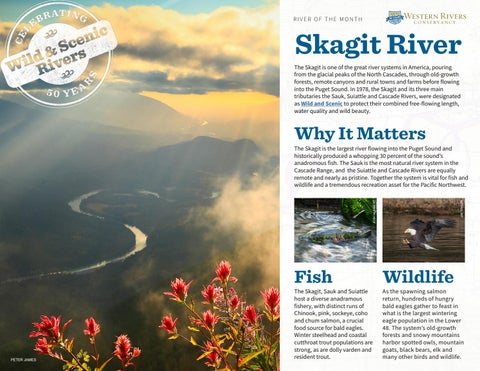 The Skagit is one of the great river systems in America, pouring from the glacial peaks of the North Cascades, through old-growth forests, remote canyons and rural towns and farms before flowing into the Puget Sound. In 1978, the Skagit and its three main tributaries the Sauk, Suiattle and Cascade Rivers, were designated as Wild and Scenic to protect their combined free-flowing length, water quality and wild beauty.

The Skagit is the largest river flowing into the Puget Sound and historically produced a whopping 30 percent of the soundâ&#x20AC;&#x2122;s anadromous fish. The Sauk is the most natural river system in the Cascade Range, and the Suiattle and Cascade Rivers are equally remote and nearly as pristine. Together the system is vital for fish and wildlife and a tremendous recreation asset for the Pacific Northwest.

As the spawning salmon return, hundreds of hungry bald eagles gather to feast in what is the largest wintering eagle population in the Lower 48. The systemâ&#x20AC;&#x2122;s old-growth forests and snowy mountains harbor spotted owls, mountain goats, black bears, elk and many other birds and wildlife.

With endless scenic wonders, the Skagit system features plenty of road access, boater put-ins, trails and campsites. Its upper reaches lie within North Cascades National Park; the Mt. Baker-Snoqualmie and Okanogan-Wenatchee National Forests; and the Glacier Peak and Henry M. Jackson Wilderness Areas. The lower Skagit is dotted with picturesque towns along Route 20 in the Wild and Scenic River corridor.

Abundant, impossibly scenic trails await you, like the White Pass-Pilot Ridge Loop, a 30-mile backpacking route from the ancient forests of the North Fork Sauk up to the Pacific Crest. The Suiattle River Trail winds above its namesake stream through lush, old-growth forests. North Fork Sauk Falls is one of many hikes off Mountain Loop Hwy.

The Skagit is one of the world’s legendary steelhead streams and birthplace of the Skagit cast (a breed of fly casting that uses heavy lines and big flies). But fish runs have been in steep decline, and the river now opens only seldomly. Emerald Water Anglers is a local guide service and excellent resource.

A winter float on the lower Skagit is one of the best ways to view eagles. For splashy, Class II summer fun on the upper Skagit, start at Goodell Creek. For wild whitewater on the Sauk, put in at the White Chuck or Lower Sauk Boat Launch (a site WRC protected). The Suiattle features a premier Class III wilderness run from Sulphur Creek to Rat Trap Bridge and on to the Sauk. Many outfitters lead day-long adventures. Best Times of Year to Visit Subject to WDFW regulations Salmon Fishing: Steelhead Fishing: Subject to WDFW regulations Year-round Boating: Nov to Feb Eagle Viewing:

Each January, the Skagit Eagle Festival features eagle watching stations at the Skagit River Bald Eagle Interpretive Center and other locations off Route 20. Remember to bring the binoculars!

Getting There Hwy 20 traces the Skagit into North Cascades National Park (where the road closes in winter). Route 530 follows the Sauk. Near the Sauk River Bridge, go east on FR 26 (Suiattle River Rd) to access the Suiattle. South of Darrington, follow the Mountain Loop Highway to reach the Sauk’s upper forks.

THE WRC STORY While the upper reaches of the Skagit system are protected, downstream logging and development have taken their toll. Starting in 1990, WRC took the lead with the U.S. Forest Service to ensure these streams remain wild and scenic havens. WRC acquired over 2,300 acres along the Skagit, including four islands and backwater sloughs critical to salmon and steelhead. To protect the Sauk’s worldclass fishery, WRC bought 154 acres of mining claims in the Henry M. Jackson Wilderness Area in 1994 to prevent disastrous gold mining. In 1998, we purchased 26 acres at the Sauk River Bridge to establish the much-needed Lower Sauk Boat Launch. In 2000, WRC protected the confluence of the Sauk and Suiattle Rivers from logging that would have degraded high-quality salmon spawning areas. All of these lands are now protected within national forests and wilderness areas.

River of the Month - Skagit River

River of the Month - Skagit River