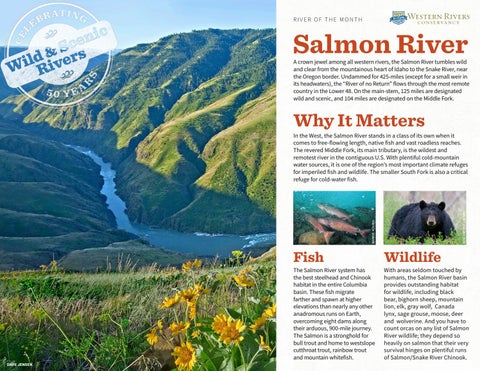 A crown jewel among all western rivers, the Salmon River tumbles wild and clear from the mountainous heart of Idaho to the Snake River, near the Oregon border. Undammed for 425-miles (except for a small weir in its headwaters), the “River of no Return” flows through the most remote country in the Lower 48. On the main-stem, 125 miles are designated wild and scenic, and 104 miles are designated on the Middle Fork.

In the West, the Salmon River stands in a class of its own when it comes to free-flowing length, native fish and vast roadless reaches. The revered Middle Fork, its main tributary, is the wildest and remotest river in the contiguous U.S. With plentiful cold-mountain water sources, it is one of the region’s most important climate refuges for imperiled fish and wildlife. The smaller South Fork is also a critical refuge for cold-water fish.

The Salmon River system has the best steelhead and Chinook habitat in the entire Columbia basin. These fish migrate farther and spawn at higher elevations than nearly any other anadromous runs on Earth, overcoming eight dams along their arduous, 900-mile journey. The Salmon is a stronghold for bull trout and home to westslope cutthroat trout, rainbow trout and mountain whitefish. DAVE JENSEN

With areas seldom touched by humans, the Salmon River basin provides outstanding habitat for wildlife, including black bear, bighorn sheep, mountain lion, elk, gray wolf, Canada lynx, sage grouse, moose, deer and wolverine. And you have to count orcas on any list of Salmon River wildlife; they depend so heavily on salmon that their very survival hinges on plentiful runs of Salmon/Snake River Chinook.

The Salmon River delivers world-class whitewater, outstanding wildlife encounters and the opportunity to truly escape civilization. Its centerpiece is the Middle Fork, in the 2.3 million-acre Frank Church-River of No Return Wilderness in the Salmon-Challis National Forest. The basin also spans the Payette, Sawtooth, and Nez Perce-Clearwater National Forests.

The Middle Fork is quite simply the finest multi-day wilderness float in the West. The incredible six-day, 100-mile trip begins at Boundary Creek, with more than 100 class III-IV rapids and gorgeous side hikes. You can also boat the Lower Salmon River gorges over four days to meet the impressive Snake River confluence. Idaho River Journeys, Winding Waters River Expeditions and Northwest Rafting Co. are among the best guides out there.

An anglers dream, the Salmon River offers hundreds of miles of epic trout, salmon and steelhead fishing, including arguably the best catch-and-release fishing in the nation on the Middle Fork. The Little Salmon as well as tributaries in the Stanley Basin can be excellent steelhead destinations. Timing depends on peak runoff.

THE WRC STORY At the headwaters of the Salmon River, snowcapped peaks tower over small tributaries that serve as some of best nurseries for salmon and steelhead in the Snake-Columbia basin. WRC is protecting a series of properties on these tributaries to ensure plentiful water and habitat for fish. In the Sawtooth National Recreation Area, WRC safeguarded critical reaches of Pole Creek in 2016 and Goat and Meadow Creeks in 2018. On Goat and Meadow Creeks, we transferred key water rights to the State of Idaho to keep them permanently in-streamâ&#x20AC;&#x201D;the first time in state history. Now we are working to conserve a haven for imperiled salmon at Cape Horn Ranch, at the source of the Middle Fork, placing significant water back in-stream for Chinook and steelhead. In 2014, we safeguarded access to the boating put-in/ take-out at Pine Bar and conserved important fish habitat on the mainstem Salmon River.

The towns of Stanley and Salmon are launch points to access remote reaches of the Upper Salmon and Middle Fork via Highway 93 and Forest Service roads. The Highway 95 corridor traces much of the lower Salmon, with convenient access to boater put-ins and camp sites.

The remote and spectacular Middle Fork of the Salmon River Trail follows the Middle Fork for nearly 100 miles. In the Sawtooth National Recreation Area, explore the beautiful mountain vistas on trails like the Stanley Lake Creek Trail, which ascends to a set of waterfalls that rage with snow melt in June. The Iron Creek Trailhead leads to postcard-perfect views of Sawtooth Lake reflecting Mount Regan above.

River of the Month - Salmon River

River of the Month - Salmon River