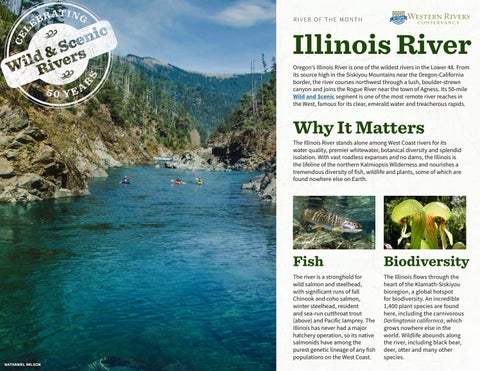 Illinois River Oregonâ&#x20AC;&#x2122;s Illinois River is one of the wildest rivers in the Lower 48. From its source high in the Siskiyou Mountains near the Oregon-California border, the river courses northwest through a lush, boulder-strewn canyon and joins the Rogue River near the town of Agness. Its 50-mile Wild and Scenic segment is one of the most remote river reaches in the West, famous for its clear, emerald water and treacherous rapids.

The Illinois River stands alone among West Coast rivers for its water quality, premier whitewater, botanical diversity and splendid isolation. With vast roadless expanses and no dams, the Illinois is the lifeline of the northern Kalmiopsis Wilderness and nourishes a tremendous diversity of fish, wildlife and plants, some of which are found nowhere else on Earth.

The river is a stronghold for wild salmon and steelhead, with significant runs of fall Chinook and coho salmon, winter steelhead, resident and sea-run cutthroat trout (above) and Pacific lamprey. The Illinois has never had a major hatchery operation, so its native salmonids have among the purest genetic lineage of any fish populations on the West Coast.

The Illinois flows through the heart of the Klamath-Siskiyou bioregion, a global hotspot for biodiversity. An incredible 1,400 plant species are found here, including the carnivorous Darlingtonia californica, which grows nowhere else in the world. Wildlife abounds along the river, including black bear, deer, otter and many other species.

By foot or by boat, the Illinois’ raw beauty is a feast for the eyes in every shade of green, with countless waterfalls, formidable rapids and beautiful campsites. While more developed reaches are easily accessed near Cave Junction, Oregon, the river’s greatest treasures await those who seek out its remote Wild and Scenic reaches within the Rogue River–Siskiyou National Forest and Kalmiopsis Wilderness.

The Illinois is legendary on the West Coast for its extreme whitewater and total isolation. The four-day, 31-mile, expert-only wilderness run from Miami Bar to Oak Flat features 150 rapids, many of them Class-IV and one legendary Class-V drop: the Green Wall. Outfitters include Momentum River Expeditions, Northwest Rafting Company and ARTA River Trips.

While access isn’t easy, the Illinois can reward anglers with big winter steelhead, summer “half-pounders” and the chance to have a wild stretch of river all to themselves. Access is good via the Illinois River Trail or from Illinois River Road, outside Selma. Wild trout can be caught in the upper river. Artificial flies and lures only; catch and release. Best Times of Year to Visit Trout Fishing: After Spring runoff Steelhead: Dec-March Boating: April and May

One of the most magnificent hikes in the region is the challenging Illinois River Trail, which traces 28 miles of the river, bisects the Kalmiopsis Wilderness and delivers awesome views of the canyon, wildlife and wildflowers. Campsites lie along the trail, and day hikes are possible.

Getting there The river’s more developed upper reaches are easily accessed off of Highway 199 near Cave Junction. To access the remote Wild and Scenic reaches, take Hwy 199 to Selma. Turn west on Illinois River Road (5070), which traces the river for nearly 20 miles and provides access to trails, fishing holes and campsites.

Western Rivers Conservancy has taken major steps to protect the Illinois River’s wild beauty and its clean, cold headwaters. In 2003, WRC acquired 871 acres along the Illinois River near its confluence with the Rogue, protecting a vital stretch of the Wild and Scenic River corridor. Then, in 2006, WRC bought an 870-acre ranch along Deer Creek, the largest source of cold, clean water for the Illinois. In 2008, we conveyed the property, along with its ranch house, to the Siskiyou Field Institute as a permanent home for its educational and research programs. Situated amidst rare biological diversity, the property now provides a one-of-a-kind classroom for people to explore the wonders of the Klamath-Siskiyou region.

River of the Month - Illinois River

River of the Month - Illinois River