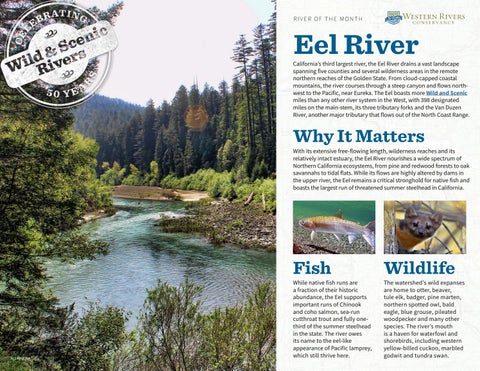 California’s third largest river, the Eel River drains a vast landscape spanning five counties and several wilderness areas in the remote northern reaches of the Golden State. From cloud-capped coastal mountains, the river courses through a steep canyon and flows northwest to the Pacific, near Eureka. The Eel boasts more Wild and Scenic miles than any other river system in the West, with 398 designated miles on the main-stem, its three tributary forks and the Van Duzen River, another major tributary that flows out of the North Coast Range.

While native fish runs are a fraction of their historic abundance, the Eel supports important runs of Chinook and coho salmon, sea-run cutthroat trout and fully onethird of the summer steelhead in the state. The river owes its name to the eel-like appearance of Pacific lamprey, which still thrive here.

With its extensive free-flowing length, wilderness reaches and its relatively intact estuary, the Eel River nourishes a wide spectrum of Northern California ecosystems, from pine and redwood forests to oak savannahs to tidal flats. While its flows are highly altered by dams in the upper river, the Eel remains a critical stronghold for native fish and boasts the largest run of threatened summer steelhead in California.

With the spring melt comes plentiful Class II-III rapids. A popular four-day trip begins at Dos Rios, located at the confluence of the Middle Fork Eel and the main stem, and takes you 47 miles through the Eel River Canyon to Alderpoint. For spectacular bird watching, kayak the Eel River estuary around Cock Robin Island, north of Ferndale.

The Eel is re-emerging as a premier steelhead destination, with hardfighting fish that are worth the effort. Chinook salmon arrive in August and often hold in the lower river until flows allow them to move upstream. Most fishing happens by boat near Fortuna, but you can also seek out spots on tributaries like the Van Duzen, reachable from the Highway 101 bridge.

THE WRC STORY In 2012, Western Rivers Conservancy protected a key portion of the Eel River estuary, one of the most important estuaries on California’s North Coast. WRC purchased 440 acres at the mouth of the Eel River to transform a former dairy farm into protected fish and waterfowl habitat. We transferred the land to the California Department of Fish and Wildlife to rejuvenate habitat for more than 30 species of fish, including salmon and cutthroat trout, and to reestablish feeding and nesting sites for shorebirds like western yellow-billed cuckoo and marbled godwit. With the land conserved, the state removed levies and tide gates to rejuvenate the area’s mosaic of tidal flats, sloughs, marshes and seasonal wetlands—altogether enhancing one of the most productive salmon nurseries on How to Help the North Coast.

Many trails access the river, with breathtaking waterfalls and deep summer swimming holes. Some of the best treks are in the Yolla Bolly-Middle Eel Wilderness, including southern portions of the epic Bigfoot Trail, which traverses 360 miles of the coastal and Klamath Mountains.

Highway 101 roughly traces the main course of the river north and south, with primary access to upstream reaches within national forests and wilderness areas via Highways 36 and 162 east and west.

River of the Month - Eel River

River of the Month - Eel River