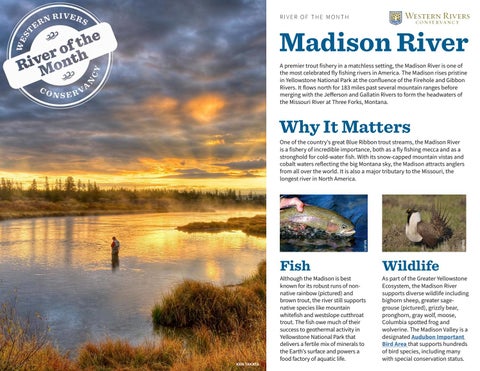 Madison River A premier trout fishery in a matchless setting, the Madison River is one of the most celebrated fly fishing rivers in America. The Madison rises pristine in Yellowstone National Park at the confluence of the Firehole and Gibbon Rivers. It flows north for 183 miles past several mountain ranges before merging with the Jefferson and Gallatin Rivers to form the headwaters of the Missouri River at Three Forks, Montana.

One of the countryâ&#x20AC;&#x2122;s great Blue Ribbon trout streams, the Madison River is a fishery of incredible importance, both as a fly fishing mecca and as a stronghold for cold-water fish. With its snow-capped mountain vistas and cobalt waters reflecting the big Montana sky, the Madison attracts anglers from all over the world. It is also a major tributary to the Missouri, the longest river in North America.

Although the Madison is best known for its robust runs of nonnative rainbow (pictured) and brown trout, the river still supports native species like mountain whitefish and westslope cutthroat trout. The fish owe much of their success to geothermal activity in Yellowstone National Park that delivers a fertile mix of minerals to the Earthâ&#x20AC;&#x2122;s surface and powers a food factory of aquatic life.

The Madison offers plenty of walk-and-wade fishing, including Three Dollar Bridge (protected by WRC in 2002), as well as boater put-ins and camping along Highway 287 between West Yellowstone and Ennis, Montana. The Bear Trap Canyon section runs through the Lee Metcalf Wilderness, and the river ends in the historic Missouri Headwaters State Park.

The Madison offers plenty of gentle water for drift boats, rafts and tubes (Varney Bridge is a popular launch). Experts float stretches like Bear Trap Canyon, which features nine miles of Class III and IV drops like the tumultuous Kitchen Sink. Below Quake Lake, several miles of challenging rapids were created when a 1959 earthquake dammed the river.

Connect with 15-plus-inch browns and rainbows along the classic reach known as the “Fifty-mile Riffle,” which extends from Raynolds Pass and Three Dollar Bridge down to the Wild West town of Ennis. If nothing else, you’ll take in the panoramic views of the broad, sagebrush valley. There’s also excellent fall fishing on the Madison within Yellowstone National Park. PATTY PICKETT

Bear Trap Canyon has Everything, including the Kitchen Sink (Billings Gazette) Top 10 Madison River Fly Selection for July (Fins and Feathers) Five Tips for Fishing the Salmonfly Hatch on the Madison (Montana Angler)

The Bear Trap National Recreational Trail near Bozeman traces nine miles of the Madison as it surges through Bear Trap Canyon within the spectacular Lee Metcalf Wilderness. Anglers often hike in to fish this reach, and you can camp along the trail.

THE WRC STORY Madison River fishing is at its best near Three Dollar Bridge, where jagged mountains rise above the river’s crystal waters and a $3 parking fee provides access to world-class fly fishing. When access to Three Dollar Bridge was threatened by private real estate development in 2002, Western Rivers Conservancy joined the local fly fishing and conservation communities to save a seven-square-mile property known as Candlestick Ranch. WRC bought the crucial 100-acre river-front portion of the ranch, including three miles of Madison River shoreline centered on Three Dollar Bridge, along with significant riparian, spring creek and wetland habitats. We then facilitated a conservation easement over the remaining 4,300 acres of the ranch to guarantee access to one of Montana’s premier fishing sites and conserve an important piece of the Madison Valley.

River of the Month - Madison River

River of the Month - Madison River