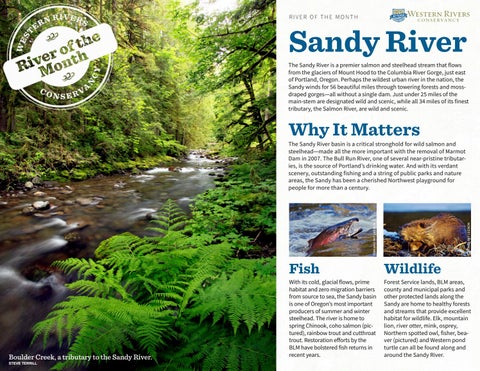 The Sandy River is a premier salmon and steelhead stream that flows from the glaciers of Mount Hood to the Columbia River Gorge, just east of Portland, Oregon. Perhaps the wildest urban river in the nation, the Sandy winds for 56 beautiful miles through towering forests and mossdraped gorges—all without a single dam. Just under 25 miles of the main-stem are designated wild and scenic, while all 34 miles of its finest tributary, the Salmon River, are wild and scenic.

Boulder Creek, a tributary to the Sandy River. STEVE TERRILL

With its cold, glacial flows, prime habitat and zero migration barriers from source to sea, the Sandy basin is one of Oregon’s most important producers of summer and winter steelhead. The river is home to spring Chinook, coho salmon (pictured), rainbow trout and cutthroat trout. Restoration efforts by the BLM have bolstered fish returns in recent years.

The Sandy River basin is a critical stronghold for wild salmon and steelhead—made all the more important with the removal of Marmot Dam in 2007. The Bull Run River, one of several near-pristine tributaries, is the source of Portland’s drinking water. And with its verdant scenery, outstanding fishing and a string of public parks and nature areas, the Sandy has been a cherished Northwest playground for people for more than a century.

Forest Service lands, BLM areas, county and municipal parks and other protected lands along the Sandy are home to healthy forests and streams that provide excellent habitat for wildlife. Elk, mountain lion, river otter, mink, osprey, Northern spotted owl, fisher, beaver (pictured) and Western pond turtle can all be found along and around the Sandy River.

Escape to a wild river sanctuary just 25 miles from downtown Portland, and you’ll find plenty of opportunities to hike, bike, float and cast a line. The upper Sandy River basin lies within the Mount Hood Wilderness and Salmon-Huckleberry Wilderness. Downstream, the river is studded with public nature areas including Dodge, Oxbow, Dabney and Glenn Otto parks, as well as the conservation and recreation corridor that Western Rivers Conservancy established with the BLM.

The classic whitewater paddle is the Inner Gorge, with its sheer basalt walls, housesized boulders and hanging moss gardens, but it’s a difficult and very technical Class IV-V reach from the former Marmot Dam site to Revenue Bridge. Downstream, a less technical yet still scenic Class II-III float connects Dodge Park to Oxbow Park, but should only be floated with someone experienced and who knows the rapids. Oxbow to Dabney is a fun, gentle summer float.

Oxbow Park offers 12 miles of trails through ancient forests, with views of spawning salmon in October. You can see the old Marmot Dam site on a six-mile trail starting at Marmot Bridge in the BLM’s Marmot Recreation Site (a WRC project). The Salmon River Trail traces this stream through towering old-growth and into the Salmon-Huckleberry Wilderness. Ramona Falls and McNeil Point are also not to be missed. www.westernrivers.org

The Sandy is year-round anglers’ playground renowned for its Chinook and coho salmon runs and its hard-fighting (and equally hard to catch) wild steelhead. Spring Chinook season peaks in June, the coho run is at its prime in September and October, and winter steelheading is best January through March. Dodge, Oxbow and Dabney all offer great bank fishing and wellmaintained boat ramps.

THE WRC STORY WRC has been working for two decades to create a conservation and recreation corridor along the Sandy and Little Sandy rivers. Since 1999 we’ve protected over 5,000 acres along 17 miles of river in partnership with Portland General Electric and the BLM. In 2007, PGE removed Marmot Dam on the Sandy River and later the Little Sandy Dam on the Little Sandy River. As part of this effort, WRC conserved thousands of former PGE lands, creating opportunities for habitat restoration and new access for people to fish, paddle and explore the Sandy. Recently, we expanded the BLM’s world-class Sandy Ridge Trail, and we continue to protect more habitat for fish and wildlife. Thanks to our partners at BLM and PGE, and the work of many others, we’ve witnessed a steady comeback for both rivers, especially their runs of wild coho salmon and winter steelhead.

River of the Month - Sandy River

River of the Month - Sandy River