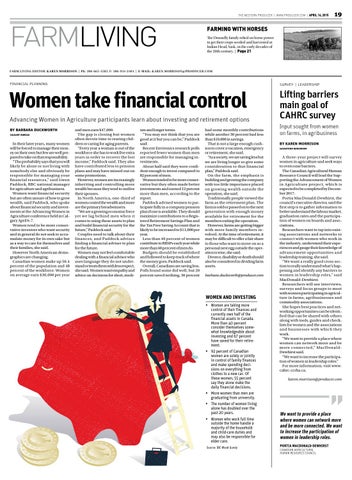 FARMING WITH HORSES The Donnelly family relied on horse power to get their crops seeded and harvested at Indian Head, Sask., in the early decades of the 20th century. | Page 21

In their later years, many women will be forced to manage their money on their own but few are well prepared to take on that responsibility. “The probability says that you will likely be alone or not living with somebody else and obviously be responsible for managing your financial resources,” said Gwen Paddock, RBC national manager for agriculture and agribusiness. Women want financial security but are often unsure of how to grow wealth, said Paddock, who spoke about financial security and investments at the Advancing Women in Agriculture conference held in Calgary April 6-7. Women tend to be more conservative investors who want security and in general do not seek to accumulate money for its own sake but as a way to care for themselves and their families, she said. However North American demographics are changing. Canadian women make up 50.4 percent of the population and 48 percent of the workforce. Women on average earn $30,000 per year

and men earn $47,000. The gap is closing but women often devote time to rearing children or caring for aging parents. “Every year a woman is out of the workforce she has to work five extra years in order to recover the lost income,” Paddock said. They also have contributed less to pension plans and may have missed out on some promotions. However, women are increasingly inheriting and controlling more wealth because they tend to outlive their spouses. In North America, one-third of women control the wealth and more are the primary breadwinners. “We are a growing economic force yet we lag behind men when it comes to using those assets to plan and build financial security for the future,” Paddock said. Couples need to talk about their finances, and Paddock advises finding a financial adviser to plan for the future. Women may not feel comfortable dealing with a financial advisor who uses language they do not understand or treats them with less respect, she said. Women want empathy and advice on decisions for short, medi-

um and longer terms. “You may not think that you are good at it but you can be,” Paddock said. Recent Environics research polls reported fewer women than men are responsible for managing investments. About half said they were confident enough to invest compared to 82 percent of men. Women tended to be more conservative but they often made better investments and earned 12 percent more than men, according to the report. Paddock advised women to participate fully in a company pension plan if one is available. They should maximize contributions to a Registered Retirement Savings Plan and the Tax Free Saving Account that is likely to be increased to $11,000 per year. Less than 40 percent of women contribute to RRSPs each year while more than 60 percent of men do. Budgets should be established and followed to keep track of where the money goes, Paddock said. Overall, Canadians are saving less. Polls found some did well, but 20 percent saved nothing, 30 percent

had some monthly contributions while another 30 percent had less than $10,000 in savings. That is not a large enough cushion to cover a vacation, emergency or retirement, she said. “As a society, we are saving less but we are living longer so give some consideration to that financial plan,” Paddock said. On the farm, the emphasis is building and growing the company with too little importance placed on growing wealth outside the operation, she said. Traditionally people viewed the farm as the retirement plan. The farm is sold or passed on to the next generation with enough money available for retirement for the members exiting the operation. However, farms are getting bigger with more family members involved. At the time of retirement, it may be difficult to offer a fair share to those who want to move on so a personal nest egg outside the operation is wise, she said. Divorce, disability or death should also be considered in dividing farm assets. barbara.duckworth@producer.com

WOMEN AND INVESTING • Women are taking more control of their finances and currently own half of the financial assets in Canada. More than 40 percent consider themselves somewhat knowledgeable about investing and 67 percent have saved for their retirement. • 92 percent of Canadian women are solely or jointly in control of family finances and make spending decisions on everything from clothes to a new car. Of these women, 55 percent say they alone make the daily financial decisions.

Input sought from women on farms, in agribusiness BY KAREN MORRISON SASKATOON NEWSROOM

A three-year project will survey women in agriculture and seek ways to overcome barriers. The Canadian Agricultural Human Resource Council will lead the Supporting the Advancement of Women in Agriculture project, which is expected to be completed by December 2017. Portia MacDonald-Dewhirst, the council’s executive director, said the first step is to gather information to better understand the labour market, graduation rates and the participation of women on boards and associations. Researchers want to tap into existing associations and networks to connect with women who work in the industry, understand their experiences and gauge their knowledge of advancement opportunities and leadership training, she said. “We want a really good cross section to really understand what’s happening and identify any barriers to women in leadership roles,” said MacDonald-Dewhirst. Researchers will use interviews, surveys and focus groups to meet with women participating in agriculture in farms, agribusinesses and commodity associations. She hopes best practices and networking opportunities can be identified that can be shared with others along with tools, guides and checklists for women and the associations and businesses with which they work. “We want to provide a place where women can network more and be more connected,” MacDonaldDewhirst said. “We want to increase the participation of women in leadership roles.” For more information, visit www. cahrc-ccrha.ca. karen.morrison@producer.com

• More women than men are graduating from university. • The number of women living alone has doubled over the past 20 years. • Women who work full time outside the home handle a majority of the household and child-care duties and may also be responsible for elder care. Source: IBC Wood Gundy

We want to provide a place where women can network more and be more connected. We want to increase the participation of women in leadership roles. PORTIA MACDONALD-DEWHIRST CANADIAN AGRICULTURAL HUMAN RESOURCE COUNCIL 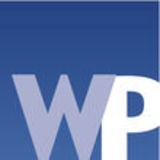