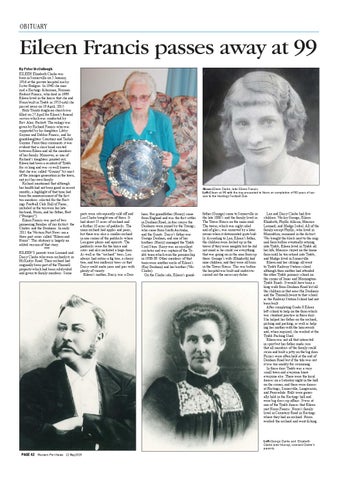 Eileen Francis passes away at 99 By Peter McCullough EILEEN Elizabeth Clarke was born in Somerville on 5 January, 1916 at the private hospital run by Sister Hodgins. In 1940 she married a Hastings fisherman, Norman Herbert Francis, who died in 1999. Eileen lived in the house that she and Norm built in Tyabb in 1953 until she passed away on 19 April, 2015. Holy Trinity Anglican church was filled on 27 April for Eileen’s funeral service which was conducted by Rev. Alex. Packett. The eulogy was given by Richard Francis who was supported by his daughters Libby Gaynor and Debbie Francis, and his granddaughters Courtney and Taylah Gaynor. From their comments it was evident that a close bond existed between Eileen and all the members of her family. Moreover, as one of Richard’s daughters pointed out, Eileen had been a resident of Tyabb for so long and was so well known that she was called “Granny” by most of the younger generation in the town, not just her own family. Richard mentioned that although her health had not been good in recent months, a highlight of that time had been the announcement of the first ten members selected for the Hastings Football Club Hall of Fame; included in the ten were her late husband, Norm, and his father, Bert (“Pompey”). Eileen Francis was part of two pioneering families of our district: the Clarkes and the Denhams. In early 2011 the Western Port News ran a three part series called “Eileen and Norm”. This obituary is largely an edited version of that story. *** EILEEN’S parents were Leonard and Daisy Clarke who were orchardists in McKirdys Road. Their orchard had originally been part of the Thornell property which had been subdivided and given to family members. Some

Above: Eileen Clarke, later Eileen Francis. Left: Eileen at 95 with the tray presented to Norm on completion of 50 years of service to the Hastings Football Club

parts were subsequently sold off and Len Clarke bought one of those. It had about 25 acres of orchard and a further 10 acres of paddocks. The main orchard had apples and pears, but there was also a smaller orchard in one corner of the paddocks where Len grew plums and apricots. The paddocks were for the horse and cows and also included a large dam. As well as the “orchard” trees, Len always had extras-a fig tree, a cherry tree, and two mulberry trees-so that Daisy could make jams and pies with plenty of variety. Eileen’s mother, Daisy, was a Den-

ham. Her grandfather (Henry) came from England and was the first settler in Denham Road; in due course the Denhams were joined by the Youngs, who came from South Australia, and the Grants. Daisy’s father was George Denham, and one of her brothers (Harry) managed the Tyabb Cool Store. Harry was an excellent cricketer and was captain of the Tyabb team which won the premiership in 1938-39. Other members of that team were another uncle of Eileen’s (Ray Denham) and her brother (Wes Clarke). On the Clarke side, Eileen’s grand-

father (George) came to Somerville in the late 1880’s and the family lived in The Tower House on the main road. The tower, which was eight sided and of glass, was removed by a later owner when it deteriorated quite badly. According to Len, Eileen’s father, the children were locked up in the tower if they were naughty but he did not mind as he could see everything that was going on in the area from up there. George’s wife (Elizabeth) had nine children, and they were all born in the Tower House. This was before the hospital was built and midwives carried out the necessary duties.

Len and Daisy Clarke had five children: Wesley George, Eileen Elizabeth, Phyllis Allison, Maurice Leonard, and Madge Isobel. All of the family except Phyllis, who lived in Moorabbin, remained in the district: Wes bought the block next to the original farm before eventually retiring into Tyabb, Eileen lived in Tyabb all her life, Maurice stayed on the home farm until he too retired into Tyabb, and Madge lived in Somerville. Eileen and her siblings all went to Tyabb Railway Station school although their mother had attended the other Tyabb primary school on the corner of Jones and MorningtonTyabb Roads. It would have been a long walk from Denham Road but all the children in that area (the Denhams and the Thornells)went to that school as the Railway Station School had not been built. After completing Grade 8 Eileen left school to help on the farm which was standard practice in those days. She helped her father on the orchard, picking and packing, as well as helping her mother with the housework and, when required, she worked at the Tyabb Packing Shed. Eileen was not all that interested in sport but her father made sure that all members of the family could swim and built a jetty on the big dam. Picnics were often held at the end of Denham Road but if the tide was out it was too muddy for swimming. In those days Tyabb was a very small town and everyone knew everyone else. There were the local dances on a Saturday night in the hall on the corner, and there were dances at Hastings, Somerville, Langwarrin, and Pearcedale. Balls were generally held in the Hastings hall and were big dress-up affairs. It was at one of the Tyabb dances that Eileen met Norm Francis. Norm’s family lived in Cemetery Road in Hastings where they had an orchard. Norm worked the orchard and went fishing.