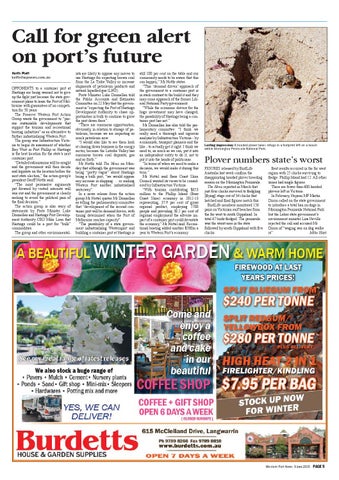 Call for green alert on port’s future Keith Platt keith@mpnews.com.au OPPONENTS to a container port at Hastings are being warned not to give up the fight just because the state government plans to lease the Port of Melbourne with guarantees of no competition for 50 years. The Preserve Western Port Action Group wants the government to “pursue sustainable developments that support the tourism and recreational boating industries” as an alternative to further industrialising Western Port. The group was Infrastructure Victoria to begin its assessment of whether Bay West in Port Phillip or Hastings is the best location for the state’s next container port. “Detailed submissions will be sought and the government will then decide and legislate on the location before the next state election,” the action group’s president Geoff Nottle said. “The most persuasive arguments put forward by vested interests will win out and the government is clearly seeking to avoid the political pain of the final decision.” The action group is also wary of statements by Ports Minister Luke Donnellan and Hastings Port Development Authority CEO Mike Lean that Hastings could be a port for “bulk” commodities. The group and other environmental-

ists are likely to oppose any moves to use Hastings for exporting brown coal from the La Trobe Valley or increase shipments of petroleum products and natural liquefied gas (LNG). Ports Minister Luke Donnellan told the Public Accounts and Estimates Committee on 22 May that the government is “expecting the Port of Hastings Development Authority to chase opportunities in bulk to continue to grow the port down there”. “There are enormous opportunities, obviously, in relation to storage of petroleum, because we are importing so much petroleum now. “I would also like to see them look at chasing down business in the energy sector, because the Latrobe Valley has enormous brown coal deposits, gas and so forth.” Mr Nottle told The News on Monday that although the government was being “pretty vague” about Hastings being a bulk port, “we would oppose any increase in shipping … or making Western Port another industrialised waterway”. In a news release from the action group Mr Nottel quotes Mr Donnellan as telling the parliamentary committee that “development of the second container port will be demand driven, with timing determined when the Port of Melbourne reaches capacity”. “The possibility of a state government industrialising Westernport and building a container port at Hastings is

still 100 per cent on the table and our community needs to be aware that this can happen,” Mr Nottle states. “This ‘demand driven’ approach of the government to a container port is in stark contrast to the build it and they may come approach of the former Liberal National Party government. “While the economic drivers for the huge investment may have changed, the possibility of Hastings being a container port has not.” Mr Donnellan has also told the parliamentary committee: “I think we really need a thorough and rigorous analysis by Infrastructure Victoria - by economists, transport planners and the like - to actually get it right. I think we need to, as much as we can, put it into an independent entity to do it, not to put it into the hands of politicians. “In terms of when we need to make a decision, we would make it during this term.” Mr Nottel said Bass Coast Shire Council wanted its views to be considered by Infrastructure Victoria. “With tourism contributing $653 million to the Phillip Island (Bass Coast Shire) economy in 2012-13 representing, 37.9 per cent of gross regional product, employing 5700 people and providing 38.2 per cent of regional employment the adverse impact of a container port could devastate the economy,” Mr Nottel said. Recreational boating added another $500m a year to Western Port’s economy.

Lasting impression: A hooded plover takes refuge in a footprint left on a beach within Mornington Peninsula National Park.

Plover numbers state’s worst FIGURES released by BirdLife Australia last week confirm the disappointing hooded plover breeding season on the Mornington Peninsula. The News reported in March that just four chicks survived to fledgling [flying] stage out of 34 chicks that hatched and final figures match this. BirdLife members monitored 156 pairs on Victorian surf beaches from the far west to south Gippsland. In total 67 birds fledged. The peninsula was the worst area in the state followed by south Gippsland with five chicks.

Best results occurred in the far west region with 25 chicks surviving to fledge. Phillip Island had 12. All other zones had single figures. There are fewer than 600 hooded plovers left in Victoria. In February, Nepean MP Martin Dixon called on the state government to introduce a total ban on dogs in Mornington Peninsula National Park but the Labor state government’s environment minister Lisa Neville rejected the call and accused Mr Dixon of “waging war on dog walke rs”. Mike Hast