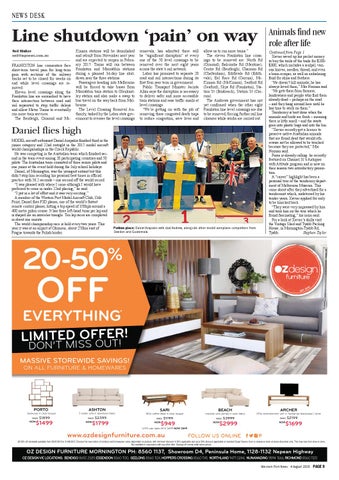 Continued from Page 1 Xavier saved up his pocket money to buy the tools of the trade for $200$300, which includes a scalpel, various knives, needles, thread, and even a brain scraper, as well as embalming fluid for skins and feathers. â&#x20AC;&#x153;He doesnâ&#x20AC;&#x2122;t kill animals; he has always loved them,â&#x20AC;? Mrs Noonan said â&#x20AC;&#x153;He gets them from farmers, landowners and people who find them already dead â&#x20AC;&#x201C; perhaps on the road â&#x20AC;&#x201C; and they hang around here until he has time to work on them.â&#x20AC;? Taxidermy is best done when the animals and birds are fresh â&#x20AC;&#x201C; meaning there is little smell â&#x20AC;&#x201C; and the waste goes into plastic bags and into the bin. â&#x20AC;&#x153;Xavier recently got a licence to preserve native Australian animals that are found dead that would otherwise not be allowed to be touched because they are protected,â&#x20AC;? Mrs Noonan said. Fame is already calling: he recently featured on Channel 31â&#x20AC;&#x2122;s Antiques with Attitude program and is now on their season two introductory promotion. A â&#x20AC;&#x153;careerâ&#x20AC;? highlight has been a personal tour of the taxidermy department of Melbourne Museum. This came about after they advertised for a taxidermist which, undeterred by his tender years, Xavier applied for only to be knocked back. â&#x20AC;&#x153;They were very impressed by him and took him on the tour which he found fascinating,â&#x20AC;? his mum said. For a look at Xavierâ&#x20AC;&#x2122;s skills visit the Vintage Shed and Tyabb Packing House, in Mornington-Tyabb Rd, Tyabb. Stephen Taylor

FRANKSTON line commuters face short-term travel pain for long-term gain with sections of the railway tracks set to be closed for weeks on end while level crossings are removed. Eleven level crossings along the Frankston line are earmarked to have their intersection between road and rail separated to stop traffic delays and allow Metro Trains to eventually run more train services. The Bentleigh, Ormond and Mc-

Kinnon stations will be demolished and rebuilt from November next year and are expected to reopen in February 2017. Trains will run between Frankston and Moorabbin stations during a planned 34-day line shutdown near the three stations. Passengers heading into Melbourne will be forced to take buses from Moorabbin train station to Glenhuntley station and also make a swap to bus travel on the way back from Melbourne. The Level Crossing Removal Authority, tasked by the Labor state government to oversee the level crossings

removals, has admitted there will be â&#x20AC;&#x153;significant disruptionâ&#x20AC;? at every one of the 50 level crossings to be removed over the next eight years across the stateâ&#x20AC;&#x2122;s rail network. Labor has promised to separate 20 road and rail intersections during its first four-year term in government. Public Transport Minister Jacinta Allan says the disruption is necessary to deliver safer and more accessible train stations and ease traffic snarls at level crossings. â&#x20AC;&#x153;Weâ&#x20AC;&#x2122;re getting on with the job of removing these congested death traps to reduce congestion, save lives and

Daniel flies high MODEL aircraft enthusiast Daniel Arapakis finished third in the junior category and 22nd outright in the 2015 model aircraft world championships in the Czech Republic. He was competing in the Australian team which finished second in the team event among 20 participating countries and 50 pilots. The Australian team consisted of three senior pilots and one junior at the event held during the July school holidays. Daniel, of Mornington, was the youngest entrant but this didnâ&#x20AC;&#x2122;t stop him recording his personal best times in official practice with 56.2 seconds â&#x20AC;&#x201C; one second off the world record. â&#x20AC;&#x153;I was pleased with where I came although I would have preferred to come in under 22nd placing,â&#x20AC;? he said. â&#x20AC;&#x153;I put in a lot of effort and it was very exciting.â&#x20AC;? A member of the Western Port Model Aircraft Club, Crib Point, Daniel flies F3D planes, one of the worldâ&#x20AC;&#x2122;s fastest remote control planes, hitting a top speed of 350kph around a 400 metre pylon course. It has three left-hand turns per lap and is shaped ike an isosceles triangle. Ten lap races are completed in about one minute. The world championship race is held every two years. This year it was at an airport at Olomouc, about 250km east of Prague towards the Polish border.

Podium place: Daniel Arapakis with dad Andrew, alongside other model aeroplane competitors from Sweden and Guatemala.