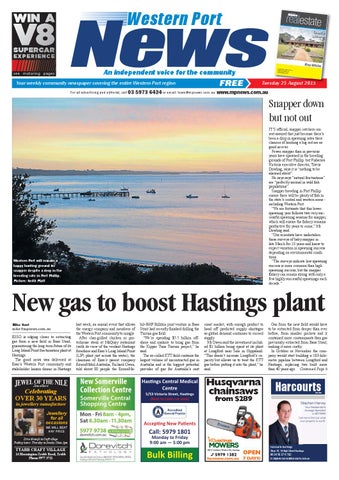 Snapper down but not out IT’S official, snapper catchers can rest assured that just because there’s been a drop in spawning rates there chances of hooking a big red are as good as ever. Fewer snapper than in previous years have spawned in the breeding grounds of Port Phillip but Fisheries Victoria executive director, Travis Dowling, says it is “nothing to be alarmed about”. He says says “natural fluctuations” are “perfectly normal in wild fish populations”. Snapper breeding in Port Phillip ensure there will be plenty of fish in the state’s central and western areas including Western Port. “We are fortunate that this lower spawning year follows two very successful spawning seasons for snapper, which will ensure the fishery remains productive for years to come,” Mr Dowling said. “Our scientists have undertaken these surveys of baby snapper in late March for 23 years and know to expect variation in spawning success depending on environmental conditions. “The surveys indicate low spawning success is more common than high spawning success, but the snapper fishery can remain strong with only a few highly successful spawnings each decade.”

Western Port will remain a happy hunting ground for snapper despite a drop in the breeding rate in Port Phillip. Picture: Keith Platt

Jewellery for all occasions WE WILL BEAT ANY PRICE

last week, an annual event that allows the energy company and members of the Western Port community to mingle. After char-grilled chicken or porterhouse steak at MaQuay restaurant (with its view of the verdant Hastings foreshore and Esso’s Long Island Point (LIP) plant just across the water), the chairman of Esso’s parent company ExxonMobil Australia, Richard Owen, told about 80 people the ExxonMo-

bil–BHP Billiton joint venture in Bass Strait had recently finished drilling the Turrum gas field. “We’re spending $5.5 billion offshore and onshore to bring gas from the Kipper Tuna Turrum project,” he said. The so-called KTT field contains the largest volume of uncontracted gas in Australia and is the biggest potential provider of gas for Australia’s east

coast market, with enough product to head off predicted supply shortages as global demand continues to exceed supply. Mr Owen said the investment included $1 billion being spent at its plant at Longford near Sale in Gippsland. “This doesn’t increase Longford’s capacity but allows us to treat the KTT gas before putting it into the plant,” he said.

Gas from the new field would have to be extracted from deeper than ever before, from smaller pockets and it contained more contaminants than gas previously extracted from Bass Strait, making it more costly. In October or November the company would start building a 183-kilometre pipeline between Longford and Hastings, replacing two built more than 40 years ago. Continued Page 6