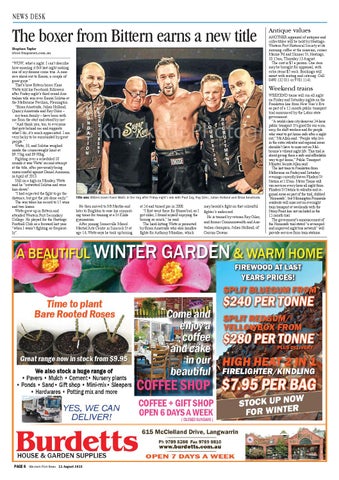 The boxer from Bittern earns a new title Stephen Taylor steve@mpnews.com.au “WOW, what a night. I can&#39;t describe how amazing it felt last night making one of my dreams come true. A massive shout out to Emosi, a couple of great guys.” That’s how Bittern boxer Kane Watts told his Facebook followers after Friday night’s third round Australian title win over Emosi Solitua at the Melbourne Pavilion, Flemington. “Brian Amatruda, Julian Holland, Quincy Amatruda and Ray Giles – my team family – have been with me from the start and stood by me! “And thank you, too, to everyone that gets behind me and supports what I do; it’s much appreciated. I am very lucky to be surrounded by great people.” Watts, 33, and Solitua weighed inside the cruiserweight limit at 89.75kg and 89.90kg. Fighting over a scheduled 10 rounds it was Watts’ second attempt at the title, after previously being unsuccessful against Daniel Ammann, in April of 2013. Still on a high on Monday, Watts said he “outwitted Solitua and wore him down”. “I had expected the fight to go the distance, but got the job done early.” The win takes his record to 15 wins and two losses. Watts grew up in Bittern and attended Western Port Secondary College. He played for the Hastings Football Club as a forward last year “when I wasn’t fighting so frequently”.

Antique values ANOTHER appraisal of antiques and collectibles will be held by HastingsWestern Port Historical Society at its morning coffee at the museum, corner Marine Pd and Skinner St, Hastings, 10.15am, Thursday 13 August. The cost is $5 a person. One item may be brought for appraisal, with extra items $5 each. Bookings will assist with seating and catering. Call 0490 132 011 or 9781 1141.

He then moved to Mt Martha and later to Brighton to ease his commuting times for training at a St Kilda gymnasium. After joining Somerville Mixed Martial Arts Centre in Simcock St at age 14, Watts says he took up boxing

at 24 and turned pro in 2008. “I first went there for fitness but, as I got older, I found myself enjoying the boxing so much,” he said. The hard-hitting Watts is promoted by Brian Amatruda who also handles fights for Anthony Mundine, which

may herald a fight on that colourful fighter’s undercard. He is trained by veteran Ray Giles, and former Commonwealth and Australian champion, Julian Holland, of Carrum Downs.

WEEKEND trains will run all night on Friday and Saturday nights on the Frankston line from New Year’s Eve as part of a 12-month public transport trial announced by the Labor state government. “A world-class city deserves 24-hour public transport. It’s good for our economy, for shift workers and for people who want to get home safe after a night out,” Ms Allan said. “People who live in the outer suburbs and regional areas shouldn’t have to miss out on Melbourne’s vibrant night life. This trial is about giving them a safe and affordable way to get home,” Public Transport Minister Jacinta Allan said. The last train to Frankston from Melbourne on Friday and Saturday evenings currently leaves Flinders St Station at 1.05am. Metro Trains will run services every hour all night from Flinders St Station to suburbs and regional areas as part of the trial, dubbed ‘Homesafe’, but Mornington Peninsula residents will miss out on overnight train transport at weekends with the Stony Point line not included in the 12-month trial. The government’s announcement of the Homesafe trial stated “a revamped and improved night bus network” will provide services from train stations.