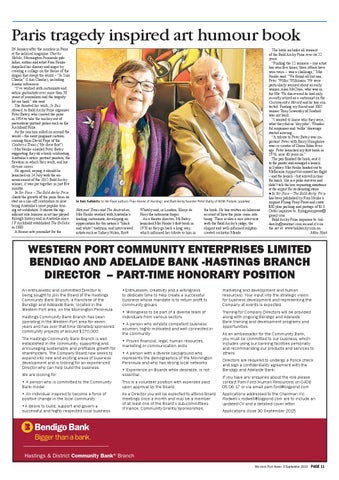 Paris tragedy inspired art humour book IN January after the murders in Paris at the satirical magazine Charlie Hebdo, Mornington Peninsula publisher, author and artist Fran Henke dispelled her dismay and anger by creating a collage on the theme of the slogan that swept the world – “Je Suis Charlie” (I Am Charlie), including Aussie references. “I’ve worked with cartoonists and satiric portraitists over more than 50 years of journalism and the tragedy hit me hard,” she said. She donated her work, Je Suis Ahmed, to Bald Archy Prize organiser Peter Batey, who created the prize in 1994 to take the mickey out of pretentious portrait prizes such as the Archibald Prize. As the reaction rolled on around the world – the most poignant cartoon coming from David Pope of the Canberra Times (“He drew first”) – Mrs Henke emailed Peter Batey suggesting they do a book celebrating Australia’s satiric portrait painters, the freedom in which they work, and his diverse career. He agreed, saying it should be launched on 24 July with the announcement of the 2015 Bald Archy winner; it was put together in just five months. In Yer Face – The Bald Archy Prize charts the growth of the prize from its start as a one-off celebration to now being Australia’s most popular touring art exhibition. It shows the significant role humour in art has played through history and in Australia since J F Archibald established The Bulletin in 1880. A former arts journalist for the

National Times and The Australian, Mrs Henke worked with Australia’s leading cartoonists, developing an appreciation for the nation’s “black and white” tradition, and interviewed artists such as Sidney Nolan, Brett

Whitely and, in London, Elmyr de Hory the notorious forger. As a theatre director, Mr Batey launched Mrs Henke’s first book in 1976 so they go back a long way, which informed her tribute to him in

the book. He has written an hilarious account of how the prize came into being. There is also a rare interview with the Bald Archy’s judge, the elegant and well-informed sulphurcrested cockatoo Maude.

The book includes all winners of the Bald Archy Prize over its 22 years. “Finding the 12 winners – one artist has won five times, three others have won twice – was a challenge,” Mrs Henke said. “We found all but one, Peter ‘Wilko’ Wilkinson. We were particularly worried about an early winner, Alan McClure, who was in his 90s. We discovered he had only recently retired as a cartoonist on the Cootamundra Herald and he has contacted. Finding my friend and 2005 winner Tony Sowersby of Seaford was not hard. “I wanted to know who they were, what they did as ‘day jobs’. Wonderful responses and ‘selfie’ drawings started arriving. “A tribute to Peter Batey was important. Peter with Barry Humphries was co-creator of Dame Edna Everage. Peter launched my first book in 1976, now 40 years on.” The pair finished the book, sent it to the printer and arranged a launch in Sydney. Mrs Henke headed out to Melbourne Airport but missed her flight – and the launch – but arrived in time for lunch. She is a polio survivor and didn’t tick the box requesting assistance at the airport for its daunting stairs.  In Yer Face – The Bald Archy Prize has been published by Fran Henke’s imprint Flying Pony Press and costs $30 plus packing and postage of $13. Order inquiries to: flyingponypress@ gmail.com Bald Archy Prize inquiries to: baldarchy@westnet.com.au and it’s on the net at: www.baldarchy.com.au Mike Hast

WESTERN PORT COMMUNITY ENTERPRISES LIMITED BENDIGO AND ADELAIDE BANK -HASTINGS BRANCH DIRECTOR – PART-TIME HONORARY POSITION An enthusiastic and committed Director is being sought to join the Board of the Hastings Community Bank Branch, a franchise of the Bendigo and Adelaide Bank, located in the Western Port area, on the Mornington Peninsula. Hastings Community Bank Branch has been operating in the Western Port area for seven years and has over that time donated/sponsored community projects of around $270,000. The Hastings Community Bank Branch is well established in the community, supporting and encouraging sustainable and proÀtable growth for shareholders. The Company Board now seeks to expand into new and exciting areas of business development and is looking for an experienced Director who can help build the business.

•Enthusiasm, creativity and a willingness to dedicate time to help create a successful business whose mandate is to return proÀt to community groups

Training for Company Directors will be provided along with ongoing Bendigo and Adelaide Bank training and development programs and opportunities.

• A person who exhibits competent business acumen, highly motivated and well connected in the community • Proven Ànancial, legal, human resources, marketing or communication skills • A person with a diverse background who represents the demographics of the Mornington Peninsula and who has strong local networks

We are looking for:

• Experience on Boards while desirable, is not essential.

• A person who is committed to the Community Bank model

This is a volunteer position with expenses paid upon approval by the Board.

As a Director you will be expected to attend Board meetings once a month and may be a member of at least one of the Board’s sub-committees (Finance, Community Grants/sponsorships,

•A desire to build, support and govern a successful and highly respected local business

As an ambassador for the Community Bank, you must be committed to our business, which includes using our banking facilities personally and recommending our products and services to others. Directors are required to undergo a Police check and sign a conÀdentiality agreement with the Bendigo and Adelaide Bank. If you have any enquiries about the role please contact Pam Ford (Human Resources) on 0408 05 06 17 or via email pam.ford@bigpond.com Applications addressed to the Chairman Vic Rodwell v.rodwell@bigpond.com are to include an updated CV and a detailed cover letter. Applications close 30 September 2015