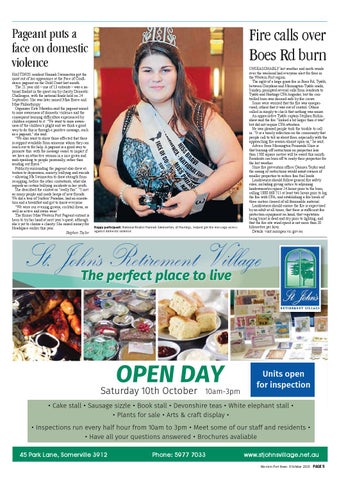 Pageant puts a face on domestic violence HASTINGS resident Hannah Swinnerton got the most out of her appearance at the Face of Confidence pageant on the Gold Coast last month. The 21 year old – one of 13 entrants – was a national finalist in the quest run by charity Domestic Challenges, with the national finals held on 24 September. She was later named Miss Brave and Miss Philanthropy. Organiser Kate Marsden said the pageant aimed to raise awareness of domestic violence and the consequent learning difficulties experienced by children exposed to it. “We want to raise awareness of the children’s plight and we think a good way to do this is through a positive message, such as a pageant,” she said. “We also want to show those affected that there is support available from someone whom they can reach out to for help. A pageant is a good way to promote this: with the message easier to impart if we have an attractive woman in a nice gown and sash speaking to people personally, rather than sending out flyers.” Publicity surrounding the pageant also drew attention to depression, anxiety, bullying and suicide – allowing Ms Swinnerton to draw strength from recapping, before the other contestants, what she regards as certain bullying incidents in her youth. She described the contest as “really fun”. “I met so many people and made heaps of new friends. We did a tour of Surfers’ Paradise, had an orientation and a breakfast and got to know everyone. “We wore our evening gowns, cocktail dress, as well as active and swim wear.” The former Miss Western Port Pageant entrant is keen to try her hand at next year’s quest, although she’s yet to choose a charity. She raised money for Headspace earlier this year. Stephen Taylor

Happy participant: National finalist Hannah Swinnerton, of Hastings, helped get the message across against domestic violence.

UNSEASONABLY hot weather and north winds over the weekend had everyone alert for fires in the Western Port region. The sight of a large grass fire in Boes Rd, Tyabb, between Graydens and Mornington-Tyabb roads, Sunday, prompted several calls from residents to Tyabb and Hastings CFA brigades, but the controlled burn was deemed safe by fire crews. Some were worried that the fire was unsupervised; others that it was out of control. Others called in simply to check that nothing was amiss. An appreciative Tyabb captain Stephen Birkinshaw said the fire “looked a bit larger than it was” but did not require CFA attention. He was pleased people took the trouble to call in. “It is a timely reflection on the community that people call to tell us about fires, especially with the approaching fire season almost upon us,” he said. Advice from Mornington Peninsula Shire is that burning-off restrictions on properties less than 1500 square metres will be eased this month. Residents can burn off to ready their properties for the hot weather. Shire fire prevention officer Damien Taylor said the easing of restrictions would assist owners of smaller properties to reduce fine fuel loads. Landowners should follow general fire safety rules, including giving notice to adjoining landowners/occupiers 24 hours prior to the burn, calling 1800 668 511 at least two hours prior to log the fire with CFA, and establishing a fire break of three metres cleared of all flammable material. Landowners should ensure the fire is supervised by an adult at all times, that there is sufficient fire protection equipment on hand, that vegetation being burnt is dead and dry prior to lighting, and that the fire site wind speed is not more than 20 kilometres per hour. Details: visit mornpen.vic.gov.au

• Cake stall • Sausage sizzle • Book stall • Devonshire teas • White elephant stall • • Plants for sale • Arts & craft display • • Inspections run every half hour from 10am to 3pm • Meet some of our staff and residents • • Have all your questions answered • Brochures avaliable 45 Park Lane, Somerville 3912