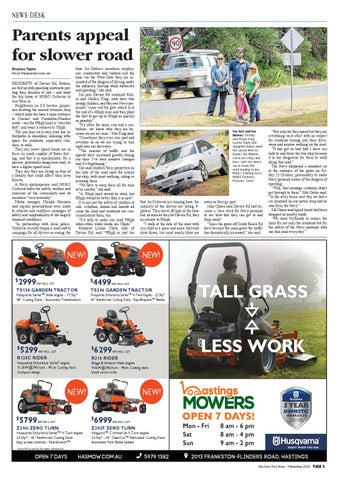 Parents appeal for slower road Stephen Taylor steve@mpnews.com.au RESIDENTS of Davies Rd, Bittern, are fed up with speeding motorists putting their families at risk – and want the top brass at HMAS Cerberus to rein them in. Neighbours on 0.8 hectare properties abutting the narrow bitumen strip – which links the base’s main entrance to Coolart and Frankston-Flinders roads – say the 90kph limit is “way too fast”, and want it reduced to 70kph. The one-lane-each-way road has no footpaths or shoulders, allowing little space for residents, especially children, to walk. They say lower speed limits are in force on roads capable of faster driving, and that it is anachronistic for a narrow, potentially dangerous road, to have a higher speed limit. They say they are living in fear of a fatality that could affect their lives forever. A Navy spokesperson said HMAS Cerberus takes the safety, welfare and concerns of the community and its members “very seriously”. Media manager Claudia Harrison said regular presentations were made to educate and reinforce messages of safety and responsibility to the largely transient workforce. “In partnership with local police, Cerberus recently began a road safety campaign for all drivers accessing the

base. As Defence members, employees, contractors and visitors exit the base via the West Gate they are reminded of the dangers of driving under the influence, driving while distracted and speeding,” she said. Six-year Davies Rd residents Robin and Shelley King, who have two young children, say they see Navy personnel “come out the gate which is at the end of a 40kph zone and then plant the foot to get up to 90kph as quickly as possible”. “It’s often the same cars and a motorbike; we know who they are because we are so close,” Mrs King said. “Sometimes they even roar past and overtake us as we are trying to turn right into our driveway. “The amount of traffic and the speeds have increased greatly during our time. I’ve seen massive changes and it’s frightening.” She said children from properties on her side of the road used the school bus stop, with most walking, riding or scooting there. “We have to warn them all the time to be careful,” she said. “A 70kph limit would be ideal, but 80kph would be better than it is now”. It is not just the safety of children at risk: echidnas, koalas and lizards all cross the road and residents are concerned about them, too. “It’s silly to make our road 90kph when other, wider roads, are 70kph.” Resident Leonie Clark, also of Davies Rd, said “90kph is just too

fast. As Cerberus is a training base, the majority of the drivers are young Pplaters. They travel 40 kph on the base but, as soon as they hit Davies Rd, they accelerate to 90kph. “I walk at the side of the road with my child in a pram and some [drivers] slow down, but most nearly blow me

away as they go past. Julia Oakes said Davies Rd had become a “race track for Navy personal to see how fast they can get to and from work”. “Since the gates off South Beach Rd have become the main gates the traffic has dramatically increased,” she said.

“Not only do they speed but they are overtaking each other with no respect for residents turning into their driveways and anyone walking on the road. “It has got so bad that l drive my kids to and from the bus stop because it is too dangerous for them to walk along this road.” The Navy displayed a smashed car at the entrance of the gates on Friday 23 October, presumably to make Navy personal aware of the dangers of speeding. “Well, that message certainly didn't get through to them,” Mrs Oakes said. “In the early hours next day we had a car smashed on our nature strip and he was from the Navy.” Ms Oakes said speed limits had been dropped on nearby roads. “We want VicRoads to reduce the limit for not only the residents but for the safety of the Navy personal who use this road every day.”

Too fast and too furious: Shelley and Robin King, Leonie Clark and daughter Gwen, want the speed limit on Davies Rd, Bittern, cut to possibly save lives. Left: the latest car to leave the road leading to the Navy’s training base, HMAS Cerberus. Pictures: Yanni

*Gross HP as rated by the engine manufacturer.