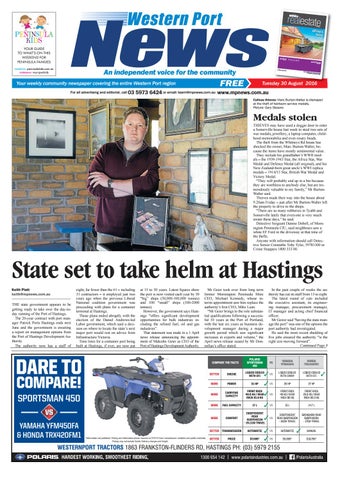 Medals stolen THIEVES may have used a doggie door to enter a Somerville house last week to steal two sets of war medals, jewellery, a laptop computer, childhood memorabilia and even rosary beads. The theft from the Whitneys Rd house has shocked the owner, Marc Burton-Walter, because the items have mostly sentimental value. They include his grandfather’s WWII medals – the 1939-1945 Star, the Africa Star, War Medal and Defence Medal (all original), and his New Zealand-born great uncle’s WWI replica medals – 1914/15 Star, British War Medal and Victory Medal. “They will probably end up in a bin because they are worthless to anybody else, but are tremendously valuable to my family,” Mr BurtonWalter said. Thieves made their way into the house about 9.20am Friday – just after Mr Burton-Walter left the property to drive to the shops. “There are so many robberies in Tyabb and Somerville lately that everyone is very much aware these days,” he said. Detective Sergeant Dannie Dobell, of Mornington Peninsula CIU, said neighbours saw a white EF Ford in the driveway at that time of the thefts. Anyone with information should call Detective Senior Constable Toby Tyler, 59781300 or Crime Stoppers 1800 333 00.

State set to take helm at Hastings Keith Platt keith@mpnews.com.au THE state government appears to be getting ready to take over the day-today running of the Port of Hastings. The 20-year contract with port manager Patrick Ports Hastings ends next June and the government is awaiting a report on management options from the Port of Hastings Development Authority. The authority now has a staff of

eight, far fewer than the 61 – including 31 contractors – it employed just two years ago when the previous Liberal National coalition government was proceeding with plans for a container terminal at Hastings. Those plans ended abruptly with the election of the Daniel Andrews-led Labor government, which said a decision on where to locate the state’s next major port would rest on advice from Infrastructure Victoria. Time lines for a container port being built at Hastings, if ever, are now put

at 15 to 30 years. Latest figures show the port is now visited each year by 50 “big” ships (50,000-100,000 tonnes) and 100 “small” ships (100-2000 tonnes). However, the government says Hastings “offers significant development opportunities for bulk industries including the refined fuel, oil and gas industries”. That statement was made in a 1 April news release announcing the appointment of Malcolm Geier as CEO of the Port of Hastings Development Authority.

BETTER TRANSMISSION *Information not published. Pricing and information shown sourced at 27/7/16 from manufacturer websites and public materials. Pricing may not include Dealer Delivery charges and freight.

In the past couple of weeks the authority has cut its staff from 13 to eight. The latest round of cuts included the executive assistant, its engineering manager, procurement manager, IT manager and acting chief financial officer. Mr Geirer said “having the state manage the port” was one of the options the port authority had investigated. He said the most recent shedding of five jobs ensured the authority “is the right size moving forward”. Continued Page 8