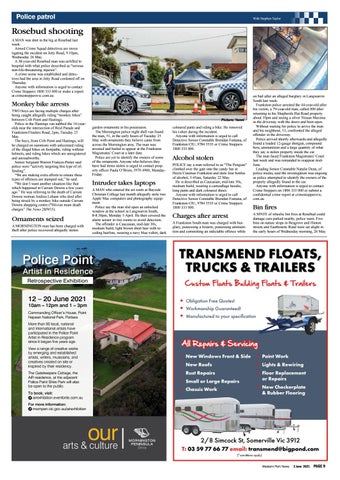 Rosebud shooting A MAN was shot in the leg at Rosebud last week. Armed Crime Squad detectives are investigating the incident on Jetty Road, 9.10pm, Wednesday 26 May. A 38-year-old Rosebud man was airlifted to hospital with what police described as “serious non-life-threatening injuries”. A crime scene was established and detectives had the area in Jetty Road cordoned off on Thursday. Anyone with information is urged to contact Crime Stoppers 1800 333 000 or make a report at crimestoppersvic.com.au

Monkey bike arrests TWO boys are facing multiple charges after being caught allegedly riding “monkey bikes” between Crib Point and Hastings. Police in the Hastings van nabbed the 14-yearolds near the intersection of Reid Parade and Frankston-Flinders Road, 2pm, Tuesday 25 May. The boys, from Crib Point and Hastings, will be charged on summons with unlicensed riding of the illegal bikes on footpaths; riding without helmets, and riding bikes which are unregistered and unroadworthy. Senior Sergeant Warren Frances-Pester said police were “actively targeting this type of offending”. “We are making extra efforts to ensure these types of offences are stamped out,” he said. “We don’t want another situation like that which happened in Carrum Downs a few years ago.” He was referring to the death of Carrum Downs woman Andrea Lehane who died after being struck by a monkey bike outside Carrum Downs shopping centre (“Hit-run mum death charges” The News 28/9/15).

Picture: Yanni garden ornaments in his possession. The Mornington police night shift van found the man, 51, in the early hours of Tuesday 25 May with ornaments they believe came from across the Mornington area. The man was arrested and bailed to appear at the Frankston Magistrates’ Court at a later date. Police are yet to identify the owners of some of the ornaments. Anyone who believes they have had items stolen is urged to contact property officer Paula O’Brien, 5970 4900, MondayFriday.

coloured pants and riding a bike. He removed his t-shirt during the incident. Anyone with information is urged to call Detective Senior Constable Brendan Fontana, of Frankston CIU, 9784 5535 or Crime Stoppers 1800 333 000.

Alcohol stolen POLICE say a man referred to as “The Penguin” climbed over the gate into the candy bar at Hoyts Cinemas Frankston and stole four bottles of alcohol, 5.45am, Saturday 22 May. He is described as Caucasian, mid-late 30s, medium build, wearing a camouflage hoodie, long pants and dark coloured shoes. Anyone with information is urged to call Detective Senior Constable Brendan Fontana, of Frankston CIU, 9784 5535 or Crime Stoppers 1800 333 000.

Charges after arrest A Frankston South man was charged with burglary, possessing a firearm, possessing ammunition and committing an indictable offence while

on bail after an alleged burglary in Langwarrin South last week. Frankston police arrested the 44-year-old after his victim, a 79-year-old man, called 000 after returning to his Shepherds Hut Road property about 10pm and seeing a silver Nissan Maxima in the driveway with the doors and boot open. Without waiting for police to arrive the man and his neighbour, 53, confronted the alleged offender in the driveway. Police arrived shortly afterwards and allegedly found a loaded 12-gauge shotgun, compound bow, ammunition and a large quantity of what they say is stolen property inside the car. The man faced Frankston Magistrates’ Court last week and was remanded to reappear midJune. Leading Senior Constable Natalie Dean, of police media, said the investigation was ongoing as police attempted to identify the owners of the property allegedly found in the car. Anyone with information is urged to contact Crime Stoppers on 1800 333 000 or submit a confidential crime report at crimestoppersvic. com.au

Bin fires A SPATE of wheelie bin fires at Rosebud could damage cars parked nearby, police warn. Five bins on nature strips in Besgrove and Hinton streets and Eastbourne Road were set alight in the early hours of Wednesday morning, 26 May.

10am – 12pm and 1 – 3pm Commanding Officer’s House, Point Nepean National Park, Portsea More than 90 local, national and international artists have participated in the Police Point Artist in Residence program since it began five years ago. View a range of creative works by emerging and established artists, writers, musicians, and creatives created on site or inspired by their residency. The Gatekeepers Cottage, the AiR residence, at the adjacent Police Point Shire Park will also be open to the public. To book, visit: airexhibition.eventbrite.com.au