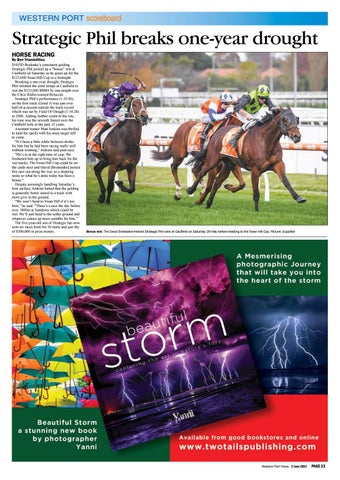 By Ben Triandafillou DAVID Bridoake’s consistent gelding Strategic Phil picked up a “bonus” win at Caulfield on Saturday as he gears up for the $125,000 Swan Hill Cup in a fortnight. Breaking a one-year drought, Strategic Phil relished the solid tempo at Caulfield to win the $125,000 BM84 by one-length over the Chris Waller-trained Relucent. Strategic Phil’s performance (1:35.00) on the firm track (Good 3) was just over half-of-a-second outside the track record which was set by Field Of Omagh (1:34.28) in 2006. Adding further credit to the run, his time was the seventh fastest over the Caulfield mile in the past 15 years. Assistant trainer Matt Jenkins was thrilled to land the spoils with his main target still to come. “It’s been a little while between drinks for him but he had been racing really well without winning,” Jenkins said post-race. “He’s in at the right time of year. We freshened him up to bring him back for the wet tracks. The Swan Hill Cup could be on the cards next and David [Brideoake] picked this race out along the way as a stepping stone so what he’s done today has been a bonus.” Despite seemingly handling Saturday’s firm surface, Jenkins hinted that the gelding is generally better suited to a track with more give in the ground. “We won’t head to Swan Hill if it’s too firm,” he said. “There’s a race the day before over 1800m at Sandown which could be wet. We’ll just head to the softer ground and whatever comes up more suitable for him.” The five-year-old son of Strategic has now won six races from his 30 starts and just shy of $300,000 in prize money.

Bonus win: The David Brideoake-trained Strategic Phil wins at Caulfield on Saturday 29 May before heading to the Swan Hill Cup. Picture: Supplied