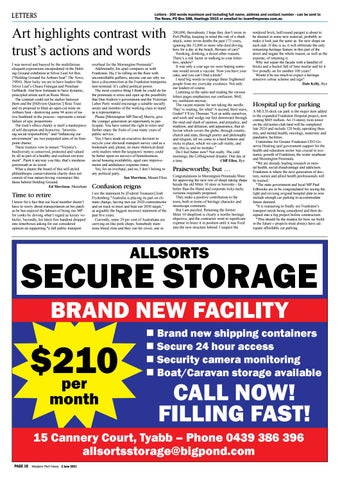 Art highlights contrast with trust’s actions and words I was moved and buoyed by the multifarious eloquent expressions encapsulated in the Holding Ground exhibition at Silver Leaf Art Box (“Holding Ground for Arthurs Seat” The News, 19/04). How lucky we are to have leaders like Silver Leaf’s Chiara Finnigan and Penelope Gebhardt. And how fortunate to have dynamic, principled artists such as Rosie Weiss. The contrast could not be starker between them and the [Hillview Quarries’] Ross Trust and its proposal to blast an open-cut mine on Arthurs Seat - destroying some 94 acres of native bushland in the process - represents a moral failure of epic proportions. The trust’s ethics charter is itself a masterpiece of self-deception and hypocrisy. “prioritising social responsibility” and “enhancing our environment” are two purported aims of its fourpoint charter. These trustees vow to ensure “Victoria’s biodiversity is conserved, protected and valued by all as part of a healthy and resilient environment”. Paint it anyway you like, that’s insidious greenwash at its worst. What a shame the board of this self-styled philanthropic conservationist charity does not consist of true nature-loving visionaries like those behind Holding Ground. Ed Merrison, Shoreham

Time to retire I know for a fact that our local member doesn’t have to worry about transportation on his patch as he has enjoyed the labours of being our MP for yonks by driving what I regard as luxury vehicles. Secondly, his latest free handout dropped into letterboxes asking for our considered opinion on supporting “a full public transport

overhaul for the Mornington Peninsula”. Additionally, his spiel compares us with Frankston. Ha, I’m rolling on the floor with uncontrollable guffaws, anyone can see why we have a disconnection at the Frankston transportation terminal. It’s called political power. The most creative thing I think he could do for the peninsula is retire and open up the possibility that Dan Andrew’s government and the Victorian Labor Party would encourage a suitable socially aware and member of the working class to stand as a representative. Please [Mornington MP David] Morris, give the younger generation an opportunity to participate. You have earned the right to retire and further enjoy the fruits of your many years of public service. Yes, I have made an executive decision to recycle your electoral transport survey card as a bookmark and, please, no more rhetorical dead certs mailers when the taxpayers’ money could be better spent on surveys of homelessness, social housing availability, aged care improvements and ambulance response times. Yes, for an overhaul, and no, I don’t belong to any political party. Ian Morrison, Mount Eliza

Confusion reigns I see the statement by [Federal Treasurer] Josh Frydenberg “Australia is playing its part on climate change, having met our 2020 commitments and on track to meet and beat our 2030 target,” as arguably the biggest incorrect statement of the past five years. Currently, some 29 per cent of Australians are carrying on like pork chops. Somebody mentions blood clots and they run for cover; one in

200,000, thereabouts. I hope they don’t swim in Port Phillip, keeping in mind the risk of a shark attack, some seven deaths the past 175 years, ignoring the 35,000 or more who died driving here for a day at the beach. Beware of cars? Smoking, drinking, a dozen other reasons. There’s a risk factor in walking to your letterbox; spiders? It was only a year ago we were hoping someone would invent a vaccine. Now you have your cake, and you can’t find a knife? I need big words to expunge these frightened people from my everyday existence. Not only our leaders of course. Listening to the radio and reading the various letters pages emphasises our confusion. Well, my confusion anyway. The vacant reasons for not taking the needle. They’re waiting, for what? A second, third wave, Godot? I’ll try Thoreau: “Let us settle ourselves, and work and wedge our feet downward through the mud and slush of opinion, and prejudice, and tradition, and delusion, and appearance, that alluvion which covers the globe, through country, church and state, through poetry and philosophy and religion, till we come to a hard bottom and rocks in place, which we can call reality, and say, this is, and no mistake.” Do I feel better now? Not really. The cold mornings, the Collingwood disaster. One day at a time. Cliff Ellen, Rye

Praiseworthy, but … Congratulations to Mornington Peninsula Shire for approving the new row of shops taking shape beside the old Mitre 10 store in Sorrento - far better than the bland and corporate ticky-tacky versions originally proposed. They make a positive contribution to the town, both in terms of heritage character and streetscape continuity. But I am puzzled. Retaining the former Mitre 10 shopfront is clearly a worthy heritage objective, and the contractor went to significant expense to brace it in position until it was fixed into the new structure behind. I suspect the

rendered brick, half-round parapet is about to be sheeted in some new material, probably to make it look just the same as the new shops on each side. If this is so, it will obliterate the only remaining heritage feature in this part of the street and negate the whole reason, as well as the expense, of retaining it. Why not repair the facade with a handful of bricks and a bucket full of lime mortar and let it live proudly on for another 100 years? Would it be too much to expect a heritage sensitive colour scheme and sign? Dale Kelly, Rye

Hospital up for parking A MULTI-deck car park is the major item added to the expanded Frankston Hospital project, now costing $605 million. An 11-storey twin tower on the old tennis club land will be completed late 2024 and include 120 beds, operating theatres, and mental health, oncology, maternity and paediatric facilities. Committee for Greater Frankston CEO Ginevra Hosking said government support for the health and education sector was crucial to economic growth of Frankston, the wider southeast and Mornington Peninsula. “We are already leading research in mental health, social disadvantage and addiction. Frankston is where the next generation of doctors, nurses and allied health professionals will be trained. “The state government and local MP Paul Edbrooke are to be congratulated for seeing the light and revising original hospital plan to now include enough car parking to accommodate future demand. “It is reassuring to finally see Frankston’s transport needs being considered and then designed into a big project before construction. “This should be the mantra for how we build in the future – projects must always have adequate affordable car parking.