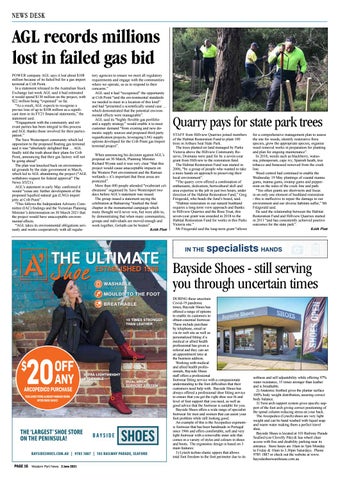 AGL records millions lost in failed gas bid POWER company AGL says it lost about $108 million because of its failed bid for a gas import terminal at Crib Point. In a statement released to the Australian Stock Exchange last week AGL said it had estimated it would spend $130 million on the project, with $22 million being “expensed” so far. “As a result, AGL expects to recognise a pre-tax loss of up to $108 million as a significant item in its FY21 financial statements,” the statement said. “Engagement with the community and relevant parties has been integral to this process and AGL thanks those involved for their participation.” The Save Westernport community which led opposition to the proposed floating gas terminal said it was “absolutely delighted that … AGL finally told the truth about their plans for Crib Point, announcing that their gas factory will not be going ahead”. The plan was knocked back on environmental grounds by the state government in March, which led to AGL abandoning the project (“AGL withdraws request for federal approval” The News 3/5/21). AGL’s statement in early May confirmed it would “cease any further development of the proposed liquified natural gas (LNG) import jetty at Crib Point”. “This follows the Independent Advisory Committee (IAC) findings and the Victorian Planning Minister’s determination on 30 March 2021 that the project would have unacceptable environmental effects. “AGL takes its environmental obligations seriously and works cooperatively with all regula-

tory agencies to ensure we meet all regulatory requirements and engage with the communities where we operate, so as to respond to their concerns.” AGL said it had “recognised” the opportunity at Crib Point “and the environmental standards we needed to meet in a location of this kind” and had “presented a scientifically sound case … which demonstrated that the potential environmental effects were manageable”. AGL said its “highly flexible gas portfolio and a supply strategy” would enable it to meet customer demand “from existing and new domestic supply sources and proposed third party regasification projects, leveraging LNG supply options developed for the Crib Point gas Import terminal project”. When announcing his decision against AGL’s proposal on 30 March, Planning Minister Richard Wynne said it was very clear “that this project would cause unacceptable impacts on the Western Port environment and the Ramsar wetlands – it’s important that these areas are protected”. More than 400 people attended “exuberant celebrations” organised by Save Westernport two days before AGL’s statement was issued. The group issued a statement saying the celebration at Balnarring “marked the final chapter in the monumental campaign which many thought we'd never win, but were able to, by demonstrating that when many communities, groups and individuals are moved enough and work together, Goliath can be beaten”. Keith Platt

WASHABLE MOULDS TO THE FOOT BREATHABLE 15 TIMES STRONGER THAN LEATHER

THE ‘LARGEST’ SHOE STORE ON THE PENINSULA!

for a comprehensive management plan to assess the site for weeds, identify restorative flora species, grow the appropriate species, organise weed removal works in preparation for planting and plan for ongoing maintenance”. In 2018, weeds such as blackberry, watsonia, pittosporum, cape ivy, Spanish heath, tree tobacco and boneseed removed from the creek line. Weed control had continued to enable the Wednesday 19 May plantings of coastal manna gums, manna gums, swamp gums and peppermint on the sides of the creek line and path. “Too often grants are short-term and focus in on only one element of bushland restoration - this is ineffective to repair the damage to our environment and our diverse habitats suffer,” Mr Fitzgerald said. He said the relationship between the Habitat Restoration Fund and Hillview Quarries started in 2011 “and has consistently achieved positive outcomes for the state park”. Keith Platt

Bayside Shoes - still serving you through uncertain times DURING these uncertain Covid-19 pandemic times, Bayside Shoes has offered a range of options to enable its customers to obtain essential footwear. These include purchase by telephone, email or via its web site as well as personalized fitting if a medical or allied health professional has given a referral and they can set an appointment time at the business address. Working with medical and allied health professionals, Bayside Shoes staff offers a professional footwear fitting service with a compassionate understanding to the foot difficulties that their customers need help with. Bayside Shoes has always offered a professional shoe fitting service to ensure that you get the right shoe size fit and level of foot support that you need, as well as good advice that the footwear is suitable for you. Bayside Shoes offers a wide range of specialist footwear for men and women that can assist your foot problem while still looking good. An example of this is the Arcopedico ergonomic footwear that has been handmade in Portugal since 1966 and offers comfortable, soft and very light footwear with a removable inner sole that comes in a variety of styles and colours in shoes and boots. The ergonomic design is based on 3 main features: 1) Lytech techno elastic uppers that allows total foot freedom to the foot perimeter due to its

softness and self adjustability while offering 97% water resistance, 15 times stronger than leather and is breathable. 2) Anatomic footbed gives the plantar surface 100% body weight distribution, assuring correct body balance. 3) Twin arch support system gives specific support of the foot arch giving correct positioning of the spinal column reducing stress on your back. The Arcopedico (Lytech) shoes are very light weight and can be hand washed with liquid soap and warm water making them a perfect travel shoe. Bayside Shoes is located at 103 Railway Parade Seaford (cnr Clovelly Pde) & has wheel chair access with free and disability parking near its entrance. Store hours are 10am to 5pm Monday to Friday & 10am to 3.30pm Saturdays. Phone 9785 1887 or check out the website at www. baysideshoewarehouse.com.au