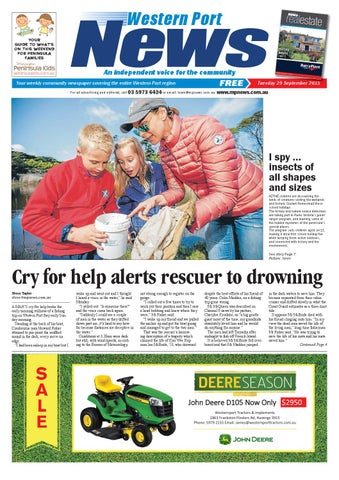 I spy … insects of all shapes and sizes ACTIVE children are discovering the kinds of creatures visiting the wetlands and historic Coolart Homestead these school holidays. The history and nature novice detectives are taking part in Parks Victoria’s junior ranger program, and learning some of the hidden mysteries of the peninsula’s special places. The program suits children aged six-12, making it ideal free school holiday fun while keeping them active outdoors, and connected with history and the environment.

Cry for help alerts rescuer to drowning Steve Taylor steve@mpnews.com.au A MAN’S cry for help broke the early morning stillness of a fishing trip on Western Port Bay early Sunday morning. Standing at the back of his boat, Cranbourne man Howard Fisher strained to pin-point the muffled sound in the dark, every nerve on edge. “I had been asleep in my boat but I

woke up and went out and I thought I heard a voice in the water,” he said Monday. “I yelled out: ‘Is someone there?’ and the voice came back again. “Suddenly I could see a couple of men in the water as they drifted down past me; it’s hard to say how far because distances are deceptive in the water.” Conditions at 3.20am were dark but still, with wind speeds, according to the Bureau of Meteorology,

not strong enough to register on the gauge. “I called out a few times to try to work out their position and then I saw a head bobbing and knew where they were,” Mr Fisher said. “I woke up my friend and we pulled the anchor up and got the boat going and managed to get to the two men.” That was the rescuer’s harrowing description of a tragedy which claimed the life of Koo Wee Rup man Ian McBride, 53, who drowned

despite the best efforts of his friend of 40 years, Colin Madden, on a fishing trip gone wrong. Mr McQueen was described on Channel 9 news by his partner, Cherylee Kerslake, as “a big gentle giant most of the time, my grandkids absolutely loved him and he would do anything for anyone.” The men had left Tooradin after midnight to fish off French Island. It is believed Mr McBride fell overboard and that Mr Madden jumped

in the dark waters to save him. They became separated from their cabin cruiser and drifted slowly in what the Coast Guard estimates as a three-knot tide. It appears Mr McBride died with his friend clinging onto him. “In my view the dead man saved the life of the living man,” long-time fisherman Mr Fisher said. “He was trying to save the life of his mate and his mate saved him.” Continued Page 4