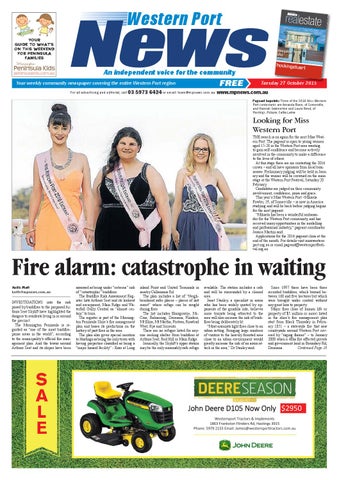 Looking for Miss Western Port THE search is on again for the next Miss Western Port. The pageant is open to young women aged 15-28 in the Western Port area wanting to gain self-confidence and become actively involved in the community to make a difference to the lives of others. At this stage there are six contesting the 2016 crown – and all have sponsors from local businesses. Preliminary judging will be held in January and the winner will be crowned on the main stage at the Western Port Festival, Saturday 20 February. Candidates are judged on their community involvement, confidence, poise and grace. This year’s Miss Western Port –Mikaela Fowler, 19, of Somerville – is now in America studying and will be back before judging begins for the next pageant. “Mikaela has been a wonderful ambassador for the Western Port community, and has received many opportunities in the modelling and professional industry,” pageant coordinator Jessica Martini said. Applications for the 2016 pageant close at the end of the month. For details visit misswesternport.org.au or email pageant@westernportfestival.org.au

Fire alarm: catastrophe in waiting Keith Platt keith@mpnews.com.au INVESTIGATIONS into the risk posed by bushfires to the proposed Arthurs Seat Skylift have highlighted the dangers to residents living in or around the precinct. The Mornington Peninsula is regarded as “one of the most bushfireprone areas in the world”, according to the municipality’s official fire management plan. And the towns around Arthurs Seat and its slopes have been

assessed as being under “extreme” risk of “catastrophic” bushfires. The Bushfire Risk Assessment Register lists Arthurs Seat and its lookout and escarpment, Main Ridge and Waterfall Gully Central as “almost certain” to burn. The register is part of the Mornington Peninsula Shire’s fire management plan and bases its predictions on the history of past fires in the area. The plan also gives special mention to Hastings as being the only town with having properties classified as being a “major hazard facility” - Esso at Long

island Point and United Terminals in nearby Callannans Rd. The plan includes a list of “Neighbourhood safer places – places of last resort” where refuge can be sought during fires. The list includes Blairgowrie, McCrae, Balnarring, Dromana, Flinders, Mt Eliza, Mt Martha, Portsea, Rosebud West, Rye and Sorrento. There are no refuges listed for anyone seeking shelter from bushfires at Arthurs Seat, Red Hill or Main Ridge. Ironically, the Skylift’s upper station may be the only reasonably safe refuge

available. The station includes a cafe and will be surrounded by a cleared area. Janet Stanley, a specialist in arson who has been widely quoted by opponents of the gondola ride, believes more tourists being attracted to the area will also increase the risk of bushfires being deliberately lit. “Most arsonists light fires close to an urban setting. Bringing large numbers of visitors to the heavily forested area close to an urban environment would greatly increase the risk of an arson attack in the area,” Dr Stanley said.

Since 1997 there have been three recorded bushfires, which burned between 160 and five hectares but which were brought under control without any great loss to property. Major fires (loss of human life or property of $5 million or more) listed in the shire’s fire management plan start from Black Thursday in February 1851 – a statewide fire that saw countryside around Western Port covered by “raging flames” – to January 2008 when a 48ha fire affected private and government land in Boundary Rd, Dromana. Continued Page 10