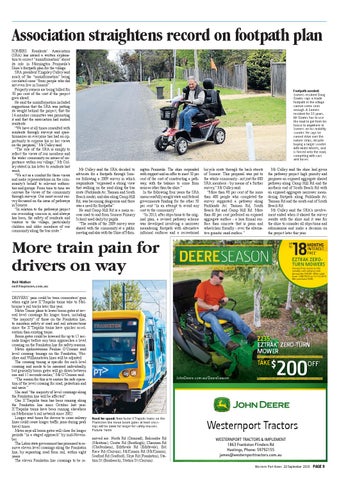 Association straightens record on footpath plan SOMERS Residentsâ&#x20AC;&#x2122; Association (SRA) has issued a written explanation to correct â&#x20AC;&#x153;misinformationâ&#x20AC;? about its role in Mornington Peninsulaâ&#x20AC;&#x2122;s Shireâ&#x20AC;&#x2122;s footpath plan for the village. SRA president Kingsley Culley said much of the â&#x20AC;&#x153;misinformationâ&#x20AC;? being circulated came â&#x20AC;&#x153;from people who did not even live in Somersâ&#x20AC;?. Property owners are being billed for 50 per cent of the cost if the project goes ahead. He said the misinformation included suggestions that the SRA was putting its weight behind the project, that the 14-member committee was promoting it and that the association had misled residents. â&#x20AC;&#x153;We have at all times consulted with residents through surveys and questionnaires so everyone has had an opportunity to express his or her views on the proposal,â&#x20AC;? Mr Culley said. â&#x20AC;&#x153;The role of the SRA is simply to reflect the views of our members and the wider community on issues of importance within our village,â&#x20AC;? Mr Colley stated in his letter to residents last week. â&#x20AC;&#x153;We act as a conduit for these views and make representations on the communityâ&#x20AC;&#x2122;s behalf to relevant authorities and groups. From time to time we canvass the views of the community through surveys. Our most recent survey focussed on the issue of pathways in Somers. â&#x20AC;&#x153;In relation to the pathways project our overriding concern is, and always has been, the safety of residents and visitors to the village, particularly children and older members of our community along the bus route.â&#x20AC;?

Footpath needed: Somers resident Doug Coates says a made footpath in the village cannot come soon enough. A Somers resident for 33 years, Mr Coates has to use the road to get from his house to anywhere in Somers on his mobility scooter. He says he cannot drive over the nature strips, despite buying a larger scooter with wider wheels, and is forced onto the road, competing with cars and buses.

Mr Culley said the SRA decided to advocate for a footpath through Somers following a 2009 survey in which respondents â&#x20AC;&#x153;expressed a strong view that walking on the road along the bus route (Parklands Av, Tasman and South Beach roads), and also along Camp Hill Rd, was becoming dangerous and there was a need for footpathsâ&#x20AC;?. He said Camp Hill Rd is a main access road to and from Somers Primary School used daily by pupils. â&#x20AC;&#x153;The results of the 2009 survey were shared with the community at a public meeting and also with the Shire of Morn-

ington Peninsula. The shire responded with support and an offer to meet 50 per cent of the cost of constructing a pathway, with the balance to come from sources other than the shire.â&#x20AC;? In the following four years the SRA unsuccessfully sought state and federal governments funding for the other 50 per cent â&#x20AC;&#x153;in an attempt to avoid any cost to the communityâ&#x20AC;?. â&#x20AC;&#x153;In 2013, after objections to the original plan, a revised pathway scheme was developed involving a narrower meandering footpath with alternative informal surfaces and a recreational

bicycle route through the back streets of Somers. This proposal was put to the whole community - not just the 680 SRA members - by means of a further survey,â&#x20AC;? Mr Culley said. â&#x20AC;&#x153;More than 90 per cent of the more than 400 people who completed the survey supported a pathway along Parklands Av, Tasman Rd, South Beach Rd and Camp Hill Rd. More than 60 per cent preferred an exposed aggregate surface - a less formal surface than concrete that is pram and wheelchair friendly - over the alternative granitic sand surface.â&#x20AC;?

Mr Culley said the shire had given the pathway project high priority and proposes an exposed aggregate shared pathway along Camp Hill Rd and the northern end of South Beach Rd with an exposed aggregate narrower meandering footpath along Parklands Av, Tasman Rd and the south end of South Beach Rd. Mr Culley said the SRAâ&#x20AC;&#x2122;s involvement ended when it shared the survey results with the shire and it was for the shire to consider all objections and submissions and make a decision on the project later this year.

Need for speed: New faster Xâ&#x20AC;&#x2122;Trapolis trains on the Frankston line mean boom gates at level crossings will be down for longer for safety reasons. Picture: Yanni