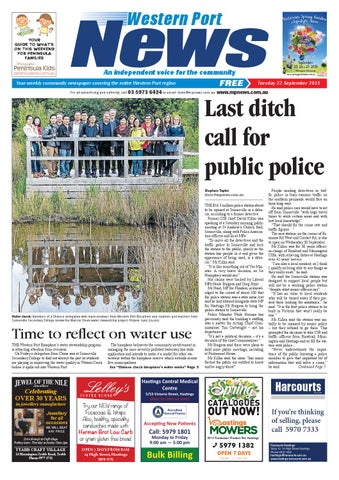 Time to reflect on water use THE Western Port Biosphere’s water stewardship program is attracting attention from overseas. On Friday a delegation from China was at Somerville Secondary College to find out abouyt the part its students are playing in improving the water quality in Watson Creek before it spills out into Western Port.

The biosphere beliueves the community involvement in managing the once severely polluted waterway has wide application and intends to make it a model for other waterways within the biosphere reserve which extends across five municipalities. See “Chinese check biosphere’s water works” Page 5

THE $16.3 million police station about to be opened at Somerville is a debacle, according to a former detective. Former CIB chief David Killin was speaking at a Saturday morning public meeting at St Andrew’s Church Hall, Somerville, along with Police Association officers and local MPs. “To move all the detectives and the traffic police to Somerville and lock the station to the public, purely so the station has people in it and gives the appearance of being used, is a debacle,” Mr Killin said. “It is like something out of Yes Minister. A very brave decision, as Sir Humphrey would say.” His claims were backed by Liberal MPs Neale Burgess and Greg Hunt. Mr Hunt, MP for Flinders, acknowledged to the crowd of about 100 that the police station was a state issue, but said he had lobbied alongside state MP for Hastings Mr Burgess to bring the police station to Somerville. Police Minister Wade Noonan has previously said the building’s staffing was a matter for Acting Chief Commissioner Tim Cartwright – not his department. “It’s not a political decision – it’s a decision of the chief commissioner.” Mr Burgess said there were plans to hold more public meetings, including at Parliament House. Mr Killin said the issue “has many factors the public are entitled to know and be angry about”.

People needing detectives or traffic police in busy summer traffic on the southern peninsula would face an hour-long wait. He said police cars would have to set off from Somerville “with huge travel times to work certain areas and with lost local knowledge”. “That should fix the crime rate and traffic figures ...” The new station, on the corner of Eramosa Rd West and Coolart Rd, is due to open on Wednesday 30 September. Mr Killen was for 30 years officerin-charge of Rosebud and Mornington CIBs, with relieving duties at Hastings over 42 years’ service. “I am also a local resident, so I think I qualify as being able to say things as they really exist,” he said. He said the Somerville station was designed to support local people but will not be a working police station “despite what senior officers say”. “It has no value to local residents who will be turned away if they present there looking for assistance,” he said. “It is the first police station to be built in Victoria that won't really be one.” Mr Killen said the station was initially to be manned by senior police – but they refused to go there. This prompted the decision to take CIB and traffic officers from Rosebud, Mornington and Hastings and so fill the station with police. “Never underestimate the importance of the public knowing a police member to give that important bit of information that will solve a crime,” he said. Continued Page 5