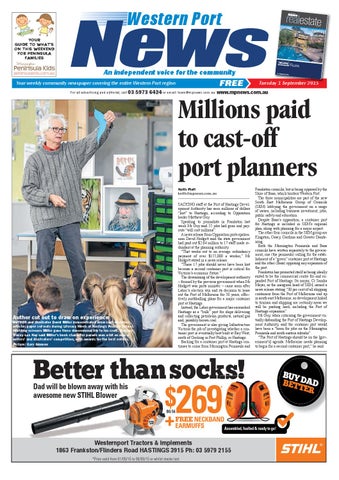 Keith Platt keith@mpnews.com.au SACKING staff at the Port of Hastings Development Authority has seen millions of dollars “lost” to Hastings, according to Opposition leader Matthew Guy. Speaking to journalists in Frankston last week Mr Guy said 55 jobs had gone and payouts “will cost millions”. A news release from Opposition ports spokesman David Hodgett said the state government had paid out $2.64 million to 17 staff made redundant at the planning authority. “That works out to an average redundancy payment of over $155,000 a worker,” Mr Hodgett stated in a news release. “These 17 jobs should never have been lost because a second container port is critical for Victoria’s economic future.” The downsizing of the development authority – formed by the previous government when Mr Hodgett was ports minister – came soon after Labor’s election win and its decision to lease out the Port of Melbourne for 50 years, effectively mothballing plans for a major container port at Hastings. Instead, the Labor government has earmarked Hastings as a “bulk” port for ships delivering and collecting petroleum products, natural gas and, possibly brown coal. The government is also giving Infrastructure Victoria the job of investigating whether a container port is eventually best built at Bay West, north of Geelong in Port Phillip, or Hastings. Backing for a container port at Hastings continues to come from Mornington Peninsula and

Author cut out to draw on experience

Better than socks! $269 Dad will be blown away with his awesome new STIHL Blower

Frankston councils, but is being opposed by the Shire of Bass, which borders Western Port. The three municipalities are part of the new South East Melbourne Group of Councils (SEM) lobbying the government on a range of issues, including business investment, jobs, public safety and education. Despite Bass’s opposition, a container port for Hastings is included in SEM’s regional plan, along with planning for a major airport. The other four councils in the SEM group are Kingston, Casey, Cardinia and Greater Dandenong. Both the Mornington Peninsula and Bass councils have written separately to the government, one (the peninsula) calling for the establishment of a “green” container port at Hastings and the other (Bass) opposing any expansion of the port. Frankston has promoted itself as being ideally suited to be the commercial centre for and expanded Port of Hastings. Its mayor, Cr Sandra Mayer, as the inaugural head of SEM, issued a news release stating “30 per cent of all shipping containers from the Port of Melbourne end up in south east Melbourne, so development linked to tourism and shipping are certainly areas we will be pushing hard, including the Port of Hastings expansion”. Mr Guy, when criticising the government virtually disbanding the Port of Hastings Development Authority, said the container port would have been a “boon for jobs on the Mornington Peninsula and south eastern suburbs”. “The Port of Hastings should be on the [government’s] agenda. Melbourne needs planning to begin for a second container port,” he said.