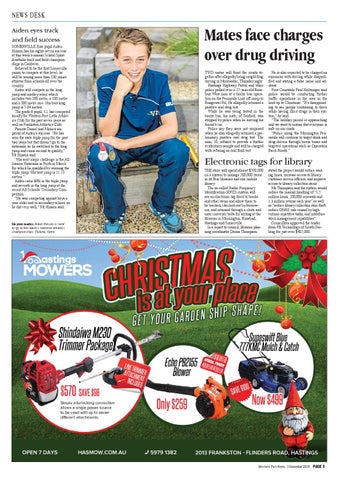 NEWS DESK Aiden eyes track and field success SOMERVILLE Rise pupil Aiden Hinson has his sights set on success at this week’s annual School Sport Australia track and field championships in Canberra. Believed to be the first Somerville junior to compete at this level, he will be among more than 100 junior athletes from schools all over the country. Aiden will compete in the long jump and medley relay, which includes two 200 metre, a 100 metre and a 300 metre race. His best long jump is 5.04 metres. The grade 6 pupil, 12, has competed locally for Western Port Little Athletics Club for the past seven years as well as Frankston Athletics Club. Parents Daniel and Monica are proud of Aiden’s success: “He has won the state triple jump for the past two years but that doesn’t go to the nationals, so he switched to the long jump and came second to qualify,” Mr Hinson said. “His next major challenge is the All Juniors Nationals in Perth in March for which he qualified by winning the triple jump. His best jump is 11.13 metres.” Aiden came fifth in the triple jump and seventh in the long jump at the recent All Schools’ Secondary Competition. “He was competing against boys a year older and in secondary school, so he did very well,” Mr Hinson said.

On your marks: Aiden Hinson is rarin’ to go at this week’s national athletics championships. Picture: Yanni

Mates face charges over drug driving TWO mates will front the courts together after allegedly being caught drug driving in Moorooduc, Thursday night. Hastings Highway Patrol and other police pulled over a 27-year-old Rosebud West man at a booze bus operation on the Peninsula Link off-ramp to Bungower Rd. He allegedly returned a positive oral drug test. While he was being tested in the booze bus, his mate, of Seaford, was stopped by police when he moving his friend’s car. Police say they were not surprised when he also allegedly returned a preliminary positive oral drug test. The man, 20, refused to provide a further evidentiary sample and will be charged with refusing an oral fluid test.

He is also expected to be charged on summons with driving while disqualified and stating a false name and address. First Constable Paul Holtzinger said police would be conducting further traffic operations in the area in the lead-up to Christmas. “It’s disappointing to see people continuing to drive while having illicit drugs in their system,” he said. “The holiday period is approaching and we want to ensure that everyone is safe on our roads. “Police along the Mornington Peninsula will continue to target drink and drug drivers through booze buses and targeted operations such as Operation Back-Roads.”

Electronic tags for library THE shire will spend almost $500,000 on a system to manage 200,000 items in its four libraries and one mobile library. The so-called Radio Frequency Identification (RFID) system will see an electronic tag fixed to books and other items and allow them to be tracked, checked-out by borrowers, and returned through a chute and onto conveyor belts for sorting at the libraries in Mornington, Rosebud, Hastings and Somerville. In a report to council, libraries planning coordinator Donna Thompson