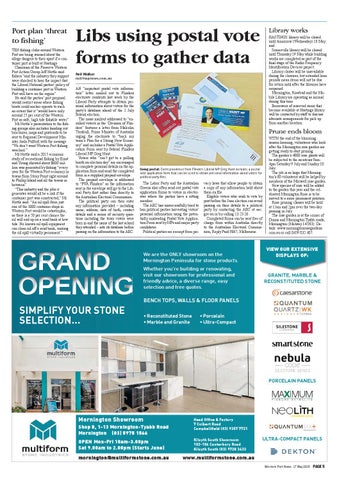 Port plan ‘threat to fishing’ TEN fishing clubs around Western Port are being warned about the allege dangers to their sport if a container port is built at Hastings. Chairman of the Preserve Western Port Action Group Jeff Nottle said fishers “and the industry they support were shocked to hear the impact that the Liberal National parties’ policy of building a container port in Western Port will have on the region”. He said the parties’ port proposal would restrict areas where fishing boats could anchor operate to such an extent that it “would leave only around 25 per cent of the Western Port as safe, high tide fishable water”. Mr Nottle’s presentation to the fishing groups also includes handing out brochures, maps and postcards to be sent to Regional Development Minister Jaala Pulford with the message “We don’t want Western Port fishing wrecked.” Mr Nottle said a 2015 economic study of recreational fishing by Ernst and Young showed about $600 million was generated by fishing “every year for the Western Port economy in towns from Stony Point right around to Phillip Island and all the towns in between”. “This industry and the jobs it generates would all be a risk if the container port was constructed,” Mr Nottle said. “An oil spill from just one of the 3000 container ships in Western Port would be catastrophic, as there is a 50 per cent chance the oil will end up on a mud bank at low tide. No known oil spill equipment can clean oil off a mud bank, making the oil spill virtually permanent.”

Library works HASTINGS library will be closed until tomorrow (Wednesday) 18 May and Somerville library will be closed until Thursday 19 May while building works are completed as part of the final stage of the Radio Frequency Identification Devices project. Library chutes will be unavailable during the closures, but extended loan periods mean items will not be due for return until after the libraries have reopened. Mornington, Rosebud and the Mobile Library are operating as normal during this time. Borrowers of reserved items that become available at Hastings library will be contacted by staff to discuss alternate arrangements for pick up from another location.

Neil Walker neil@mpnews.com.au AN “important postal vote information” letter mailed out to Flinders electorate residents last week by the Liberal Party attempts to obtain personal information about voters for the party’s database ahead of the 2 July federal election. The mass mailout addressed to “enrolled voter/s in the ‘Division of Flinders” features a letter from Malcolm Turnbull, Prime Minister of Australia urging the electorate to “back my team’s Plan for a Strong New Economy” and includes a Postal Vote Application Form sent by federal Flinders Liberal MP Greg Hunt. Voters who “can’t get to a polling booth on election day” are encouraged to complete personal details on the application form and send the completed form in a supplied prepaid envelope. The prepaid envelope is addressed to “PVA Flinders” so the information sent in the envelope will go to the Liberal Party first rather than directly to the Australian Electoral Commission. The political party can then enter any information provided – including name, address, date of birth, contact details and a series of security questions including the town voters were born in and the name of the last school they attended – into its database before passing on the information to the AEC.

The Labor Party and the Australian Greens also often send out postal vote application forms to voters in electorates where the parties have a sitting member. The AEC has unsuccessfully tried to ban political parties harvesting voters’ personal information using the potentially misleading Postal Vote Application Form sent by MPs and major party candidates. Political parties are exempt from pri-

vacy laws that allow people to obtain a copy of any information held about them on file. Eligible voters who wish to vote by post before the June election can avoid passing on their details to a political party by contacting the AEC at aec. gov.au or by calling 13 23 26. Completed forms can be sent free of charge from within Australia directly to the Australian Electoral Commission, Reply Paid 9867, Melbourne.

We are the ONLY showroom on the Mornington Peninsula for stone products. Whether you’re building or renovating, visit our showroom for professional and friendly advice, a diverse range, easy selection and free quotes.

WITH the end of the blooming season looming, volunteers who look after the Mornington rose garden are getting ready to start pruning. The garden’s 4000 rose plants will be subjected to the secateurs 9am4pm Saturday 9 July and Sunday 10 July. The job is so large that Mornington’s 60 volunteers will be helped by members of the Morwell rose garden. New species of rose will be added to the garden this year and the celebrated Mornington Rose is to be moved to a more prominent position. Rose pruning classes will be held at 11am and 2pm over the two-day pruning in July. The rose garden is at the corner of Dunns and Mornington Tyabb roads, Mornington (Melway 145H3). Details: www.morningtonrosegardens. com.au or call 0459 032 407.

VIEW OUR EXTENSIVE DISPLAYS OF: