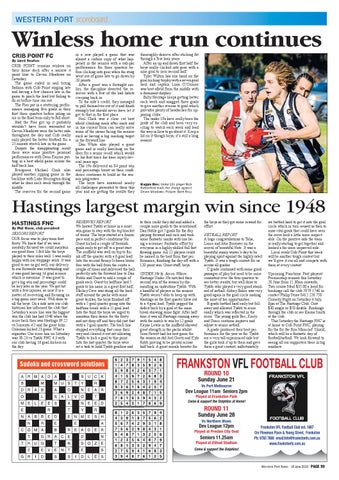 By Jared Newton CRIB POINT remains winless on their home deck after a narrow 4 point loss to Devon Meadows on Saturday. The game ended in nail biting fashion with Crib Point surging late and having a few chances late in the game to pinch the lead but failing to do so before time ran out. The Pies put in a stuttering performance managing five goals in their first three quarters before piling on six in the final term only to fall short. Had the Pies got up it probably wouldn’t have been warranted as Devon Meadows were the better side throughout the day and Crib really only played the better football for a 25-minute stretch late in the game. Despite the disappointing result there were some positive personal performances with Dean Kairies putting in a best afield game across the half back line. Evergreen Michael Cook also played another ripping game in the backline with Luke Herrington doing what he does each week through the middle. The reserves for the second game

in a row played a game that was almost a carbon copy of what happened in the seniors with a sub-par performance for three quarters before clicking into gear when the sting went out of game late to go down by 20 points. After a great win a fortnight earlier, the discipline deserted the reserves with a few of the bad habits creeping back in. To the side’s credit, they managed to pull themselves out of it and finish strongly but should never have let it get to that in the first place. Neil Clark was a clear cut best afield clunking mark after mark and in his current form can really solve some of the issues facing the seniors such as having a big marking target in the forward line. Dan White also played a great game and is really knocking on the door for a senior recall which would be his first since his knee injury several years ago. The 19s delivered an 84 point win and percentage boost as their confidence continues to build as the season progresses. The boys have answered nearly all challenges presented to them this year and are getting the results they

thoroughly deserve after sticking fat through a few lean years. After an up and down first half the boys really clicked into gear with a nine goal to zero second half. Tyler Wilton has one hand on the goal kicking trophy with a seven goal haul and captain Liam O’Connor was best afield from the middle with a dominant display. Billy Heritage keeps getting better each week and snagged three goals to give another avenue to goal which provides plenty of headaches for opposing clubs. The under 19s have really been the pride of the club and been very exciting to watch each week and lead the way in how to go about it. Keep a lid on it though boys, it’s still a long season!

By Phil Stone, club president SENIORS REPORT OUR focus was to play team first footy. We knew that if we were mentally focused we could maintain our good form. I felt like the boys played to their roles well. I was really happy with our stoppage work. It was good to see us gel well, our delivery to our forwards was outstanding and it was good having 16 goal scorers which is awesome. It was great to get a big win and percentage could be key later in the year. We got hit with a few injuries, so now it is a matter of recovering and focusing on a big game next week. Well done to all the boys. On a side note our club historian has informed the club that Saturday’s score line was the biggest win the club has had 1948 when the score back then was Hastings 39.22 vs Sorrento 4.2 and the great John Coleman kicked 23 goals. What a superstar. Our score line on Saturday was 38.23 vs Tyabb FNC 4.3 with our club having 16 goal-kickers on the day.

RESERVES REPORT We hosted Tyabb at home in a must win game to stay with the top bracket of teams. The boys started at a frantic pace and in perfect conditions Nic Guest kicked a couple of freakish goals early to get off to a great start. The midfield was well on top to finish off the quarter with a 6 goal lead. Into the second Benny Schroen broke free with the ball from the centre a couple of times and delivered the ball perfectly into the forward line to Dan Noble and Guest to add a couple of goals each. Guest by halftime had 5 goals to his name in a great first half, Mickey Cave was doing all the hard stuff around the packs with some great tackles, the boys finished off with a 5 goal quarter going into the halftime break with a 11 goal lead . Into the third the boys we urged to maintain their desire for the footy and not drop off and they did just that with a 7 goal quarter. The back line stopped everything that came their way and cleared it out not allowing Tyabb to kick a goal to this point. Into the last quarter the boys were set a task to hold Tyabb goalless and

the boys as they got some reward for effort.

to their credit they did and added a couple more goals to the scoreboard. Dan Noble got 5 goals for the day playing forward and ruck and took some fantastic marks with one being a screamer. Fantastic effort by everyone in a highly skilled full fast flowing game. All 22 players could be named in the best from that performance, finishing the day off with a 120 point win. Great stuff, boys. UNDER 19s by Aaron Wilson Hastings Under 19s notched their second win of the season by dismantling an underdone Tyabb. With a handful of players in the seniors Tyabb weren’t able to keep up with Hastings as the first quarter blew out to a 4 goal lead. Tyabb pegged the deficit back by a goal at the main break showing some fight. After half time it was all Hastings running away with the match to win by 12 goals. Kayne Lewis in the midfield showed great strength in the packs whilst Sean Hewitt had his best game for the season as did Joel Goetz and Kyle Robb proving to be pivotal across half back. A great morale booster for

NETBALL REPORT A huge congratulations to Talia, Lance and Jobe Brouwer on the arrival of beautiful Nate. It was a beautiful sunny winter’s day to be playing sport against the highly rated Tyabb. It was a tough contest for us across all grades. C grade continued with some good passages of play but need to be more consistent over the four quarters to see better results, but well done to Tyabb who played a very good standard of netball. Abbey Baker was very good again in the goal circle making the most of her opportunities. B grade battled hard early but fell away and allowed Tyabb to score easily which was reflected in the score. The young girls Bec, Keely and Grace continue improve and adjust to senior netball. A grade produced their best performance for the year so far. Tyabb are a very tall experienced side but the girls took it up to them and gave them a great contest, unfortunately

we battled hard to get it into the goal circle which in turn caused us then to miss vital goals that could have seen the score look a little more respectable. On the positive side the team is really starting to gel together and looked a far more improved side. Local rivals Crib Point this week will be another tough contest but we’ll give it our all and compete with them at every contest. Upcoming Functions: Past players/ Premiership reunion this Saturday 20 June from 11.30am onwards, Two course Meal $35.00 a head for bookings call the club 5979 1740 or contact Philip Stone 0412 226 758. Comedy Night on Saturday 4 July, 8pm at The Hastings Club. Cost $30 single or $50 double. Bookings through the club or see Emma Smith at the club. This Saturday the Hastings FNC is at home to Crib Point FNC, playing for the for the Ron Moncrief Shield, which will be a fantastic day of football/netball. We look forward to seeing all our supporters there in big numbers.

ROUND 11 Sunday June 28 Vs Northern Blues

Seniors 11.25am Played at Etihad Stadium