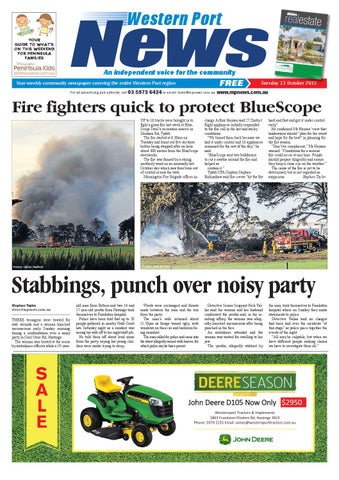 Fire fighters quick to protect BlueScope UP to 16 trucks were brought in to fight a grass fire last week at BlueScope Steel’s recreation reserve in Denham Rd, Tyabb. The fire started at 6.30am on Tuesday and burnt out five hectares before being stopped after an hour about 300 metres from the BlueScope steelworks. The fire was fanned by a strong northerly wind on an unusually hot October day which saw fires burn out of control across the state. Mornington Fire Brigade officer-in-

charge Arthur Haynes said 27 District Eight appliances initially responded to the fire call in the hot and sticky conditions. “We turned them back because we had it under control and 16 appliances remained for the rest of the day,” he said. “BlueScope sent two bulldozers to cut a swathe around the fire and helped us contain it.” Tyabb CFA Captain Stephen Birkinshaw said fire crews “hit the fire

hard and fast and got it under control early”. He confirmed Mr Haynes’ view that landowners should “plan for the worst and hope for the best” in planning for the fire season. “Don’t be complacent,” Mr Haynes warned. “Conditions for a serious fire could occur at any time. People should prepare diligently and ensure they keep a close eye on the weather.” The cause of the fire is yet to be determined, but is not regarded as suspicious. Stephen Taylor

Stabbings, punch over noisy party Stephen Taylor steve@mpnews.com.au THREE teenagers were treated for stab wounds and a woman knocked unconscious early Sunday morning during a confrontation over a noisy party in Cool Store Rd, Hastings. The woman was treated at the scene by ambulance officers while a 19-year-

old man from Bittern and two 16 and 17 year old youths from Hastings took themselves to Frankston hospital. Police have been told that up to 20 people gathered in nearby Gold Court late Saturday night as a resident was seeing his wife off to her night shift job. He told them off about loud noise from the party, saying his young children were inside trying to sleep.

Words were exchanged and threats made between the man and the trio from the party. The man’s wife returned about 11.50pm as things turned ugly, with windows on their car and bedroom being smashed. The man called for police and came into the street allegedly armed with knives, for which police say he has a permit.

Detective Senior Sergeant Nick Vallas said the woman and her husband confronted the youths and, in the resulting affray, the woman was allegedly knocked unconscious after being punched in the face. An ambulance attended and the woman was treated for swelling to her jaw. The youths, allegedly stabbed by

the man, took themselves to Frankston hospital where on Sunday they made statements to police. Detective Vallas said no charges had been laid over the incidents “at this stage” as police piece together the events of the night. “All may be culpable, but when we have different people making claims we have to investigate them all.”