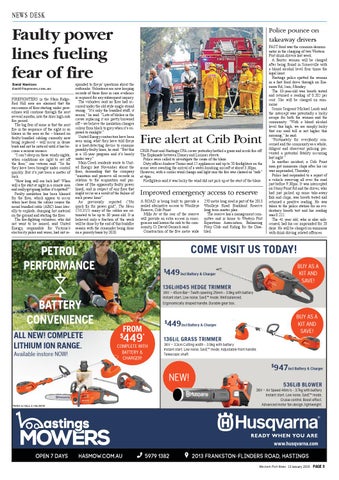 Faulty power lines fueling fear of fire David Harrison david@mpnews.com.au FIREFIGHTERS in the Main RidgeRed Hill area are alarmed that the succession of fires starting under powerlines will continue through the next several months, into the drier high-risk fire period. The big fear of some is that the next fire in the sequence of the eight or so blazes in the area so far – blamed on faulty bundled cabling currently now being replaced – will occur in dense bush and not be noticed until it has become a serious menace. “I can’t sleep on these windy nights, when conditions are right to set off the fires,” one veteran said. “So far they have been brought under control quickly. But it’s just been a matter of luck. “How long will our luck last? When will a fire start at night in a remote area and really get going before it’s spotted?” Faulty insulation has been blamed for the fires, which appear to occur when heat from the cables causes the aerial bundled cable (ABC) lines literally to explode, dumping hot material on the ground and starting the fires. The fire-fighting volunteer, who did not want to be named, said United Energy, responsible for Victoria’s electricity poles and wires, had not re-

sponded to fireys’ questions about the outbreaks. Volunteers are now keeping records of these fires in case evidence is required for any subsequent inquiry. The volunteer said no fires had occurred under the old style single strand wiring. “It’s only the bundled stuff, it seems,” he said. “Lots of blokes in the crews replacing it are pretty browned off – we believe the insulation changes colour from black to grey when it’s exposed to sunlight.” United Energy contractors have been seen using what they have told fireys is a heat-detecting device to examine possibly faulty lines, he said. “But this is a 10-year program and it’s barely under way.” Main Creek residents wrote to United Energy last November about the fires, demanding that the company “maintain and preserve all records in relation to the acquisition and purchase of [the apparently faulty power lines], and in respect of any fires that might occur as a result of the failure of such power lines”. As previously reported (“No quick fix for power grid”, The News 15/12/15) many of the cables are estimated to be up to 30 years old. It is believed only a fraction of the work will be done by the end of this bushfire season with the remainder being done on a priority basis by 2020.

Fire alert at Crib Point CRIB Point and Hastings CFA crews yesterday battled a grass and scrub fire off The Esplanade between Disney and Lorimer streets. Police were called to investigate the cause of the blaze. Duty officer Andrew Turner said 15 appliances and up to 50 firefighters on the scene were awaiting the arrival of a water-bombing aircraft at about 3.30pm. However, with a cooler wind change and light rain the fire was classed as “safe” at 4pm. Firefighters said it was lucky the wind did not pick up at the start of the blaze.

Improved emergency access to reserve A ROAD is being built to provide a sealed alternative access to Woolleys Reserve, Crib Point. Mills Av at the rear of the reserve will provide an extra access in emergencies and lesson the risk to the community, Cr David Garnock said. Construction of the five metre wide

250 metre long road is part of the 2013 Woolleys Road Bushland Reserve long term master plan. The reserve has a management committee and is home to Western Port Equestrian Association, Balnarring Pony Club and Riding for the Disabled.

FAST food was the common denominator in the charging of two Western Port drink-drivers last week. A Baxter woman will be charged after being found in Somerville with a blood alcohol level four times the legal limit. Hastings police spotted the woman in a fast food drive through on Eramosa Rd, 1am, Monday. The 33-year-old was breath tested and returned a reading of 0.202 per cent. She will be charged on summons. Senior Sergeant Michael Lamb said the intercept was potentially a lucky escape for both the woman and the community. “With a blood alcohol level this high, we are simply lucky that our road toll is not higher this morning,” he said. “Fortunately for everybody concerned and the community as a whole, diligent and observant policing prevented a potential fatality occurring last night.” In another incident, a Crib Point man got minimum chips after his car was impounded, Thursday. Police had responded to a report of a vehicle swerving all over the road just before 9.30pm. It was intercepted on Stony Point Rd and the driver, who had just picked up some take-away fish and chips, was breath tested and returned a positive reading. He was taken to the police station for an evidentiary breath test and his reading was 0.222. The 41 year old, who is also unlicensed, had his car impounded for 28 days. He will be charged on summons with drink driving related offences.

BUY AS A KIT AND SAVE!

BUY AS A KIT AND SAVE!