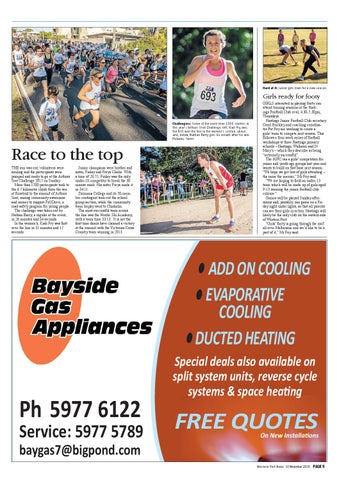 Hard at it: Junior girls train for a new season.

Challengers: Some of the more than 1500 starters in this year’s Arthurs Seat Challenge, left; Kiah Fry, was the first over the line in the women’s section, above; and, below, Nathan Barry gets his breath after his win. Pictures: Yanni

Race to the top THE sun was out, volunteers were smiling and the participants were pumped and ready to go at the Arthurs Seat Challenge 2015 on Sunday. More than 1500 participants took to the 6.7 kilometre climb from the sea at Rosebud to the summit of Arthurs Seat, raising community awareness and money to support Fit2Drive, a road safety program for young people. The challenge was taken out by Nathan Barry, a regular at the event, in 26 minutes and 34 seconds. In the women’s, Kiah Fry was first over the line in 31 minutes and 17 seconds.

Junior champions were brother and sister, Finlay and Freya Clarke. With a time of 28:55, Finlay was the only under-18 competitor to break the 30 minute mark. His sister Freya made it in 34:11. Dromana College and its 50-member contingent took out the school group section, while the community team trophy went to Chisholm. The most successful team across the line was the Nordic Ski Academy, with a team time 33:13. It is not the first time skiers have claimed a victory at the summit with the Victorian Cross Country team winning in 2013.

GIRLS interested in playing footy can attend training sessions at the Hastings Football Club oval, 4.30-5.30pm, Thursdays. Hastings Junior Football Club secretary Carol Buckley and coaching coordinator Pat Foy are working to create a girls’ team to compete next season. This follows a four-week series of football workshops at three Hastings primary schools – Hastings, Wallaroo and St Mary’s – which they describe as being “extremely successful”. The HJFC ran a girls’ competition for junior and youth-age groups last year and wants to build on that base next season. “We hope we get lots of girls attending – the more the merrier,” Mr Foy said. “We are hoping to field an under-13 team which will be made up of girls aged 9-13 wearing the junior football club colours.” Games will be played Sunday afternoons and, possibly, one game on a Friday night under lights, so that all parents can see their girls in action. Hastings will likely be the only club on the eastern side of Western Port. “Girls’ footy is going through the roof all over Melbourne and we’d like to be a part of it,” Mr Foy said.