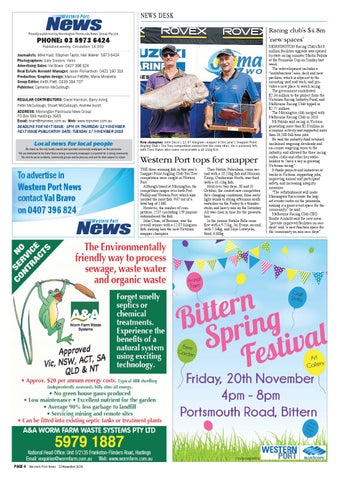 Western Port tops for snapper THE three winning fish in this year’s Snapper Point Angling Club Tea Tree competition were caught in Western Port. Although based at Mornington, the competition ranges over both Port Phillip and Western Port, which also yielded the most fish: 947 out of a total bag of 1360. However, the number of competitors, 1537 (including 159 juniors) outnumbered the fish. John Close, of Boronia, was the overall winner with a 12.07 kilogram fish, making him the new Victorian snapper champion.

Theo Hatzis, Pakenham, came second with a 10.23kg fish and Norman Kemp, Cranbourne North, was third with a 10.11kg fish. Held over two days, 30 and 31 October, the contest saw competitors face changing conditions, from early light winds to strong afternoon south easterlies on the Friday to a thunderstorm and heavy rain on the Saturday. All was clear in time for the presentation. In the juniors Natalie Bills came first with a 9.51kg, Jai Evans, second, with 7.34kg, and Skye Lutwyche, third, 6.68kg.

MORNINGTON Racing Club's $4.8 million facilities upgrade was opened by state racing minister Martin Pakula at the Peninsula Cup on Sunday last week. The redevelopment includes a "multifunction" area, deck and new pavilion, which is adjacent to the mounting yard and track, and provides a new place to watch racing. The government contributed $2.34 million to the project from the Victorian Racing Industry Fund, and Melbourne Racing Club tipped in $2.77 million. The Mornington club merged with Melbourne Racing Club in 2010. Mr Pakula said racing in Victoria generating more than $2.8 billion in economic activity and supported more than 26,500 full-time jobs. He said the industry fund returned unclaimed wagering dividends and on-course wagering taxes to the industry, and allowed the three racing codes, clubs and other key stakeholders to "have a say in growing Victorian racing". It funds projects and initiatives at tracks in Victoria, supporting jobs, improving animal and participant safety, and increasing integrity measures. "The refurbishment will make Mornington Racecourse the largest events centre on the peninsula, making it a great event space for the community," he said. Melbourne Racing Club CEO Brodie Arnhold said the new areas "provide improved facilities on race days" and "a new function space for the community on non-race days".