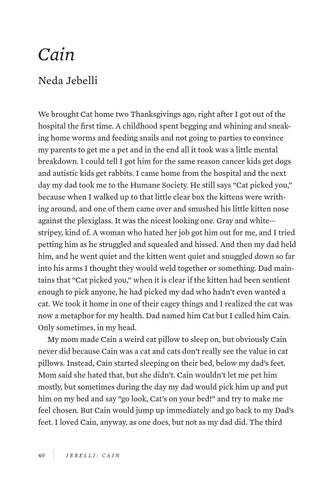 Cain Neda Jebelli We brought Cat home two Thanksgivings ago, right after I got out of the hospital the first time. A childhood spent begging and whining and sneaking home worms and feeding snails and not going to parties to convince my parents to get me a pet and in the end all it took was a little mental breakdown. I could tell I got him for the same reason cancer kids get dogs and autistic kids get rabbits. I came home from the hospital and the next day my dad took me to the Humane Society. He still says “Cat picked you,” because when I walked up to that little clear box the kittens were writhing around, and one of them came over and smushed his little kitten nose against the plexiglass. It was the nicest looking one. Gray and white— stripey, kind of. A woman who hated her job got him out for me, and I tried petting him as he struggled and squealed and hissed. And then my dad held him, and he went quiet and the kitten went quiet and snuggled down so far into his arms I thought they would weld together or something. Dad maintains that “Cat picked you,” when it is clear if the kitten had been sentient enough to pick anyone, he had picked my dad who hadn’t even wanted a cat. We took it home in one of their cagey things and I realized the cat was now a metaphor for my health. Dad named him Cat but I called him Cain. Only sometimes, in my head. My mom made Cain a weird cat pillow to sleep on, but obviously Cain never did because Cain was a cat and cats don’t really see the value in cat pillows. Instead, Cain started sleeping on their bed, below my dad’s feet. Mom said she hated that, but she didn’t. Cain wouldn’t let me pet him mostly, but sometimes during the day my dad would pick him up and put him on my bed and say “go look, Cat’s on your bed!” and try to make me feel chosen. But Cain would jump up immediately and go back to my Dad’s feet. I loved Cain, anyway, as one does, but not as my dad did. The third