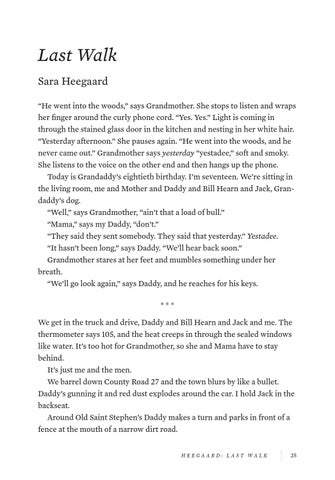 Last Walk Sara Heegaard “He went into the woods,” says Grandmother. She stops to listen and wraps her finger around the curly phone cord. “Yes. Yes.” Light is coming in through the stained glass door in the kitchen and nesting in her white hair. “Yesterday afternoon.” She pauses again. “He went into the woods, and he never came out.” Grandmother says yesterday “yestadee,” soft and smoky. She listens to the voice on the other end and then hangs up the phone. Today is Grandaddy’s eightieth birthday. I’m seventeen. We’re sitting in the living room, me and Mother and Daddy and Bill Hearn and Jack, Grandaddy’s dog. “Well,” says Grandmother, “ain’t that a load of bull.” “Mama,” says my Daddy, “don’t.” “They said they sent somebody. They said that yesterday.” Yestadee. “It hasn’t been long,” says Daddy. “We’ll hear back soon.” Grandmother stares at her feet and mumbles something under her breath. “We’ll go look again,” says Daddy, and he reaches for his keys. *** We get in the truck and drive, Daddy and Bill Hearn and Jack and me. The thermometer says 105, and the heat creeps in through the sealed windows like water. It’s too hot for Grandmother, so she and Mama have to stay behind. It’s just me and the men. We barrel down County Road 27 and the town blurs by like a bullet. Daddy’s gunning it and red dust explodes around the car. I hold Jack in the backseat. Around Old Saint Stephen’s Daddy makes a turn and parks in front of a fence at the mouth of a narrow dirt road.