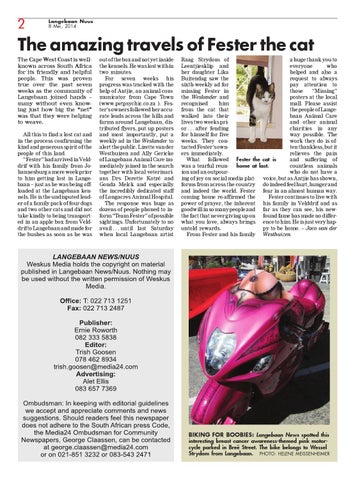 The amazing travels of Fester the cat The Cape West Coast is wellknown across South Africa for its friendly and helpful people. This was proven true over the past seven weeks as the community of Langebaan joined hands – many without even knowing just how big the “net” was that they were helping to weave. All this to find a lost cat and in the process confirming the kind and generous spirit of the people of this land. “Fester”hadarrivedinVelddrif with his family from Johannesburg a mere week prior to him getting lost in Langebaan – just as he was being offloaded at the Langebaan kennels. He is the undisputed leader of a family pack of four dogs and two other cats and did not take kindly to being transported in an apple box from Velddrif to Langebaan and made for the bushes as soon as he was

out of the box and not yet inside the kennels. He was lost within two minutes. For seven weeks his progress was tracked with the help of Antjie, an animal communicator from Cape Town (www.petpsychic.co.za ). Fester’s owners followed her accurate leads across the hills and farms around Langebaan, distributed flyers, put up posters and most importantly, put a weekly ad in the Weslander to alert the public. Lizette van der Westhuizen and Ally Gericke of Langebaan Animal Care immediately joined in the search together with local veterinarians Drs Derette Kotzé and Gonda Melck and especially the incredibly dedicated staff of Longacres Animal Hospital. The response was huge as dozens of people phoned to inform “Team Fester” of possible sightings. Unfortunately to no avail . . . until last Saturday when local Langebaan artist

a huge thank you to Raag Strydom of everyone who Leentjiesklip and helped and also a her daughter Lika request to always Buitendag saw the pay attention to sixth-weekly ad for those “Missing” missing Fester in posters at the local the Weslander and mall. Please assist recognised him the people of Langefrom the cat that baan Animal Care walked into their and other animal lives two weeks pricharities in any or . . . after fending way possible. The for himself for five work they do is ofweeks. They conten thankless, but it tacted Fester’s ownrelieves the pain ers immediately. and suffering of What followed Fester the cat is countless animals was a tearful reun- home at last. who do not have a ion and an outpouring of joy on social media plat- voice, but as Antjie has shown, forms from across the country do indeed feel hurt, hunger and and indeed the world. Fester fear in an almost human way. Fester continues to live with coming home re-affirmed the power of prayer, the inherent his family in Velddrif and as goodwill in so many people and far as they can see, his newthe fact that never giving up on found fame has made no differwhat you love, always brings ence to him. He is just very happy to be home. – Jaco van der untold rewards. From Fester and his family Westhuizen. 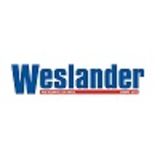