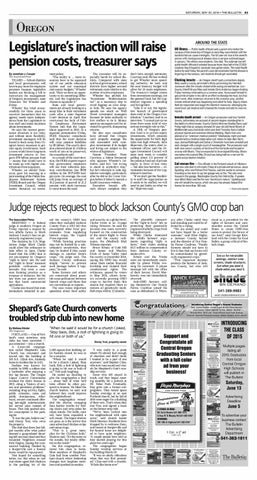 ment policy. The increases will be es&quot;The reality is ... more re- pecially harsh for school dissources have to be squeezed tricts. Compared with state out of our public education and local governments, school system and our municipal districts have higher accrued and county budgets,&quot; Wheeler retirement costs relative to the said. &quot;Here we have an oppor- number of active employees. tunity to do something differWheeler has pitched his ent, and the Legislature has &quot;Investment M o d ernization Act&quot; as a necessary step to chosen to squander it.&quot; State and local govern- avoid digging an even deepments are already looking at a er hole. He says his agency steep hike in their retirement spends too much on Wall costsafter a state Supreme Street investment managers Court decision in April that because he lacks authority to overturned the bulk of Pubhire staffers to do it. Money lic Employees Retirement spent on managers can&#39;t be inSystem cuts that the Legis- vested for growth, dampening

about investments. He says the current gover- lature approved in 2013. In a nance structure is too risky, separate presentation Friday, and without more flexibility, PERS financial consultants investment managers will be forced to back away from Or-

said that the court decision

will raise pension liabilities by $5 billion. The court&#39;s decision allowed about $1.3 billion worth ofcutsto be preserved,

vate equity investments. Such a move would lower long-term i nvestment returns i n O r e - the consultants said. gon&#39;s $70 billion pension fund As a result of the court deci— money that would have to sion, the PERS experts expect

be made upwith higher con- that government employers will see their collective penWheeler, an elected Dem- sion contributions rise $690 ocrat, gave his warning in a million in the 2017-2019 budjoint meeting of the Public Em- getcycle.On average,the cost ployees Retirement System will jump from an average of (PERS) Board and the Oregon 18.2 percent of payroll to 21.2 Investment Council, w h i ch percent, with more increases makes decisions on invest- to come down the road. tributions from taxpayers.

don&#39;t have enough autonomy, Courtney said. He has worked

to getWheeler more spending authority, he said, and the next treasury budget will

allow for 24 more employees. The treasury&#39;s budget comes from investment earnings, not

the general fund, but the Legislature imposes a spending and hiring limit. &quot;Like it or not, the legislative branch of

does exist in the Oregon Constitution,&quot; Courtney said in an

loose from some kind of very serious oversight role in this.&quot; returns. A fifth of Oregon&#39;s penHe also says consultants sion fund is in private equity have advised that Oregon investments, which presents can&#39;tproperly manage the the opportunity for both high r isk associated wit h c o m - risks and high rewards. John plex investments if its budget Skjervem, the state&#39;s chief inand hiring are subject to the vestment officer, said the Orwhims of legislators. egon Investment Council will Senate P r esident P e t er meet next week to consider Courtney, a Salem Democrat pulling about 2.5 percent of who opposes Wheeler&#39;s ini- the pension fund out of private tiative, said he&#39;s &quot;not trying equity in favor of less risky to stand in anybody&#39;s way,&quot; — but also less lucrative — inbut he&#39;s reluctant to cede leg- vestments because of the Legislative oversight, particularly islature&#39;s inaction. &quot;If we don&#39;t get the flexibiliafter he did so for Cover Oregon before it failed to launch a ty to staff the organization as health insurance website. it needs to be staffed, we will E xecutive branch o ff i - need to put limits on what we cials always complain they do,&quot; Skjervem said.

and scarcity on a global level, The p l aintiffs i n t erpretClarke wrote in an 11-page ed the &quot;right to farm&quot; law as ruling. However, he said his protecting their genetically pre-empted other local gov- decision was more narrowly engineered alfalfa crops from ernments from r egulating focused on the construction being destroyed. biotech crops, the Capital of the state&#39;s Right to Farm While Clarke dismissed Press reported. Act and the county ordi- the alfalfa farmers&#39; argu&quot;While farming practices nance, the (Medford) Mail ments regarding &quot;right to may not be limited by a sub- Tribune reported. farm,&quot; their claim seeking urbanite&#39;s sensitivities, they Bruce Schulz of Gold Hill $4.2 million in compensation may be limited if they cause and James and M a rilyn from Jackson County redamage to another farm&#39;s Frink of Sams Valley sued mains alive. crops,&quot; the judge said. The the county in December 2014, S chulz an d t h e F r i n k s Jackson County o r d inance saying the GMO ban would were not immediately reachsimply &quot;serves to prevent cause them undue financial able by phone Friday evesuch damage before it hap- hardship and violated their ning for comment. A phone pens,&quot; he said. c onstitutional r i g h ts. T h e message left with the office Some farmers and others ordinance, passed by voters of their lawyer, David Marare concerned about possi- in May 2014, allows farm- kowitz, was not immediately ble cross-pollination between ers currently growing GMO returned. Anti-GMO f a rmers c a l lbiotech crops and those that crops to harvest them this are conventional or organic. season but requires them to ing themselves Our Family The case raises important remove all genetically modi- Farms Coalition joined the questions about food safety fied crops within 12 months. case as defendants in Febru-

could allow the ordinance to take effect in June. Clarke found that the GMO ban is

prohibits ordinances and l awsuits that t r eat a

mon farming practice as a trespass or nuisance, but the law does not protect activities that h arm

agriculture. Clarke also found that state lawmakers intended to per-

&quot;When he said it would be for a church I joked,

&#39;Step back, Bob,a bolt of lightning is going to hit one or both of us.&quot;

PORTLAND — One of Portland&#39;s most notorious strip clubs has been converted-

ter Soobies closed, he was in

where I&#39;d almost had enough of churches and didn&#39;t think

from local Central Oregon High Schools will publish in The Bulletin

To advertise your business contact The Bulletin Advertising Department

ed,&quot; Cline said with a chuckle.

when that was first present-

met Yost, and signed a lease on the former strip club.

dropped byto we lcome them, and bosses at Burgerville and the funeral home are delighted to have quiet neighbors. &quot;A couple people have told us they started praying for this place two years ago.&quot; The congregation began Sunday worship services at the building March 29. &quot;It was so utterly ridiculous

Portland church, but by fall of

they grew into a formal congregation. They rented space Sunday evenings at an east of their own. That&#39;s when they

2014 were eager for a building

touch,and they began meeting monthly for a potluck at

Some who left stayed in

I wanted to be a part of one

son County, but also will

our food,&quot; said George Kimbrell with the Center for Food Safety, a group critical of biotech crops.

States to create GMO-free zones to protect the future of

for a surprise. &quot;When he said it would be for a church I joked, &#39;Step S oobies was k n ow n f o r back, Bob, a bolt of lightning trouble.In 2009,a robber shot is going to hit one or both of a bartender after enjoying a us,&#39;&quot; Yost said, laughing. few lap dances. The Oregon He ended up deciding to Liquor Control Commission give the congregation a deal revoked the club&#39;s license in — about half of w hat he&#39;d 2013, citing a &quot;history of seri- been offered by other proous and persistent problems,&quot; spective tenants. He liked the including drug activity, fights, church leaders, he said, and public urination, noise and believed they could improve public drunkenness. After- the neighborhood. w ard, owners continued offerThe congregation remoding late-night entertainment, eled the interior, swapping but served juice instead of faux leather booths for foldbooze. That only pushed alco- ing chairs and strip poles for hol consumption to the park- music stands. The walls, once inglot. red, have been repainted a &quot;It was the pits, believe me,&quot; soft cream. The liquor shelves said Denny Yost, who owns are gone, as is the mirror that the property. once advertised chicken strips The club shut down last fall, and onion rings. &quot;This is a g r eat metajust months after what police deemed a gang-related shoot- phor for the Christian faith,&quot; ing left one man dead and four Haskins said. &quot;It&#39;s the same on wounded. Neighbors crossed the outside, but totally differtheir fingers, hoping the com- ent on the inside.&quot; mercial building, flanked by For this congregation, rea Burgerville and a funeral newal hits close to home. home, would be repurposed. Most members of Shepherd&#39;s Yost hoped for something Gate hail from another Portbetter, too. But when he met land church where leadership real estate agent Bob Haskins changes hurt longtime memi n the parking lot of t h e bers and sparked an exodus. moved into the building at

farmers should not have to live in fear that our farms will be contaminated by genetically engineered crops.&quot; &quot;This important decision

and the director of Our Family Farms Coalition. &quot;Family

ary after Clarke ruled they had standing and could be affected by a ruling. &quot;We are elatedand could not have hoped for a better outcome,&quot; said Elise Higley, a Jackson County farmer

The Bulletin Serving Central Oregon since 1$8