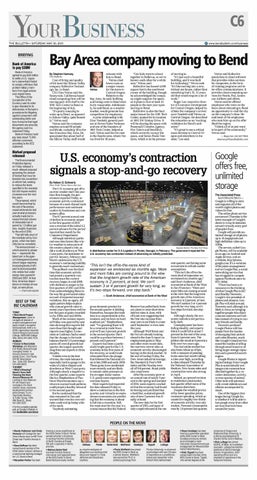 BRIEFING Bank ofAmerica to pay QOM Bank of America agreed to pay$30 million to settle a U.S.regulator&#39;s claims that it failed

to comply with laws that protect military members from legalactions over unpaid loans. The Office of the Comptroller of the Currency said its order is also intended to fix deficiencies in thebank&#39;s procedures for litigating against consumers with outstanding debts and how it ensures that legal documents areaccurate, the agencysaid in a statement Friday. Bank of America must pay backabout 73,000 affected customers, according to theOCC statement.

Biofuel proposal released The Environmental Protection Agency on Friday releaseda much-delayed proposal governing theamount of biofuel that must be blended into conventional vehicle fuel, seeking to reduce thelevels specified in themandate but still require modest increases overthenext fewyears. The proposal, which would becomefinal by the end of November, would set levels for last year at what producers actually madebut increase thetotal volume of renewable fuel required by1.5 billion gallons, roughly 9 percent, bythe end of 2016. That still falls short of

relocate with him to Bend.

Sunnyvale, California-based cloud-computing firm will be moving part of its staff to the 1001 Tech Center in Bend at

the beginning of July. &quot;It&#39;s pretty amazing to wake up in Bend, as opposed to Silicon Valley, quite honestly,&quot; Vetras said. Vetras said the company

employs around 60 people worldwide, including 35 in the

Kollective has leased 4,000 square feet in the southwest corner of the building, though he acknowledged the company might outgrow the space,

for the move to

Central Oregon. Relative to the

Bay Area, he said, building and hiring costs in Bend were fairly reasonable. Additionally, he said Bend, as a smaller market, would generate less

competition for employees. A prior relationship with Dino Vendetti, general part-

ner at Seven Peaks Ventures and one of the founders of

speculated that about half of

1001 Tech Center, helped as welL Vetras said the two met in the Seattle area, where Vet-

the Silicon Valley staff would

that provides video services for companies, in the form of training programs and in-

tricked-out house, rather than

Roger Lee, executive director of Economic Development for Central Oregon, helped faKollective is also the final cilitate the company&#39;s arrival major tenant for the 1001 Tech once Vendetti sold Vetras on Center, named for its location Central Oregon. He described at 1001 SW Emkay Drive. It the relocation as an &quot;exciting will be sharing the space with validation for Bend&#39;s tech Pneuma33 Creative Agency, scene.&quot; &quot;It&#39;s great to see a critical Five Talent and BendTech, which currently occupy the mass develop in Central Orspace, and Seven Peaks Venegon and elsewhere in the tures, which is in the process state,&quot; Lee said. as it plans to hire at least 10

people in the next year upon moving to Bend.

vices for Nestle, Fiat, American Airlines and others.

Vetras said he offered employees who were on the fence about relocating to Bend an opportunity to visit the city on the company&#39;s dime. He said most of the employees who took him up on the offer liked the region. &quot;I think all of us just want to be part of the community,&quot; Vetras said. — Reporter 541-617-7818 shamway@bendbulletin.com

The U.S. economy got off to an even weaker start this year

than first thought, the gov-

Google is willingto store and organize all of the world&#39;s digital photos and videos for free. The online photo service

announced Thursday is the

of decline in economic output in the first quarter of 2015

latest example of Google&#39;s desire to wrap its tentades around virtually everypart of people&#39;s lives. Google will provide unlimited storage of all photos up to 16megapixels and high-definition video up to 1080p. The servi ce,called Google Photos, will be available as an app on Android and Apple devices, and on

was a reversal of the initial 0.2

the countryplayed a role, as did a work slowdown at West Coast ports, the lackluster re-

A distribution center for 0 A Logistics in Pooler, Georgia, in February. The government reported the

port for January, February and March underscores the U.S.

economy&#39;s continuing inability to generate much momentum. The pullback was the third time that economic activity

had posted a quarterly contraction since the current

BEST OF THE BIZ CALENDAR

together in Bellevue, so we&#39;ve known each other for a while

expansionwe envisioned sixm onths ago.More and more folks are coming around to the view that the long-term growth rate of the American economy is 2 percent, at best. We can&#39;t sustain 3 or 4 percent growth for very long,so it&#39;s two steps forward, one step back.&quot;

more folks are coming around

to the view that the long-term — Scott Anderson, chief economist at Bank of the West growth rate of the American

variations, that on-again, offagainpattern helps explain why annual growth rates in gross domestic product for recent years have been wellbe- the second quarter is kidding low thepace ofgainsrecorded themselves, because the trade in the 1990s and mid-2000s. data is so unpredictable at the Much of the revision report- moment, and we have no hard ed Friday was spurred by new numbers yet,&quot; Shepherdson data showing that exports fell said. &quot;I&#39;m guessingthere will more than first thought and be a reversal in trade flows, imports rose higher. Econoand we&#39;ll see 3 percent growth mists at Goldman Sachs noted in the second quarter. But it that the change in the trade could be anywhere between 1 balance shaved 1.9 percentage percent and 5 percent.&quot; points off overall growth last Exports had been aparticquarter, the largest quarterly ularly bright spot for the U.S. drag from net exports in three decades.

rent quarter, are forcing some economists to rethink earlier

Reserve has pulledback from any plans to raise short-term interest rates in June, with

officials now suggesting that the firstrate increase from

near zero is not likely to come until September or even later this year. Although Wall Street and the Fed are already looking

growth for very long, so it&#39;s two stepsforward, onestep back.&quot; Although doudy, the economic outlook is not particularly dark. Unemployment has been falling steadily, and experts think it could fall to about 5

ahead to the June 5 report on

employment gains in May

jobless rate stood at 8 percent a

and other more recent data, the rearviewmirror take on

little over twoyears ago. The real estate market has

economy in the first years of

also been robust as of late,

the recovery, as world trade rebounded from the plunge

buying on the stock market. At

of times, the trade balance is

that followed the financial cri-

especiallyhard to gauge in the wake of a labor dispute and

sis in late 2008 and early 2009. Those gains have moderated more recently and are likely to remain under pressure as

with a measure of pending home sales last month hitting a nine-year high, according to data released Thursdayby

index and the Nasdaq were all off 0.6 percent. Bond yields

the National Association of Realtors. New-home sales and

After the economy grew at an annualrateofnearly 5per-

construction were also strong in April.

Volatile even in the best

Although clearly a negative in the first quarter, some experts like Ian Shepherdson of Pantheon Macroeconomics say a return to normal trade patterns could propel a healthy rebound in the second quarter.

the data released Fridayto show a contraction in the first

quarter, and virtually no main-

mate could end up being wide

to fall into a recession. Still,

stream economists are predicting that the economy is about

the end of trading Friday, the Dow Jones industrial average,

google.com. It&#39;s a variation of thephoto-management tool on Google Plus, a social networking service that has struggledto compete against Facebook since its 2011debut.

&quot;There has been arenaissance in the thinking of what Google Plus is for,&quot; said Bradley Horowitz,

Google&#39;s vice president of photos and streams. Google Plus will stick around, Horowitz said, although it is

bies instead of tryingto connect friends and family. Horowitz predicted

Google Photos will free people from the hassles of managing their picture and video libraries, much like Google&#39;s Gmail service eased the burden of sifting through emailboxes by offeringlargerstoragecapacities and a powerful search

or even species of animal.

cent in the spring and summer

Other tools will automati-

of 2014, some experts conduded that theeconomy had found

last quarter offset some of the weakness elsewhere.

its footing and predicted that

Despite the windfall provided by lower gasoline prices, consumer spending, which accounts for roughly two-thirds

a healthier, sustained growth rateofnear3percentwa sfinally at hand. The new data for the first

of economic activity, was only

lure people away from other

services that have been

quarter of 2015, and signs of only a tepid rebound in the cur-

One of thebiggest challenges facing Google Inc. is whether it will be able to

• Rosa Cendejashasbeen hired as aprevention specialist at the KIDSCenter in Bend. Cendejas previously worked as an emergency room interpreter andperformed case DeRose P arker B utterfieldWolfteich Cendejas Tippett L e Sage managementfor MountainStar • Paula Wolfteichhas joined as a lead investigator of Purdue University, is a licensed Family Relief Nursery. allegations surrounding child the KIDSCenter in Bendas psychologist with over 20years • ShiloTippett has been abuse and neglect in Crook, a clinical director. Wolfteich, of experience as apractitioner, named board member atthe Jefferson andDeschutes who earned herPh.D.in trainer and researcher in the KIDS Center in Bend.Tippett, counties. clinical psychology from field of child maltreatment. who earneddegrees at the