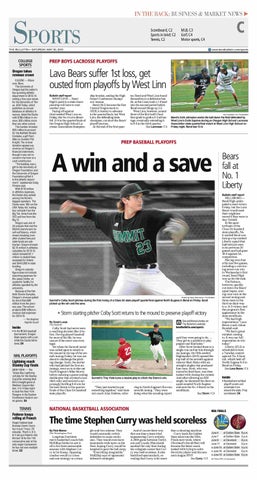 EUGENE — Move over, Bevo. The University of Oregon had thenation&#39;s top-grossing athletic department in 2013-14, ending a five-year streak for the University of Texas. USAToday, which publishes anannual database of athletics finances, listed the Ducks with $196 million in revenue, $35 million more than any other school. The number includes $95 million to account

OHSLA history to advance to the quarterfinals, but West

West Linn, however, scored three of the first half&#39;s final

Friday, the No. 6 Lava Bears fell 13-8 in the quarterfinals of the Oregon High School Lacrosse Association champion-

Linn, the defending state four goals to grab a 5-3 advanchampion, cut short the Bears&#39; tage, eventually extending it playoff journey. to 9-6 in the third quarter. At the end of the first quarSeeLacrosse/C4

High&#39;s quest to a state championship will have to wait another year. Facing off against

themselves in a defensive battle, as the Lions took a 1-0 lead

into the second period before Bend evened things up 2-2. Vern Uyetake / For The Bulletin

donation appears as revenue onOregon&#39;s financial statements, though it was not received in the form of a cash contribution. &quot;The building was a gift to the University of Oregon Foundation, and the University of Oregon Foundation gifted it to the athletic department,&quot; spokesman Craig Pintens said. With $110 million in athletics expenses, the Ducks also ranked among the NCAA&#39;s biggest spenders. The Ducks were10th on the USA Today list, trailing four schools from the Big Ten, three from the SEC andtwo from the Big 12. Oregon was oneof 24 schools that met the NCAA&#39;s benchmark for self-sufficiency, which means breaking even after student fees and state funds are subtracted. Oregon showed $2.15 million in athletics subsidies for 2013-14, which included $1.7 million in student fees assessed for tickets and $440,000 in state funding. Oregon&#39;s subsidy figure does not include operating expensesfor the JaquaCenter, an academic facility for athletes operated by the university. Because of the Hatfield-Dowlin Complex, Oregon&#39;s revenuespiked by more than $80 million from the previous year. Theschool projects $98 million in revenue andexpenses for 2014-15. — The (Eugene) Register-Guard

Inside • In the NCAA baseball tournament, Oregon State opens with a win while the Ducks fall to lowa,C4

Bend High anticipated a road victory Friday, but the Lava

Bears would need their mightiest sword if they were to

slay Goliath. In the quarterfinals of the

Class 5A baseball state playoffs, No. 8-seeded Bend was

facing a top-ranked Liberty squad that had lost just once

in its previous 20 games and had gone it&quot; ~

competition. Having won four of its last five games,

including a convincing seven-run win in Wednesday&#39;s first round, Bend High was up for the task. The Falcons,

however, quickly cut down the Bears&#39;

Summit&#39;s Colby Scott pitches during the first inning of a Class 5A state playoff quarterfinal against North Eugene in Bend on Friday. Scott picked upthewin and the save.

Tampa BayLightning will play for the Stanley Cup after winning their third straight gameat Madison SquareGarden, 2-0, Friday night to beat the NewYork Rangers in the Eastern Conference finals in seven games,C4

consecutive year at the only major tournament he has not won multiple times,C2

the program&#39;s first appearance in the state semifinals.

a coaching decision like it before. Having played baseball said they were going to do.... They got in a position to play pepper and find holes.&quot;

for most of his life, he was

unsure if the move was even legal. Yet when the Summit junior

After Scott limited them to a

was called upon to return to the mound in the top of the seventh inning Friday, he was not about to challenge the pitching change. Scott, the starter

single run on four hits through six innings, the fifth-seeded Highlanders (20-9) opened the top half of the seventh against reliever Matt Hicks with six

who had pitched the first six

innings, went on to strike out North Eugene&#39;s Mike Morris beforeinducing a game-ending double play that stymied a lastditch rally and secured a surprisingly thrilling 8-6 win for the host Storm in the quarter-

four runs. Scott, who was moved to third base, was then

finals of the Class 5A baseball

upset hopes, scoring nine runs in the second inning and

in. It was our full expectation to win

today.&quot; Liberty (25-2) is scheduled to host a Tuesday contest

against No. 8 Summit, which held off North Eugene 8-6 in

And after allowing an RBI

single, he slammed the door on upset-minded North Eugene

• Baseball and softball playoff scores and schedules from around the state. Prep scoreboard,C4

and sent the No. 4 Storm to the semifinals. SeeStorm /C4

And of course there was that one time a team tried

than a shooting machine.

State team into the NBA Finals next week, where

all in his three memorable

gle-and-two scheme. They would constantly switch defenders to cause confusion. They would even leave teammates wide open on the floor, hoping Curry would be

tempted to pass the ball away.

his collegiate career that Cur-

ry in his lineup. Opposing coaches would try a box-

and-one strategy or a trian-

son and Loyola (Maryland) marked the only time during

tasked with trying to solve ry was held scoreless. It also the tricky player and this season&#39;s league MVP. backfiredspectacularly,revealing that Curry is far more SeeCurry/C3