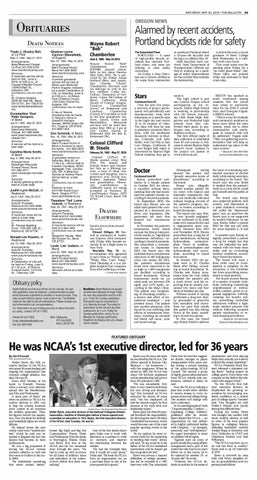 A graveside service on

Saturday, May 30, at 11:00 a.m., will be held at Franklin Cemetery, 92341 Applegate Trail, Junction City, OR. A Memorial Service at Awbrey Place will be held at a later date. Contributions may be made to:

land riders, and some are rallying t o r a ise s afety awareness. On Friday, a Jeep Cherokee and a bicycle collided at the same busy intersection

(Jerry) of R edmond and

geles hospital from complications after suffering a stroke. — From wire reports

Obituary policy Death Notices are freeandwill be run for one day, but specific guidelines must be followed. Local obituaries are paid advertisements submitted by families or funeral homes.They may be submitted by phone, mail, email or fax. TheBulletin reserves the right to adit all submissions. Please include contact information in all correspondence. For information on any of theseservices or about the obituary policy, contact 541-617-7825. Phone: 541-617-7825

can Express. Died unexpectedly Friday after become seriously ill on a flight home to

ond in command at Ameri-

his leg in a collision May 10. Both bicyclists have sur-

they&#39;re working on a package of safety improvements for the corridor that includes the intersection.

A mile to the east, a recent

graduate of Reed College died Wednesday in a collision with a tow truck.

That crash scene was the starting point Friday for a &quot;no more ghost bikes&quot; ride. Ghost bikes a r e p a i nted white and stationed at fatal

RECON has sparked so much excitement among

a network of project participants will periodically and

may create an astronomy class for the 2016-17 school year, said Georgina Fugate,

Continued from B1 Over the next five years,

telescopes on a specific spot in the night sky and record 15 to 20 minutes of video. The data will then be sent

&quot;This is a way for students my Club. Bend High, Ridgeview and Redmond high and community members to schools have also c on- learn more about the solar firmed their plans to par- system, reach out to other

Keller, with Cal Poly in San Luis Obispo, California. If a new Kuiper Belt object is discovered by Madras High School students, they get to

June 10 and anyone is welcome to attend Madras High School&#39;s event. Updates to

the project are posted at www.tnorecon.net.

ipate in research that will be published,&quot; Fugate said. &quot;They are gathering new information that will help us understand our place in the solar system.&quot; — Reporter: 541-383-0354, jrockow@bendbullettn.com

S ubsequent test i n g the issue of consuming subshowed the patient had stantial amounts of alcohol &quot;grossly excessive levels of daily while taking narcotics, Continued from 61 Kenny prescribed anti- testosterone,&quot; according to according to the board. The biotics to a female patient the board. board says she also failed in October 2013 for chronKenny a ls o a l l egedly to explore how the patient&#39;s ic tonsillitis without docu- treated another patient for work as a truck driver could menting that she had exam- six years with topical and put himself and the public at ined the patient&#39;s tonsils, ac- injectable testosterone that risk. cording to board documents. was not medically indicated The board says Kenny In September 2008,the without keeping records of also subjected patients with board says Kenny saw an the patient&#39;s progress, his- anxiety and depression to adult male patient who com- tory or exams, according to a gene mutation screening plained of a decreased sex board documents. she called the &quot;depression drive and impotence.She The board also says Ken- gene&quot; test, an assertion the p erformed la b t e st s t h a t ny was &quot;grossly negligent&quot; board says is not supported showed low t e stosterone in her treatment of an adult by medical literature. In one levels. male with osteoarthritis and case, Kenny billed a patient In November, the patient&#39;s a degenerative spine con- $525 for that test and tests testosterone levels tested dition. Between June 2013 for acute hepatitis A, B and normal, but Kenny interpret- and November 2013, Kenny C. ed the results as &quot;significant prescribed him a long list of In another case, Kenny altestosterone deficiency,&quot; ac- pain medications, including legedly prescribed a patient cording to board documents. hydrocodone, acetamino- a drug for weight loss that She prescribed a testoster- phen, Norco (a combina- was not indicated for indione cream. In September tion of acetaminophen and viduals with her body mass 2010, the board says she hydrocodone) and oxyco- index and no co-existing switched that to testosterone done, according to board medical conditions, accordinjections of 400 milligrams documents. ing to board documents. every two weeks. By 2013, In October 2013, the paThe board w il l i s sue a the p a tient&#39;s t e stosterone tient went t o S t . C h arles final order once its inveslevels were measured to be Bend after falling, accord- tigation is complete. In the as high as 1,400 nanograms ing to board documents. St. meantime, it has forbidden per deciliter, according to Charles sent Kenny docu- her fromprescribing testosboard documents. Normal ments from the visit, which terone to male patients. t estosterone levels for a n included the patient&#39;s job, The board accuses Kenny adult male are between 270 a truck driver, and his re- of a number of statute violang/dL and 1,070 ng/dL, ac- porting that he usually con- tions, including committing cording to the Mayo Clinic. sumed two beers and four unprofessional or dishonThe patient was complain- shots of whiskey per day. orable conduct, gross or reing of shrinking testiclesWithout record of having peated negligence, willfully a known side effect of tesperformed adrug test,Ken- violating the b oard&#39;s stattosterone treatment — and ny proceeded to prescribe ute, prescribing controlled prostate issues. The patient him morphine and oxyco- substances without a legitsaw another physician, who done for pain that month imate medical purpose and found he was suffering side (the patient was also taking without following accepted effectsof testosterone treat- Norco at the time), accord- p atient examination or r ecord-keeping procedures. ment, including an elevated ing to board documents. red blood cell count, acne In this case, the board — Reporter: 541-383-0304, and mood swings. says Kenny failed to address tbannow@bendbullettn.com

He was NCAA&#39;s1st executive director, led for 36 years By Jim O&#39;Connell The Associated Press

Walter Byers, the first executive director of the NCAA

who spent 36 years leading and shaping the organization that oversees college athletics, has

died. He was 93. Byers died Tuesday at his home i n

when a urinary tract infection spread into his bloodstream, son Fritz said Wednesday.

A main part of Byers&#39; job when he started as NCAA executive director in 1951 was

to help the schools maintain strict control of all revenues the athletes generated. Then,

the figures weren&#39;t too impressive. Now, the deals for football and basketball rights are worth

lete,&quot; which he said was intended to disguise the fact that

players had become de facto professionals. He was a big proponent of having the NCAA oversee women&#39;s athletics as well and that came to fruition in the ear-

Byers was 29 years old when Press that he had first suggested drasti c changes in player offices opened in Kansas City, compensationthree years earMissouri — his hometownlier during a private meeting with five employees. When he of the policy-making NCAA retired in 1987, the NCAA had Council. The council, a group about 150 full-time employees of highly placed administrators and its membership had grown from NCAA schools and confrom 381 schools to 1,003. ferences,refused to listen,he he was hiredbythe NCAA. The

sald. Now, the NCAA is refining a

amateurism and level playing fields, they actuallyare a device to divert the money elsewhere.&quot; NCAA President Mark Emmert released a statement not-

ing Byers&#39; &quot;lasting impact on collegesports,from thosewho compete on the field to the educators who support them.&quot; &quot;As the NCAA&#39;s first full-

time executive director, he but very strong and demand- plan that would allow athletes shepherded the growing asing,&quot; Tom Jernstedt, an NCAA to receive money to cover ex- sociation by encouraging acaexecutive for almost 40 years penses of normal college living. demic excellence as a central said, &quot;but his employees all The number will change with part of college sports,&quot; Emmert had the utmost respect for him each conference. said. &quot;Our thoughts are with because of his work ethic and In his autobiographical book Walter&#39;s friends and family &quot;Unsportsmanlike ConductCharles Gorry 1 The Associated Press file photo leadership values.&quot; during this difficult time.&quot; Walter Byers, executive director of the National Collegiate Athletic Byers gave the then-28-year- Exploiting College Athletes,&quot; During his tenure Byers Association, testifies in Washington before a House special subold Jernstedt the responsibility published after he r etired, was brought into conflict with committee on education in 1973. Byers, the first executive director for directing the men&#39;s Division Byers blasted the NCAA — an many wealthy alumni, as well of the NCAA, died Tuesday. He was 93. I basketball tournament, which organization he had defend- as some of the most popular would become one of the most ed in highly publicized battles figures in collegiate history, popular sporting events in the with Congress — as arrogant, including basketball coaches former Big Eight and Big Ten One of the first duties Byers world. autocratic and &quot;self-righteous.&quot; Adolph Rupp at Kentucky and &quot;In my opinion he never re- He urged lawmakers to enact Jerry Tarkanian at UNLV and Commissioner Wayne Duke gave Duke was to work with said Wednesday from his home television as a partner to work ceived credit for his leadership an athletes&#39; bill of rights. Oklahoma football icon Bud &quot;Against such an array of Wilkinson. in Barrington, Illinois. Duke on contracts and improve in building that event,&quot; Jernst&quot;The NCAA was born in criw as Byers&#39; first hire at t h e the relationship between the edt said. &quot;In my mind he is the power stands theyoung athlete, NCAA and the two remained entities. father of the NCAA basketball unorganimd and a part of the sis and has lived in conflict,&quot; &quot;He had the foresight then tournament and he doesn&#39;t get system for only four to sixyears Byers said in an AP interview dose through the years. &quot;He had to come up with structure that it would all come about,&quot; the recognition for that.&quot; before he or she moves on to in 1976. for all kinds of athletics, team Duke said. &quot;He took the NCAA Byers was always a staunch be replaced by another 18- or Byers is survived by sons and individual, at the nation- from an organization run on defendant of college amateur- 19-year-old,&quot; he wrote. Fritz and Ward, daughter El&quot;Whereas the NCAA de- len, six grandchildren and two al level. Before him there was a part-time basis to one of the ism but he revealed in a 1987 nothing.&quot; most powerful in sports.&quot; interview with The Associated fends its policies in the name of great-grandchildren.