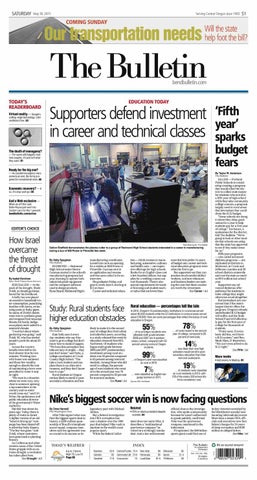 in careeran ec nica casses ! U

— For some still-happily-married couples, it&#39;s just not what they want.D1

By Taylor W.Anderson The Bulletin

that would allow the district to collect state money

for students who enroll in a fifth year of high school while they take community college courses, a program largely used in rural areas that lawmakers fear could drain the K-12 budget. &quot;Some schools are doing it where they delay graduation for a year to help

And a Wed exclusiveWhen an off-the-rack Rolls-Royce just won&#39;t do: Custom cars for the1 percent. beuttbulletiu.cum/extras

peak of the drought, Shabi Zvieli, an Israeli gardener, feared for his livelihood. A heftytax was placed

Dalton Sheffield demonstrates the plasma cutter to a group of Redmond High School students interestedin a career in manufacturing during a tour of Mill Power in Prineville this week.

By Abby Spegman The Bulletin

manufacturing coordinator, turned him on to an opening for a welder at Mill Power in

to see if they make sense forus.&quot;

most districts prefer. In years

of budget cuts, career and techand health care — are expennical educationprograms were Prineville. Guzman sent in sive offerings for high schools. often the first to go. an application and resume Books for an English class cost But supporters say they can and was soon called in for an a few hundred dollars, but sup- producemuch-needed skilled interview. plies for a welding course can workers, and now educators He graduates Friday and cost thousands. There&#39;s also andbusiness leaders are makgoes to work June 8, starting at special requirements for teach- ing the case that these courses $12 an hour. er licensing and student-teachare worth the investment. Career and technical educa- er ratios that are lower than SeeCareer/A4

replicated at districts in

Redmond, in Crook and Jefferson counties and 26 school districts statewide

and cost the state as much as $9.5 million last school year. Supporters say advanced diplomas offer pathways for students to enter college they might otherwise avoid altogether.

But lawmakers are con-

ming pools or leaky pipes. So many of Zvieli&#39;s clients went over to synthetic grass and swapped their seasonal

&quot;I worried about where gardening was going,&quot; said Zvieli, 56, who has tended

likely to make it to the second

year of college thantheir urban and suburban peers, according

Kate Soliz sees it every day: students who say they want to go to college but don&#39;t know howtomake ithappen.

&quot;We have this perception that

Israelis were told to cut

their shower time by two

minutes. Washing cars with hoses was outlawed and those few wealthy

atnight. &quot;We were in a situation

where we were very, very close to someone opening a tap somewhere in the

County High School. &quot;You take a rural student and you place them in an alien envi-

to a study released this weekby

cerned that if the state&#39;s largest district offers the

will suffer, and the State

dents was 55 percent compared to 63percentamong nonrural students. Among those who did

enroll in college, the percentage of rural students who went on to the second year was 78

... of rurals lasted to the second y e ar of college, compared to 83 percent of nonrurals.

14&#39;/o ... less likely that rural high schoolers would enroll in postsecondary education than their nonrural couterparts.

School Fund will effectively pay for the first year of collegeforthousands of students. &quot;Pretty soon, if everybody did this, we&#39;d have a K-14 system,&quot; said Sen. Mark Hass, D-Beaverton. &quot;We can&#39;teven afford to do

More inside • Astronomy in Madras,B1

country and no water

would come out,&quot; said Uri Schor, the spokesman and of the government&#39;s Water

Authority. But that was about six

years ago. Today, there is plenty of water in Israel. A lighter version of an old &quot;Israel is drying up&quot; campaign has been dusted off to advertise baby diapers.

&quot;The fear has gone,&quot; said Zvieli, whose customers have gone back to planting flowers.

As California and other western areas of the United

After Nike signed what was But a federal investigation then the biggest sports deal in into FIFA corruption has history, a $200 million sponcast a shadow over the 1996 sorship of Brazil&#39;s triumphant pact that helped Nike vault to soccer squad, company execstardom in the world&#39;s most utives said the agreement was popular sport. as crucial to its success as its While the federal indict-

States grapple with an ex-

official close to the investigation, who spoke anonymously because he wasn&#39;t authorized to speak publicly, confirmed

its key victories tarnished by the blockbuster scandal now

ment does not name Nike, it

Nike was the sportswear

company mentioned in the

If implicated, the $88 billion sports giant could find one of