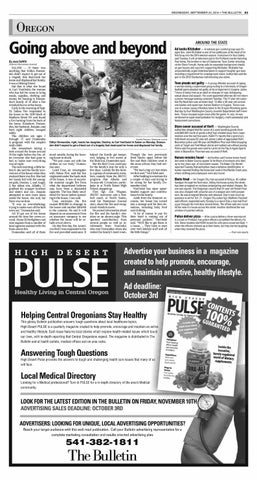 REGON AROUND THE STATE

oin a ovean e on

egon Gov.John Kitzhaber is one of two politicians at the heart of its first foray into the 2014election season. Everytown for Gun Safety said Tuesday it will air television ads in the Portland market featuring Paul Kemp, the brother-in-law of ClackamasTownCenter shooting victim Steve Forsyth. Kempcalls for expanded background checks on gun buyers andsays he&#39;s supporting Kitzhaber. Kitzhaber has unsuccessfully urged state lawmakers to support tougher gun laws, including a requirement for a background check. Authorities said the gun in the 2012Clackamas mall shooting was stolen.

anything that Edilyn Domenden didn&#39;t expect to get out of a tragedy that destroyed her home and displaced her family, it was a lifelong friend.

But that is what she found

in Cari VanOsdol, the woman who has led the cause to bring meals, supplies, clothing and money for housing to Domendon&#39;sfamily of 10 after a fire

Teen pleads not guilty —Ayoungoffender accusedof raping a woman during a supervised group outing to a University of Oregon football game pleadednot guilty at his arraignment in Eugene.Jaime Tinoco is being tried as an adult on charges of rape, kidnapping, sexual abuseandassault. His court-appointed attorney did not return aphonemessage seeking comment Tuesday.The17-year-oldsuburban Portland teenwas arrested Sept. 13after a 39-year-old woman was beate nandrapednearAutzenStadium inEugene.Tinocowas one of a dozenyoung offenders taken to the Oregon-Wyoming game that day by four Washington County Juvenile Department staff members. Tinoco escapedsupervision after the game. In July, hewas sentenced to supervised probation for burglary, meth possession and harassment convictions.

wreaked havoc at the home.

Early in the morning of Sept. 10, Salem Fire responded to the house in the 1100 block of

Madison Street NE and found a fire burning from the back of the home. Somehow, Domen-

don,herhusband,Joaquin,and their eight children escaped safely. The children are ages 1

is pregnant with the couple&#39;s Edilyn Domenden, right, hands her daughter, Destiny, to Cari VanOsdol in Salem onMonday. Domenninth child.

den didn&#39;t expect to get a friend out of a tragedy that destroyed her home and displaced her family.

She remembers taking a look around the house around 10 the night before the fire, af- stood outside, facing the burn- helped the family get tempoter everyone else had gone to inghouseinshock. rary lodging in two rooms at &quot;We just came out with the the Shilo Inn, Domenden said. bed, to make sure everything was all right. clothes on our body,&quot; DomenBut the Red Cross could pay The next morning, a little be- don said. for the family&#39;s stay for only a fore 6, she said the family scurLaird Case, an investigator few days. Luckily for the famiried out of the house when they with Salem Fire, said the fire ly, a group of community memrealized there was fire. She had originated under the back deck bers, namely from the JROTC her hands full with the young- of the house. A box of recycla- program that Alladin and est girls, Destiny, 1, and Angel, ble material caught fire from 14-year-old Crystalynn partic2; her oldest son, Alladin, 17, what the department believes ipate in at North Salem High grabbed his younger brothers may have been a discarded School, stepped up. and sisters and ran. Joaquin cigarette. The box likely smolFirst Sgt. Ji m W agner, attempted to save more items dered for hours before spread- JROTC instructor and a footinside the house, she said, but ing to the house, Case said. ball coach at North Salem, there was no time. &quot;It was so overwhelming,

caused $100,000 in damage to trying to make sure all the kids the house and another $20,000 were out,&quot; Domendon said. to the contents. He said it will All 10 got out of the house depend on an assessment from aroundthetime fire crews ar- an insurance company to see rived. About 35 firefighters and whether the house will be renine engines from a number of built or torn down. local agencies assisted with the On that first day, the Amerithree-alarm fire. Domendon said all of them

Though the two previously lived blocks apart before the

fire and their children went to

the same school, they had nevermet.

&quot;We had a big cry fest when we first met,&quot; VanOsdol said. After holding in emotions for a couple of days and trying to be strong for her family, Do-

Shots fired —An Oregon City man accused of firing a.45-caliber handgun through his front door, hitting the houseacross the street, has been arraigned on reckless endangering and related charges. No one was injured. TheOregonian reports that 31-year-old Robert Fear was also charged with unlawful use of aweaponand meth possession. He wasarraigned Monday and released. Fear&#39;s next court appearance is set for Oct. 21. OregonCity police Sgt. Matthew Paschall said officers respondedearly Sunday to a report that a manhadfired a gun through his front door several times. Theofficer said one round hit the side of a houseacross the street. Another shattered the rear window of a parkedvehicle.

menden cried. VanOsdol has since spear-

headed support and contributions for the family.

Aside from the donation accounts, her house has turned

story about the fire and recog- into a storage unit for item donized Alladin&#39;s name. nations, including baby food He posted information about and clothing. &quot;A lot of money to pay for the fire and the family&#39;s situation on an alumni page. This their hotel is coming out of sparked contributions from personal pockets,&quot; VanOsdol several people as well as in- said. &quot;We&#39;d like to get them in volvement f ro m

Police deliver pizza —After a pizzadelivery driver was injured in a crash in Portland, two police officers completed the delivery for him. Steve Huckins told KOIN he and his wife wereconcerned Sept. 1 when the officers showed up attheir home, but they started laughing when they received the pizza.

who met Domenden when she over with kitchen stuff and all fire and provided assistance. It visited the family&#39;s hotel room. the little things.&quot; can Red Cross responded to the

and healthy lifestyle. Each issue features local stories which explore health-related issues which touch Our liVeS, With in-dePth rePOrting that Central OregonianS eXPeCt. The magaZine iS diStributed in The Bulletin and at health OutletS, mediCal OffiCeS and on area raCkS.

LOOking fOr a MediCal PrOfeSSiOnal? Turn to PULSE fOr a in-dePth direCtOry of the area&#39;S MediCal