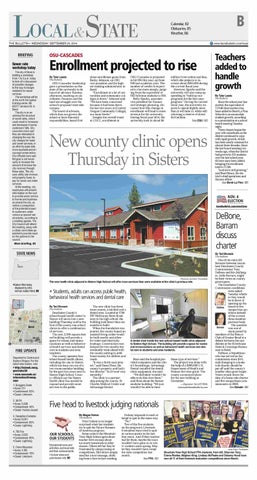 Calendar, B2 Obituaries, B5 Weather, B6

BRIEFING Sewer rate workshoptoday The city of Bendis holding a workshop from1 to 5 p.m. today to kick off a discussion of possible changes to the way it charges residents for sewer services. The workshop will be at the north fire station

training center, NE 63377 Jamison St. in Bend. The city is re-examining the structure of sewer rates, which could result in increases and decreases in some customers&#39; bills. City councilors havesaid they are interested in changing the waythe city charges for water and sewer services, in an effort to make bills more equitable andencourage conservation. City officials havesaid the goal is not necessarily to increase the amount of revenuethe city receives through these rates. Thecity uses utility rate revenue, not property taxes, to pay for sewer andwater services. At the meeting, city employees will present information on the cost to provide sewer service to homes andbusinesses around the city, as well as a comparison of the potential impact to customers under various proposed rate structures, according to a meeting agenda.The City Council will attend the meeting, along with a citizen committee appointed to provide input on the options to the council.

about enrollment gains from

Becky Johnson, an OSU vice president and the high-

OSU-Cascades&#39; leadership gave a presentation on the state of the university to its

board of advisers Tuesday

&quot;Enrollment at a lot of universities and community col-

rollment, finances and the land use struggle over the

OSU-Cascades is projected to hit 994 this year, up from

and strategic planning, discussed how this change in

enrollment will lead to more

than it will take in, while still

retaining a reserve of about $1.8 million.

number of credits is expected to rise more steeply, jumping from the equivalent of 502 full-time students to 550.

leges is down,&quot; Johnson said. &quot;We have been concerned because it had been down

campus. The board of advisers, school or have financial responsibilities, heard first

the last two years at (Central Oregon Community College), our main feeder.&quot; Despite the overall trend

which does not govern the

at COCC, enrollment at

Since the school year has started, the equivalent of 7.3 full-time teachers has

been added to Bend-La Pine Schools to accommodate

student growth, according to a presentation at a school board meeting Tuesday night. Three classes began the year with substitutes as the

district continued to cope with rapid growth, which has been nearly constant for

almost three decades. Since the last board meeting two weeks ago, when the district

had grownby 331 students over the last schoolyear, 62 have since been added,

By Ted Shornck The Bulletin

One of the main differencesbetween incumSalem

The new health clinic adjacent to Sisters High School will offer more services than were available at the clinic&#39;s previous site.

Deschutes County&#39;s school-based health center in Sisters will move into a new

Tuesday whether they would be in favor of

The new clinic has three exam rooms, a minilab and a dental area. Located at 1700 SW McKinney Butte Road, next to the high school, the

building Thursday and be the building took fewer than six first of the county-run school months to build. clinics to offer a combination

When the foundation was

The question was one of

of services. The new, 2,500-square-foot red building will provide a space for exams and immunizations as well as behavior-

poured, the county hoped an A dental chair inside the new school-based health clinic adjacent to Sisters High School. The building will provide a space for exams

debate between the can-

delayed for two months but

care to students and area residents.

eventually went ahead with

rant in Bend. DeBone, a Republican who has served on the

school-based health clinics, including the one in Sisters,

members of the Rotary Club of Greater Bend at a

be built nearby and allow for water and electricity

the county putting in additional money for utilities and 1&quot;oads.

vided computers and the clin-

Department of Health and

for the past two years next to

smoothly.&quot; The clinic is a partnership among the county, St. Charles Medical Center and

Human Services grant. The county announced plans for the new building in

which has been run out of a

health clinic has needed to

able to do this over there,&quot; said Ross about the former

expand and provide more services to the public.

Traci Dulany is no longer surprised when her students

OUR SCHOOLS, OUR STUDENTS

try to quit the Future Farmers of America program. Some come to the Mountain View High School agriculture teacher with excuses about

too much homework in other classes. Others tell her they&#39;re frustrated by always losing at competitions. Still others simply send her a text message, shirking from a face-to-face meeting.

modular building. &quot;We just wouldn&#39;t be able to have

didates at the Riverhouse

commission since 2011, said changing to a home rule charter should be put off until the county&#39;s smaller cities grow larger. Voters struck down the

idea of a home rule charter and five nonpartisan com-

Dulany responds to each attempt to quit in the same way. nNO n

Two of the five students on the program&#39;s Livestock Evaluation team tried to quit

at various points in the last four years. And if their teacher had let them, maybe the team

won all 11 of their livestock evaluation competitions since March.